McDowell's De’vion Tate has hops. Which is good, because he is a jumper.

To paraphrase his event coach, De’vion Tate has hops.

The Erie McDowell senior has been displaying his hops at a high level this winter in the long jump and is looking forward to bigger and better things in just his second year in track.

“He has really, really good jumping ability as far as vertical goes,” coach Randy Gunther said of Tate. “His speed is not great, although it’s very good. He’s not a 100-meter guy, but it’s good enough to translate into the long jump very well.”

In 2011, Tate turned to the sport to sharpen his skills in another pursuit. It didn’t take long for him to switch his No. 1 sports.


Photo from the 2011 PIAA District 10 Championships by Carl Strub 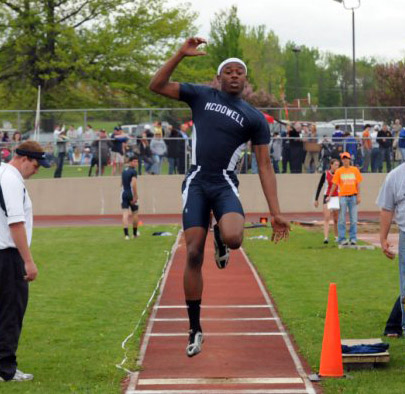 “I came out for track to get better for football, but I fell in love with track,” said Tate, who was eighth and final medal winner in the AAA long jump last May at Shippensburg. “So I stopped football and got all into being a track man.”

Tate will return to Edinboro University’s year-round dome Saturday for the Tri-State Coaches championship meet. He got his season off to a strong start on January 20 with a leap of 22 feet, 7 inches, which was No. 1 in the state for the next three weeks and almost a foot better than his outdoor best.

Gunther noted that Tate’s stock in the event will continue to rise as he learns more about jumping long.

“His work ethic has greatly improved,” the coach said. “And his knowledge, he had no knowledge (about the long jump) coming into this. And he has really done work on his own to learn the event.”

On February 4, Tate was first at Edinboro with a jump of 22-0, an effort that he believes is a sign of better things ahead.

“I’m not good at hitting the board all the time, but today I found the board so I think I will be good for the rest of the season,” he said afterward. “I just need to work on my form while I’m in the air. My body and my mind are telling me to go straight down, but I need to keep going.”

In addition to competing in the 60-meter dash, Tate has added the triple jump to his repertoire.

“That will come,” Gunther said of Tate’s progress in the triple jump. “It’s going to take a little longer, but that will come.”