Take your pick, and Hanna Green has compiled some solid credentials in her high school running career. And if the opening weeks of the indoor season are any indication, the Greater Latrobe standout will be updating her athletic resume quite often in 2013. 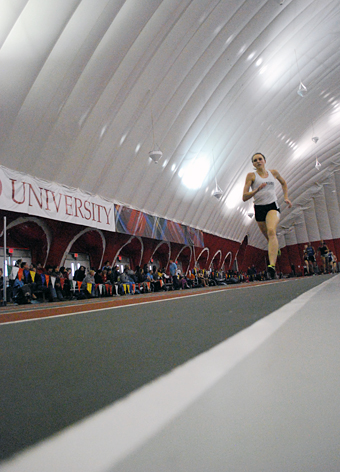 A senior, Green debuted January 12 at Edinboro University with a show of fitness and speed in the 400-meter dash. Despite it being a virtual solo effort as she finished more than 5 seconds up on the field, the Wildcat’s performance went straight to the top of the Pennsylvania rankings, a state-leading 57.35-second clocking. At the time, the sprint was also No. 6 nationally.

“When we started the indoor workouts, I could tell right away that she was in pretty good shape from working with Coach Todd Simpson during this recent cross country season,” said Tony Mehalic, Greater Latrobe’s indoor head coach. “She was hammering away at the workouts and pushing herself pretty hard.

“I knew that she was going to run fast this indoor season, but I didn't think she would post these fast of times this early in the season. (The coaches) worked on her starts during the outdoor season, which was something else she was able to bring to the table this indoor season.”

“I was surprised,” she said matter of factly. “I knew my conditioning was good. I have been doing a lot more this year to get ready for it. I thought I was going to run maybe a 59, 58, so 57 was definitely really a surprise.”

Her 2013 opener should have come as no surprise to the knowledgeable observer. Headed for Virginia Tech, Green is a four-time qualifier to Hershey in cross country and has been to Shippensburg in May each of the past two years.

As a sophomore, Green made headlines at the WPIAL championship meet, winning the 800 in a still-PR 2:16.39 and finishing as the runner-up in the 400.

“It used to be my strategy when I won WPIALs two years ago,” Green said of locking herself into place off the outside shoulder of the early leader. “I ran behind the first-place runner until the very end and outsprinted her. 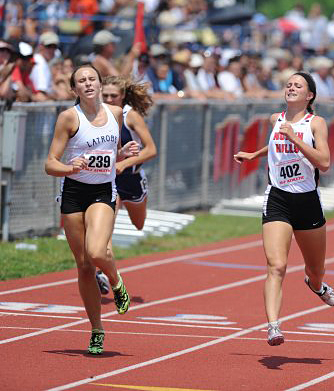 However, a year ago, Green did step up to receive state hardware, but this time she was running the 400. Off her PR in the one-lap WPIAL final, she was able to grab fifth in 56.13.

Greater Latrobe’s coaching staff believes Green’s two focuses on the track – 400 and 800 – have helped her overall development and strength as she wraps up her high school career.

“The 400 has become one of her stronger events,” Mehalic said. “She has only had one opportunity to run just the 800 to see what kind of time she could run because of the tight timeframe between the two events. We haven't seen her best 800 meters yet.

“The 800 has helped improve her 400 finish in the last 75 meters of the race when she was getting a little fatigued. On the other end, the 400 has helped her increase her pace in the 800 in the first half of the race.”

After a 2:18.95 on January 18 on the tight, sometimes-unforgiving oval at Slippery Rock University, Green added another bolded statement to her running resume in the dash. Her 56.99 effort in the 400 at the Tri-State Coaches meet on February 2 was worth No. 2 on the state charts and No. 14 in the U.S.

“I think they are both difficult,” said Green, who also runs anchor or leadoff on Wildcat relays. “I like the 4 better because you give it all you’ve got, and when you’re finished, you just don’t have anything left to give.

“In the 800, I normally have extra energy left at the end. I guess I still haven’t figured out how to run that one exactly.”

It didn’t take Green long to get back on top in Pennsylvania – and to No. 8 nationally – as her coach said “Hanna was after improving her 400m time” in Saturday’s SPIRE High School Showcase in Ohio. The senior dropped her indoor best to 56.32 in a duel to the finish with Michigan’s Paige Patterson, who won in a PR 56.15.

“That was the first time I ran with real competition (this year),” Green said. “That definitely helped out a lot. I was running more scared I guess. I was first at the break and in the lead pretty much until the end. (She) caught me at the end. I knew it was fast.”

In several months, the dash part of Green’s resume might not see as much activity as the interior design major is being penciled in as an 800 specialist at Virginia Tech.

Before she heads to Blacksburg, Va., there’s still time to add another accomplishment or two to her credentials. And the goal is simple – a state gold medal.