Ok, so it isn’t the proverb you learned as a child, but it was quite appropriate for the 2013 edition of the Sharpsville Blue Devil Invitational as heavy morning rain turned a dry circuit into a sloppy one once hundreds of harriers took the starting gun.

He was the first up Kite Hill after the start of the boys’ race, but Jeremy Parsons wasn’t expecting to have a solo run at the front. He figured it would come down to the final mile on the double-loop course to determine a winner. 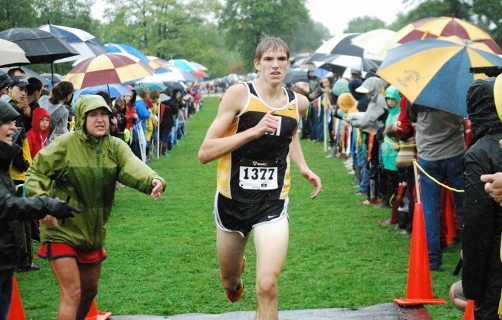 The Maplewood senior was able to shake off a pair of challengers at the two-mile mark and cruise to victory.

“They were ahead of me quite a bit during the race,” Parsons said of Pittsburgh Central Catholic’s Jeff Van Kooten and North East’s Gary Olson. “It got me scared there for a little while, but I didn’t want to let myself down so I continued to push through it.

“All the tight corners in the woods, I couldn’t run tight corners (because of the mud). I had to go to the outside where it was somewhat dry. That benefited me a little bit, but (Olson) kept taking the inside and he got a little bit out of it.”

Fourth a year ago, Parsons had a stride on Olson as the lead pair exited the woods for the last time. Despite a steady rain and accumulating mud, Parsons almost duplicated his 2012 time of 16:34.1 that was achieved under drier, faster conditions as he pulled away and was the first to reach the umbrella-lined final straight and the chute.

“This course doesn’t really deal well with rain, that’s for sure,” said Parsons, who was the winner in 16:35.9. “It always gets muddy really quick. (I had) kind of been getting used to the nice weather and the dry courses, and then we have this one. It caught me off guard.”

A state medalist last year in Class A, Parsons said Saturday’s victory means a lot to him and his 2013 season.

“This was always one of my goals from the time I first raced here because it was always a huge race,” Parsons said. “It just seemed to me it was a huge honor to win the Sharpsville Invitational with all these kids here – triple A, double A, single A all in the same race.”

The team battle wasn’t nearly as close as the race for individual glory as Class AA Grove City outdistanced a pair of Class AAA teams from District 7 in the invitational that annually shapes up as a preview of the District 10 meet on the same layout. The Eagles, who were a close second last year in the state championships at Hershey, were winners Saturday with 107 points to 184 for Central Catholic and 250 for Moon Area. 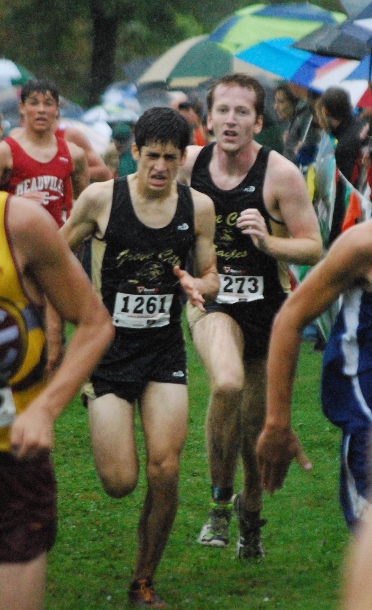 “I was pretty pleased,” coach Mike Sample said. “I think we ran closer as a top 5 than we have all year. So that’s a positive thing to remind them of.”

The Eagles also added an eighth from Ryan Budnik in 17:09, while Nos. 3 through 5 for Grove City were only separated by about 5 seconds.

“Our No. 5 runner has changed hands a number of times,” Sample said of his varsity lineup. “We have about four or five guys that can run as my No. 5. They are all within 10 seconds of one another.

“I told them today someone needed to step up and solidify that spot and also move closer to No. 4. We have a nice 1 through 4, No. 5 is too far back.”

In looking ahead at the return trip to Buhl Park in five weeks when tickets to Hershey are at stake, the Grove City coach said his top two runners are critical to his squad’s success.

“Those two set the tone at practice, and they are also capable of making sure that the rest of the team members know where they need to be,” Sample said. “They are leaders in themselves, but over the years, we’ve had a number of individuals who know what it takes to get not one or two individuals to states but get a team to states. (Benka and Budnik) are feeding off the prior success of the program.”

Umbrellas and boots were the order of the day, and North East’s Emma Verdonik couldn’t have been happier.

A self-described mud runner, the senior eased to the front and then withstood a final challenge to grab top individual honors. Verdonik’s clocking of 19:16.3 also helped Ted Miller’s squad get headed in the right direction toward a team title.

“Very muddy,” Verdonik said of the conditions. “It was great because we’ve been having so many meets where it’s been 80 to 90 degrees. It was nice to have a little bit of a break from that.

“I love running in the mud, love it. It’s my favorite time of year.”

By the time the field had finished its first trip through the wooded section, Verdonik had 2012 champion Lizzie Manickas of Neshannock shadowing her. At the base of Kite Hill on the second loop, Verdonik had opened a lead of about two seconds.

With a second trip up and down now behind them, the North East senior had a few seconds extra seconds of cushion over Manickas, who cracked into the 19s for the first time in the 2012 race. Entering the flag rope-lined final straight, Verdonik appeared to be headed to a comfortable margin of victory, but Manickas closed with a rush as the leader struggled home with stomach issues. 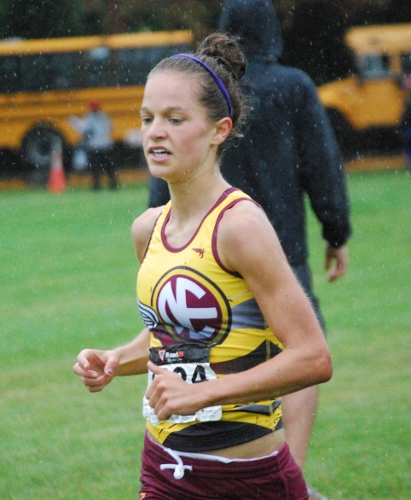 “I felt good the first mile, but after that I just felt very sick,” the winner said. “After the race I had a hard time standing up, but she put up a really good fight nonetheless. I was honored that I could run by her. She did a really good job today.

A year ago, a bulging disc curtailed Verdonik’s cross country season and resulted in her skipping the 2013 track season. Miller noted that his No. 1 runner’s current training regimen includes “lots of swimming” to help keep her back problems at bay.

“That gal came up on her,” Miller said of the final push by Manickas, who finished just seven-tenths of a second back. “Any former runner will tell you that the most vulnerable spot in the meet is to be ahead because everybody else can see you. A lot of runners just run to do it that way.

“(Emma) pressed it. If you want to beat me, catch me. She handled it well, she competed.”

“I am very pleased, everybody seemed to come together,” Miller said of his girls’ team. “They’re a young group that I guess can be called hungry.

“They had great success at the middle school level. They have doubled their distance pretty much, and we’re really proud of them. They’re not all on the same page, but once they do get there, I think we might have some chances to do some nice things before the end of the year.”

Flash Summary by Phil Grove: Emma Verdonik of North East and Jeremy Parsons of Maplewood overcame rain and plenty of mud to win individual titles at Buhl Park. Taking advantage of the best conditions of the day, Verdonik was the pacesetter in the opening varsity race, holding off 2012 champion Lizzie Manickas of Neshannock by seven-tenths of a second, 19:16.3 to 19:17.0.

North East teammates Kate McIntosh finished fourth and Joelle Klein was 10th, lifting the Grape Pickers to the team title with 94 points. General McLane was next with 155, and Laurel was third with 188.

Parsons pulled away from a three-way battle at the two-mile mark, crossing the line in 16:35.9. North East’s Gary Olson was the runner-up at 16:43.6, while Aaron Benka of Grove City was third in 16:51 as the Eagles also added an eighth from Ryan Budnik to finish with 107 points. Pittsburgh Central Catholic was next at 184, while Moon Area was next at 250.