Photos by Kyle Brazeil
Now that's what I'm talkin' about! 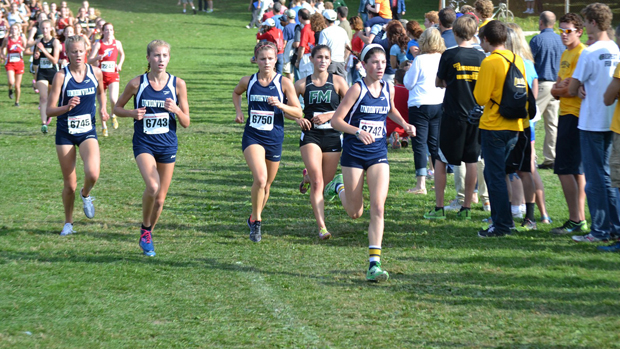 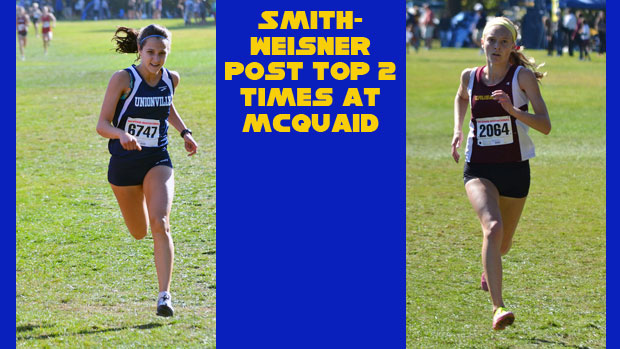 PA#1 Unionville beat 7-time NXN champions Fayetteville-Manlius 45-79 in the featured, seeded race, putting five ahead of FM's four, and eight ahead of FM's five. Unionville head coach Mark Lacianca told PennTrackXC that they went to the meet to "prove that we belong." Continuing, Lancianca said that the girls had been nervous the night before, but that the team talked about taking advantage of opportunities. "The girls followed the race plan to perfection," he continued. "Courtney (Smith) was about 7th at the mile in 5:31, and at two miles, and then finished alone in 16:46.2, the fastest time on the day and just a second off Weisner's course record from last year. 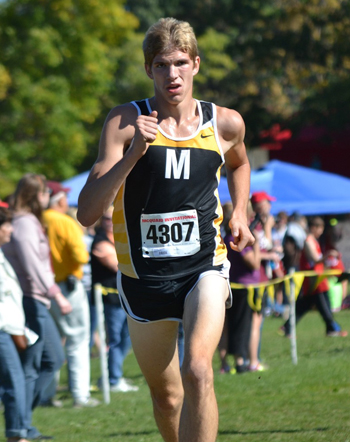 the Unionville plan, which is to run your pace and push the last part of the race. "Around the mile I caught the lead pack. By a mile-and-a-half, I had worked my way up to second, and I took the lead a little before the two mile (11:11)."

In an earlier race, Elk County Catholic's Kennedy Weisner posted a solo effort of 16:54.6. "It's a shame Kennedy and Courtney did not run in the same race," Lacianca said.

Maplewood's Jeremy Parsons won the Boys Varsity A Race in 15:19.5.

(Right in photo by Kyle Brazeil)

In other PA results...District 10 Villa Maria Academy girls were boosted to a 4th place finish in the seeded A race with a score of 175 points with a solid 40 second spread. Claire Brown ran 19:07 to finish 24th. Their 2nd seven ran the Unseeded A-3 race and earned a runner up team finish with 149 points. Amy Messina ran 19:52 to finish 13th overall. North East finished 1 point behind Villa Maria in the seeded A race to earn 5th with 175 points. Emma Verdonik finished 5th overall in the race with a time of 18:09. Montrose had four in the top 25 to finish 2nd in the Unseeded A-2 race with 111 points. Allison Lewis ran 19:22 to finish 9th overall. Oakland Catholic finished 4th in the unseeded AA race with 168 points. Lauren Finikiotis finished 12th overall with a time of 19:04.

For the boys, Northeast Bradford continued their successful season with a 2nd place finish in the seeded A race, scoring 96 points to only trail team champions East Aurora by 12 points. The top five finished 56 seconds apart and were led by the 9-10 finish of Brandon Devonshire (15:59) and Levi Upham (16:00). North East finished 8th in the same race with 208 points. Gary Olson ran 15:48 to finish 4th overall. Northern Potter boys joined Unionville girls as team champions, taking the unseeded A-3 race with a score of 100 points with four scorers in the top 25 overall. Ethan Kibbe finished 8th in 16:21 for the team champions. Gabe Trimbur of Coudersport finished 2nd in the same race with a time of 15:58.