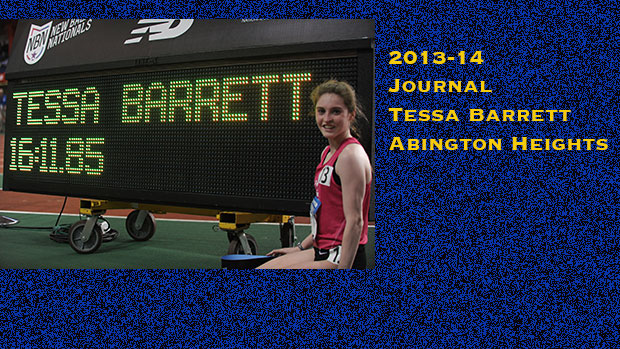 After the Millrose Games, I was really happy with my new Mile PR. It meant so much to finally break 4:50; my best 1600 before that was a 4:52 in a dual meet. As any track and field athlete knows, getting a new PR is an amazing feeling. With states coming up in two weeks, I started practicing longer intervals to get ready for the 3k; 900s on the indoor track and 1000s in parking lots/roads. The polar vortex covering the Northeast still lingered, unfortunately, and the cold weather was really starting to get annoying. I really hate the treadmill, so I tried to bundle up and run outside most days. In between Millrose and States, my coach organized a Last Chance meet at Baptist Bible College. It was a nice meet and went really well. My teammates and I ran the DMR and qualified for States! I was excited to be able to share the experience of States with my team again.

The following Friday, we headed down to Penn State for States. When we arrived, I was almost giddy. State College is going to be new my home in just a couple of months! I love everything about Penn State; the school, the people, the athletics, just everything there excites me! I know I made the right choice J  I was a little bummed that I didn’t get the chance to see my future coaches and teammates, but they were out at the SPIRE Institute killing it at Big 10s! The women’s team won, and a huge shout out to Tori Gerlach, who won the 3k!

I did a short run around campus before meeting back up with my team. We drove around everywhere trying to find a place to eat before we landed at a Wegman’s Café, which actually turned out really well because some of us have food allergies and this way we could all buy what we wanted. After dinner, we headed back to the hotel and our coach gave us a motivational pep talk before giving us our bibs. I was pretty tired at this point, even though it was only 8, so I headed back to my room to do some homework before I went to sleep. The next morning, I woke up at 6 to do a shake-out. I came back in, and I was surprised to see the whole Milesplit team in the breakfast area! It turned out that everyone from Milesplit and Unionville’s team were staying at our same hotel! After breakfast, we headed up to the Ashenfelter Center. I absolutely love Penn State’s indoor track and I was so excited to get to race on it again! After watching some stellar track and field performances (including Brianna Schwartz’s incredible mile!), the time had come for the 3k. I really wanted to get in the low 9:30s, so I was aiming for 38s. I came up a little bit short, running 9:36, but I was still happy with how I ran. After the 3k was done, I had to run the anchor leg in our DMR. We were hoping for a top eight finish, but it just wasn’t in the cards that day.

My indoor season wasn’t quite over yet, I still had nationals in two weeks. The day after States, I continued with my training regimen and set my sights toward performing well at NBNI.