Unionville senior Courtney Smith entered her third year of XC with a resume that has been growing season-to-season. As a sophomore, she was 4th in AAA at Hershey. Then last year, she won her first state title, setting a meet and course record. In the winter, she broke the state record in the 3000 meter run, but had to settle for 2nd place. She more than made up for it by twice outsprinting the same competitor, first for 3rd place in the Girls 3000 Invitational at the Penn Relays, and then in the finals of the AAA 3200 meter run at the PIAA State Championships. Smith led her team to a qualifying spot and trip to NXN after winning the Northeast Regional. But in the first 1000 meters in Portland, she fell and was spiked. She recovered for 10th. Then during indoor, and despite an injury, Smith captured 3rd in an incredible 3000 at PTFCA Indoor States, and anchored her DMR to a state title. Two weeks later, she anchored that DMR to a 6th place finish in the New Balance Nationals Indoor champs in a time ten seconds better than their state title... and anchored the 4xmile the next day to a 3rd place finish - both earning all-American recognition. But the injury endured. She went through PT, and returned to racing at the Henderson Invitational on May 2nd. Beyond happy to be back. 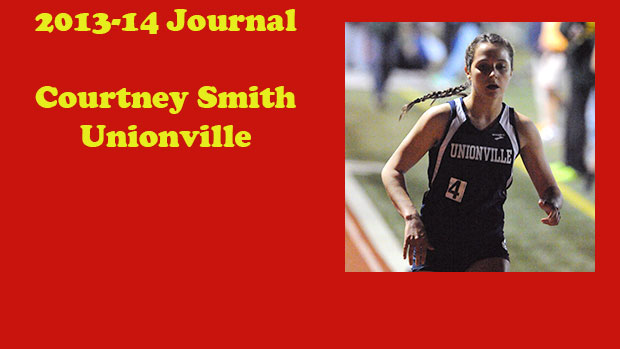 The first few weeks of my recovery were difficult because I was no longer running, but still in pain.  Normally exercise is my release for stress, so when it became the cause of my problems, I found myself at a loss.  Once I found a physical therapist that I really liked and trusted, it gave me hope that my high school running career wasn't over.  For the first few weeks of physical therapy I still had no projected date of return, but I found some comfort in being allowed to exercise again.  Twice a week for two weeks I ran on an Alter G, a miracle machine where you can run when injured at a percentage of your body weight.  Compared to the hours of exercise I normally did a day with my team, 30-60 minutes a few times a week didn't really feel like much but it was better than nothing.  I still couldn't cross train "on land" but I started swimming and eventually added aqua jogging.

By the third week of physical therapy, I started feeling a little better and was allowed to increase my "running" on the Alter G to 4 times and continue swimming a little. Every Alter G session felt easier and easier as I got back into shape and by the end of the week I ended my run with my first 5 minute mile on the Alter G.

The next week I was finally cleared to run easy outside and could finally be back with my team.  The way it timed out of course, was that week was our school's spring break so we didn't really have organized practice, but I was still thrilled just to be outside.  After being forced onto the treadmill all this winter, it seemed like a cruel joke to be relegated to it again for a few weeks while the spring weather outside was perfect.  I ran a few times outside, but did my hard workouts of the week on the Alter G and cross training.  My first run outside was a distance run and I felt so slow and heavy.  I didn't even want to look at my watch since I was running on the track.


However, I gave into the curiosity and checked my time at the mile and it was 6:15!  I guess compared to the pace and weight I was running on the Alter G it was slow and heavy, but I wasn't as out of shape as I thought.

The following week was my first practice back with my team in almost 7 weeks!  It was a modified workout and no where near as fast as I did it junior year, but I was happy just be back.  I was allowed to cross train for the full amount with my team after practice and finally felt like I was part of the team again.  Thursday was Penn Relays and PA did so well as always!  I was really excited to watch all the PA distance races and they didn't disappoint!  It was also nice talking to my future coach and teammates and watch them break a few Harvard distance school records!  Friday I did my best workout thus far on the Alter G.  The 5 minute mile that felt really hard a few weeks before now was my comfortably hard pace for multiple miles at a higher percent of my body weight.  After the workout I felt exhausted for the first time in weeks, and I was also happy that I was clearly getting faster each time I ran.

The next Monday the middle school track kids had a meet so we couldn't get on the track, and Wednesday was suppose to be torrential downpour so we were limited to one workout before Friday.  We did cruise intervals and it was my first all-out practice back.  It wasn't full cruise intervals but I started with Olivia and tried to stay with her as long as possible, which ended up being everyone except the last repeat.  On Wednesday I did a similar workout on the Alter G that I did the hard day last Friday, only it didn't feel nearly as hard. Thursday was my birthday and also a day off from school because we have a river that runs through our district and when it overflows some students and teachers including me can't get to school.  Most of the girls on the team live on the other side of the river so I had to aqua jog alone, but after weeks of being alone, one time didn't seem that bad. 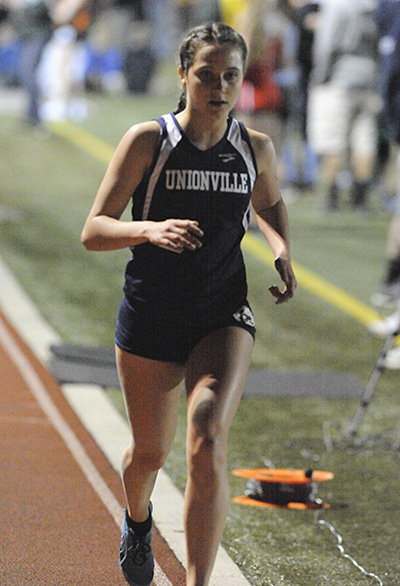 Finally race day came on Friday!  I hadn't worn my Unionville uniform in two months, and I was so excited just to see where I was at.  My goal was to stick with Olivia as long as possible and I ended up finishing within 0.2 seconds!  In retrospect the race actually felt pretty good and I wasn't sore or tired at all the next day!  I season PRed in the 800 and the mile as well considering it was the first fast running I had done on ground in months.  It is a little frustrating to think about how far behind I am from last year and where I would be if hadn't got hurt and had continued improving, but for now I'm just trying to focus on enjoying my last few weeks of high school running and getting better and better every time I run!

Thank you to Mr. Rudawsky and Matt Higley my physical therapists at Elite PT!  Also, Tessa Barrett and family, I'm sorry for your loss, you are in our thoughts and prayers.