Elk County Catholic senior Kennedy Weisner enters her final year of XC with a champion's resume. As a junior when she won her first state cross country title - this one in the inaugural Class A Championship. Weisner also qualified for her first Foot Locker Nationals. During indoor, she was invited to her first Millrose Mile, and also to the Brooks PR meet, an elite gathering in the Northwest. She came back in outdoor to capture two state AA titles, winning the 800 and the 1600 - a very tough double. She began her final XC season at PTXC-5, setting a course record of 17:49. An injury hurt her chance to repeat in Class A in XC, and sidelined her until December. She won the Millrose Trials Mile and finished 2nd in the Millrose Games. This was her third year qualifying for the Penn Relaya Carnival Mile - taking 5th as a sophomore, 3rd as a junior and 3rd as a senior. She went on to PR in the 800 at the Loucks Game, taking 3rd... and repeated the 800-1600 double wins in PIAA States in AA. 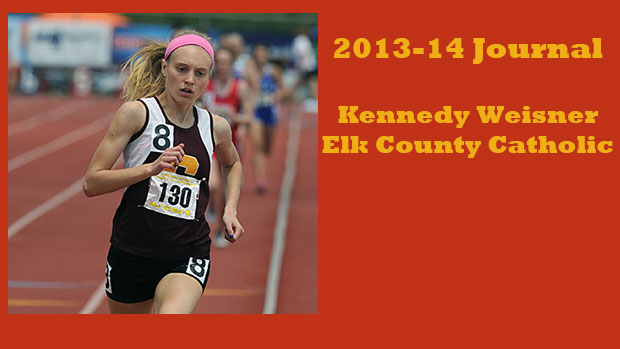 Hey everyone! It’s time for the dreaded last journal :)

The week following states was tough training wise, mainly because I was so exhausted from states, graduation, and all of the extra family members hanging around. At the end of the week, though, I learned that I was invited to run the Dream Mile at the Adidas Grand Prix in NYC on June 14th. I was elated!!

My mom and I flew out of Dubois, which is a regional airport about 40 minutes from my house, the Thursday afternoon before the race. It’s just a small airport that’s basically one room, and it only flies to Cleveland. This seemed a bit counterproductive since Cleveland and NYC are in opposite directions, but theoretically it was still quicker than driving.

There were only three of us on the plane to Cleveland, and they asked us to sit behind the wings in order to balance the weight. I found this to be a little sketchy, and with the addition of some major turbulence, I was overjoyed when we finally landed about 40 minutes later.

When we entered the Cleveland airport, we saw that our connecting flight was delayed. It was originally supposed to leave at 3:30, but there was an air traffic control delay, and the flight kept being pushed back until it was scheduled to leave at 8:30. We explored the airport, but there wasn’t much going on. At about 5:10 my mom and I went on a little walk. Every time we passed one of the screens that shows all of the flights I would check it because with the air traffic control delay they can move the take off time up or back at any time. One of these screens showed our flight time to be at 5, and by this time it was 5:30. We were really confused so we started running back to the terminal only to find that the flight was still scheduled to depart at 8:30. Then the time was moved even further back to 8:50. All of the other flights to LaGuardia that day had been cancelled, and we started to worry that our flight would be, too. My dad assured us that if that happened he would come pick us up and drive us to New York himself… I don’t think he really thought that one through. Speaking of driving, it would have been sooooooooooooooooooooooo much quicker! haha

Finally, at just about quarter after 7 we received the good news that the flight would be moved to 7:30 and we took off just before 8. The flight took a little longer than expected due to inclement weather but a little bit after 9 we finally made it! Flying over NYC at night is preeeetttty cool especially with all of the lights!

I took my first taxi ride from the airport to the Grand Hyatt Hotel at Grand Central Station. It was quite the experience to say the least. The driver was swerving in and out of traffic constantly, all the while talking on his cellphone. He turned around at one point and asked us if he was going too fast!

When we arrived at the hotel (in one piece surprisingly) we met Coach Green and Coach Webb and checked in. I received a backpack that was absolutely filled with clothes. It was awesome! It was around midnight by the time I finally was able to go to bed, and the beds were heavenly. 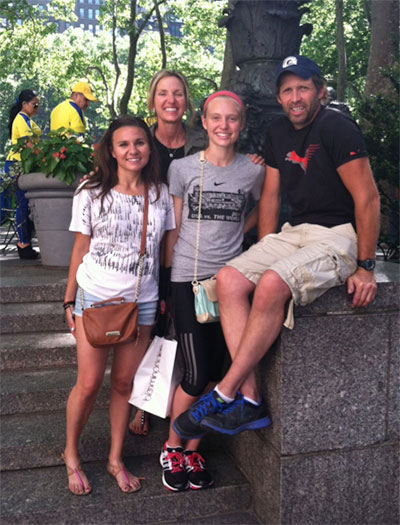 On Friday morning we had a meeting, which was our sole obligation all weekend besides showing up to race. The dream mile is a lot different than meets like Footlocker and Brooks PR. They treat all of the high school athletes like they are professionals. We were free to do whatever we wanted/needed to do whenever we wanted to do it. There was no time schedule that we had to abide to. This was nice because we all live in different parts of the country so we could do what we felt comfortable with. Buses ran between the hotel and Icahn Stadium between 11 am and 9 pm in Friday, so we could go over to the track at any time we wanted to. My mom and I decided to go early, so we took the 11 am bus. Riding on the bus was cool because we were quite literally surrounded by professional athletes. There were so many international and American athletes and it was funny because some of them look so much different in person. I didn't recognize half of them, but I finally realized that we were sitting behind Kim Conley.

The track was absolutely fantastic. I did a short run and some strides, and then stretched until the bus came. When we made it back to the hotel, we had lunch from a delicious market and then walked around the city a little bit.

For dinner we went to this awesome little place called the House of Lasagna. It was delicious and not too far from the hotel. It actually seemed farther on the way there because it was raining, but on the way back it seriously only took us about 2 minutes to walk the distance.

The next day was race day! Before the race we were over in the warm up area, which was so cool because you saw everyone from the professional athletes to the youth runners warming up. At first, the time seemed to go slowly, but all of a sudden it was time to warm up and then race. 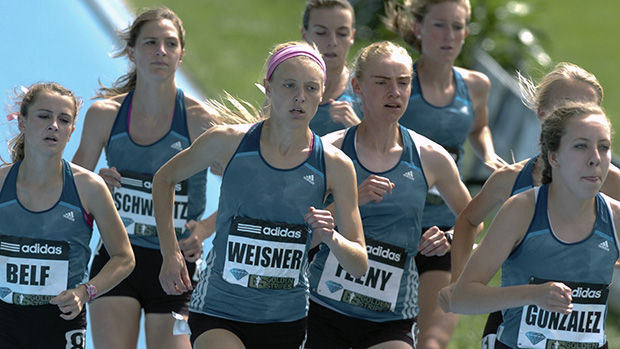 Looking back on the race, there were definitely parts of it that could have gone better. I ran the first lap in about 72, which was fine, but as I was moving up I was shoved from behind and tripped into another girl. I think all three of us kind of stumbled, but luckily none of us fell. After that, I was running in second for a while, but I just couldn’t really find a rhythm. I ended up in sixth place in 4:46, which is actually my outdoor mile pr and just a second off of my indoor pr. For being a not so great day, it was still pretty solid, so I can’t be too disappointed. When I was talking to Coach Green later that night he said that when you’re in a quality field like that one and you can come away with a pr or close to it, that’s a good sign. So it wasn’t quite how I wanted the race to turn out, but it was still a really good experience that I can take a lot away from and apply to future races.

After the race I was able to watch the rest of the meet, and there were some amazing performances. I was really excited to watch David Rudisha, the Olympic 800 meter champion race, and he cruised to a victory. The high jump was by far the most incredible event that day, though. Two of the competitors cleared the highest height that has ever been cleared on American soil, and both took jumps at the world record height. It was absolutely incredible to watch. The way they so effortlessly flipped over the bar was mind blowing.

For dinner we walked to a restaurant that we had heard about, and when we got there it was closed down. We were starving, and we somehow got lost on our way back towards the hotel… but like I said, we were hungry… Our problem was that we really didn’t know what we wanted to eat, so eventually we ended up back at the hotel. The concierge recommended a place called Davio’s. It was delicious. Someday, I will go back to NYC for the sole purpose of eating at Davio’s again.

On Sunday morning, there was a street fair right next to the hotel, and as my mom and I were looking around, I was scared out of my mind by Coach Green. He came out of nowhere and started to say something to me, but I was so startled that I thought he was about to rob me or something. Before we left the city, we purchased the most divine cake I have ever eaten from Magnolia Bakery. Instead of flying home, we decided to drive home with my dad and my sister who had come up in time for the race. It was Father’s Day, after all, and with how our luck was going, chances are driving was quicker than flying!

So with that last race, my time as a high schooler has officially come to an end, which is crazy because it seems like it was just yesterday that I was a little freshman running my first cross country meet.

I cannot wait to move on to college, but I will definitely miss the amazing people that I’ve met through cross country and track these past four years. I just want to thank everyone who has supported me, especially my parents because I truly wouldn’t be where I am today without them. I’d also like to thank Don Rich and everyone else at PennTrack for the fantastic coverage they provide for Pennsylvania and also for giving me the opportunity to write this journal. I hope you have enjoyed reading it as much as I have enjoyed writing it!

Since this is my last journal, I thought I would include a picture from my first ever race, which was just over 8 years ago! It’s hard to believe that it has been that long. Shout out to the man in the picture, Ben Zappa (he was about 65 at the time), who out-kicked me at the end and instilled in me my competitive drive. 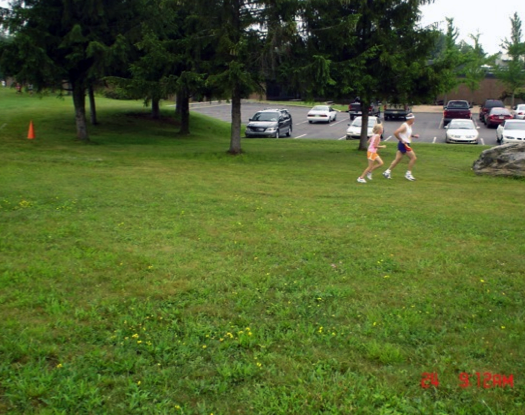