The high jump will be one of the hot events to watch after the sprint events in the infield are completed, as the title will be up for grabs.

Erkia Voyzey of Tyrone Area is one of the front runners for the championship in what has been a steady season for the junior. Voyzey has competed in four meets this season, winning all four of them, and clearing the same 5-8 height at the Penn State facility each time. With that record, clearing it a 5 th time seems like a great possibility. Doing that would give her a great chance to win the title. 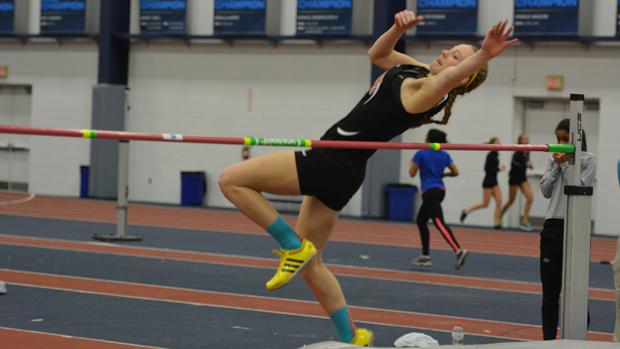 But unlike the first four meets, Cyre Virgo of Fleetwood will be in the building to compete in the state meet for the first time in 2 years. In her last state meet appearance, she cleared 5-10 to win the title and had a good go at 6 feet. She went on to win the national title in the high jump in 2013. Even though she missed the state meet last year, she still finished 2 nd in the New Balance Indoor Nationals high jump. This season, she has cleared 5-8 in her one and only appearance. Virgo also has only one loss in a PA meet indoors or outdoors since the 2012 District 3 championships, and that was a silver medal at the Penn Relays in 2014.

Abby Jones of Franklin Area will contest her first indoor state championships after a successful first indoor season. In three competitions, Jones has won all three, clearing 5-6 twice, and a 5-7 once. Jones is also a three time AAA outdoor silver medalist, losing to Virgo twice. Jones has only missed out on victory six times in 27 career appearances. 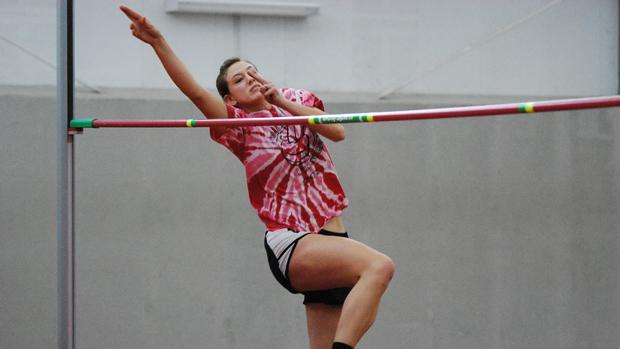 When the bar gets high and these three go head to head to crown a champion, it should be an instant classic. Will the mystique of Virgo haunt Voyzey and Jones, or will the two of them be able to give Virgo a first in state defeat outside of the Penn Relays in nearly 3 years?


Another event that will have an epic battle at the top will be the girls shot put, in a match up that has been two years in the making.

In 2013, Emily Stauffer of Cocalico become the indoor state champion as a 9 th grader with a mark of 43-6.75. She went undefeated all the way to the outdoor state final where she finished 2 nd. Last season, her season started well until she suffered an injury, requiring surgery. Despite trying to throw with her opposite arm, the season did not go as well as she would have hoped. No state meet appearances was the result of her struggles. Now healthy and back in form, Stauffer has won 7 of her 10 appearances, including a win over the 2014 champion Courtney McCartney of Selinsgrove. Stauffer has also thrown 47-10, a lifetime best. 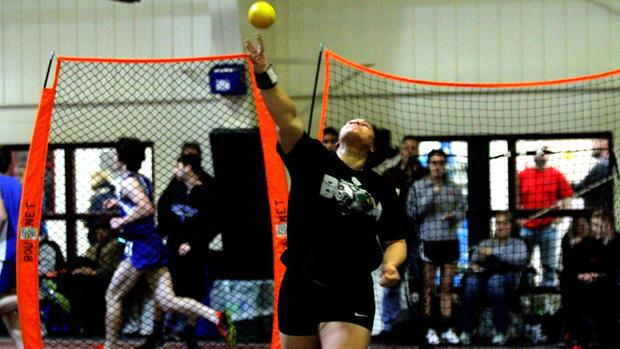 But the reigning champion has been able to slow down the momentum of the returning Stauffer with two victories against her, including a win this past Thursday at State College. McCartney has also had a lighter schedule than Stauffer, competing only three times and throwing 46 feet on more each time. Compare that to the 10 appearances for Stauffer, when she only has thrown over 46 feet twice.

Should one of those two have an off day, Jocelen Ruth of Kutztown Area is the most equipped thrower in the chase pack that has a chance to pull off an upset. Ruth has a seasonal best of 45-4 and has won six of her nine appearances this season. A big throw will be needed to pull off a shock victory, but she has the pedigree to pull it off. Elena Marchand of Hickory has a 45-1 seasonal best and is currently on a three meet winning streak.

It should be a classic encounter for the top two, especially if they both hit their best form on Sunday. The winner will be a two time champion, and they will have to earn it with all six throws. Keep your eyes on this event fans!


When it comes to the girls long jump competition, it is a little bit of a mess at the moment. The event does not have a clear favorite, but it has a number of athletes who are talented enough to win the gold medal should they have a good day on Sunday.

Before the turn of the year, Aspen Gaita of Stroudsburg was the top long jumper, beating out top competition in Katy Alberici of Susquehanna Township and Arianna Przybylowski of Pennridge. Her mark of 18-4.50 still sits on top of the state list, but a 3 rd place finish at the PTFCA Carnival puts her state title hopes in jeopardy.

Alberici was the winner at the Carnival with an 18-3 performance, just a half inch off of her 18-3.50 mark that lost to Gaita in December. Alberici struggled when she went to the Kevin Dare Invite at Penn State, finishing 9 th. So she will need to overcome the Penn State runways in order to put herself in contention for the gold medal.

Przybylowski has the most state meet experience in the group. She finished 3 rd at this meet a year ago and she was 4th outdoors last season. Her recent form will also give her encouragement to finally snag a gold medal. She has broken the 18 foot mark in three of her last four appearances, but none of them came in victory. She will hope that another 18 foot plus mark will be good enough to make her the champion for the first time. 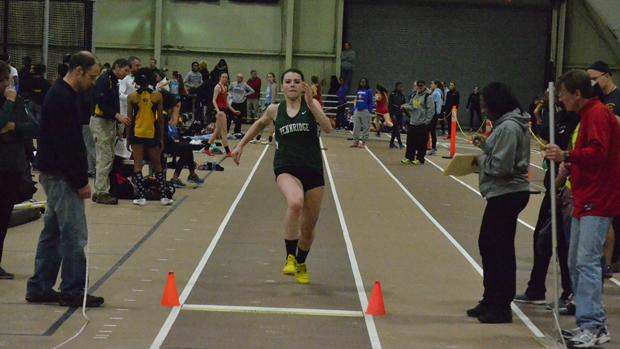 In the past month, Alison Jones of Archbishop Ryan has emerged into the state title picture very quickly. In the past three weeks, Jones has gone from 17-2 to 17-2.75 to 18-2 and a DVGTCA Meet of Champs win. But Jones has never competed at a state meet in any season and will hope her strong push to the top has one more surge left in it.

The pack of jumpers under two inches from the 18 foot mark can't be ignored in the one event where truly anything can happen. Aghina Marshall of Methacton is finding her best form at the right time after her 17-11.75 at the DVGTCA Meet of Champs on Friday. Freshman Madison Langley-Walker of Cheltenham is having a solid first season, and despite her first year status, may need to pull a big jump off to help her teammates in their team title defense. Veronika Karpenko of State College nearly hit 18 feet at the Kevin Dare meet last month, while Christopher Dock's Bailey Kratz jumped 17-10.25 way back in December.

So many jumpers have a chance to win the long jump. It will come down to the final jump to determine the champion.


In the triple jump, the champion Uchechi Onuonha of Pennsbury will have to contend with the difficulty of defending the championship and the momentum of the new state leader.

Onuonha has been on a good roll in the past month, starting in late January with a then state leading 38-4.25 at Lawrenceville. She has also earned a win in the DVGTCA Meet of Champions with a mark of 37-10.25. 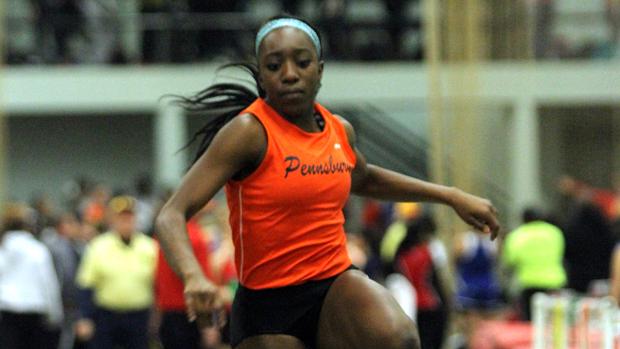 Onuonha is in position for a strong defense of her title. However, 24 hours before her Meet of Champs win, Sierra Brabham-Lawrence of Harrisburg took over the top spot in the event with a mark of 38-5.25 at State College. It was her only triple jump appearance in her indoor career, but her outdoor season last year would suggest that she is a dangerous threat to Onuoha's title. Last spring, Brabham-Lawrence cleared at least 38 feet in all six of her appearances. Her lack of competition this season due to injury may play a factor in her being able to take on 6 jumps after running three rounds of hurdles, but if she gets one big mark, she will be tough to beat.

Shannon Taub of Council Rock South has had a very successful season in the triple jump, which included a run at the top of the state when she jumped 37-4.50 in early January. She has improved that mark of 37-11, but that was in a defeat to Onuoha. Taub has two 37 foot plus jumps in four appearances, but has yet to defeat the state champion. She will be going back and forth between the high jump and triple jump during the meet, so her fitness will have to be on point for her to contend for gold.


The pole vault has not had a state meet favorite for the entire season, as consistency has been difficult to find. There are a number of vaulters who will enter Sunday's state meet believing they have a chance to win the title.

Tesia Kempski of Bishop McDevitt and Erin Winters of Lebanon are the only 12 foot vaulters in the state this season. Kempski achieved the mark on the opening day of the season, and despite not reaching again, she has cleared 11 feet or better in 8 of her last ten appearances, including an 11-7 clearance over the weekend. Winters has only competed in three meets this season, and has marks of 11-6, 12 feet, and 11-3.

Kaitlyn Toman of Salisbury is coming off a big win at the PTFCA Carnival where she cleared 11-9, marking her fifth competition in six where she has cleared 11 feet or better. She has only won two of those six competitions, but the recent win should bode well for her confidence.

Megan Fry of State College has been on a good roll in the past month. Despite an 8 th place finish at the Carnival, she has cleared 11 feet in each of her last four appearances, including a season best 11-7 at the State College meet last Thursday. Fry has failed to medal in any state competition, and Sunday will be her best chance to earn her first medal. 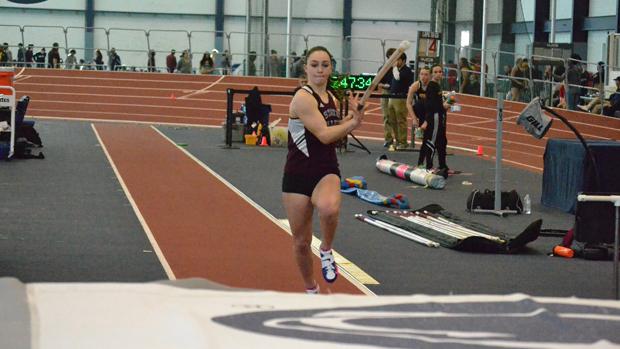 Behind them, the trio of 11-6 vaulters will look to have their day in the sun with their best performance of the season. Lucianne Burner of North Pocono has three 11-6 clearances in her last four appearances, but only winning one of those three. She was 2 nd to Toman at the Carnival with an 11-6 clearance. Kennedy Shank of Northern started her season on a high, clearing 11-3 and 11-5.75 in her first two meets. But after a month plus without competition, she stuttered to a 10-1 clearance on Saturday. She will need to find her top form from January very quickly. Dominique Franco of Council Rock South cleared a season best 11-6 at the DVGTCA Meet of Champions after being stuck at 11-0 and 11-3 for all of January.

The pole vault may be the most unpredictable event of the day in the girls field events. With a pack so close together, consistency will be key in crowning the champion.