The 800 meter run is an unique event at the indoor state meet because being in the seeded heat has not proven to guarantee a gold medal for winning. Last year, Liz McGroarty of Garnet Valley won the state title out of the 2nd of 3 heats. Despite that, you still always aim for a runner in the seeded heat to snag the title, which is where we will start.

On January 17, Sarah Walker of Germantown Friends showed everyone that she can translate her outdoor success into the indoor season. She had finished PA#1 in the 800 in her first two seasons, but that form didn't materialize indoors until that day. Walker pulled away from the field at the Yale Track Classic and ran a then US#1 2:10.52, her fastest indoor 800 by 3 seconds. It sits as her only 800 meter performance of the season, but success at 600 meters a couple of weeks later suggests that she is still in good form. 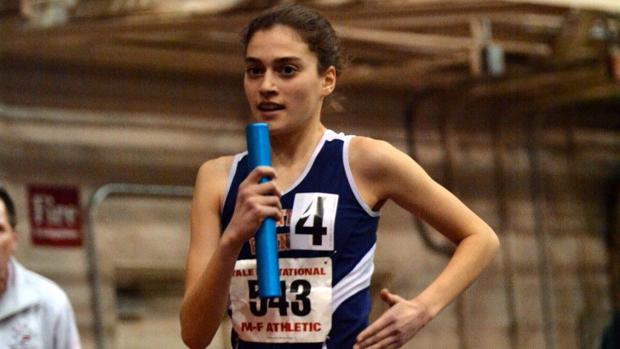 While Walker has stayed away from the 800, Gabrielle Wilkinson of Friends Central has been crushing the distance in the past couple of weeks. The freshman has been showing the ability the AAU circuit has known and appreciated in the past couple of summers. Wilkinson won the 800 meters at the PTFCA Carnival in 2:15.40. Six days later, she competed in the 800 meter run at the DVGTCA Meet of Champions and defeated outdoor champion Maddie Villalba of Central Bucks West to set a new meet record 2:12.23, good for PA#2. In 2008, her sister Elyse finished 2nd at her first indoor state meet behind world champion Chanelle Price. Can Gabby do one place better and win gold?

Villalba enters this meet as the 2014 runner up, but she has already surpassed her best time from that season by 2 seconds. Villalba hasn't finished worse than 2nd in her last five indoor 800s, winning three of them. Villalba will like her chances in the rematch with Wilkinson and her first head to head against Walker this season.

Mikayla Schneider of Notre Dame, Grace Trucilla of Villa Maria, Karli Visconto of Nazareth Academy, and Shannon Quinn of Trinity (3) are potential sleepers for the title. Schneider finished 3rd behind Wilkinson and Villalba last Friday and her 2:13.05 represented a 4 second lifetime best indoors or outdoors. Trucilla has not finished worse than 3rd this season, recording an indoor best 2:14.50 at the SPIRE Showcase. Her 2:10 outdoor personal best suggests that she can mix it up in the front with the rest. Visconto was the outdoor bronze medalist in AAA a year ago, and has run an indoor career best 2:15.44. Quinn ran a 2:14.6 in her only race this season at State College last week and is never afraid of a race.

As for the mile run, the big news is that the fastest indoor miler in state history, Brianna Schwartz of Shaler Area, has opted to not compete at her final indoor state championship meet. This will be the 2nd year in a row in which the champion will not defend her title. The other girl that didn't defend her title will be back this year to try and reclaim it.

Marissa Sheva of Pennridge missed the 2014 state meet due to illness, and was unable to defend her 2013 championship. Her final indoor season got off to a flying start, as she took advantage of her cross country fitness after running the Foot Locker Finals and ran a 4:50.73 mile to win the Bishop Loughlin Games in December. After some time off, Sheva went through some struggles and only recently has she been able to put together a good race, running 5 minutes flat on a distance medley 1600 leg last Friday night. To win the title, she will have to defeat one of the in form runners in the state at the moment. 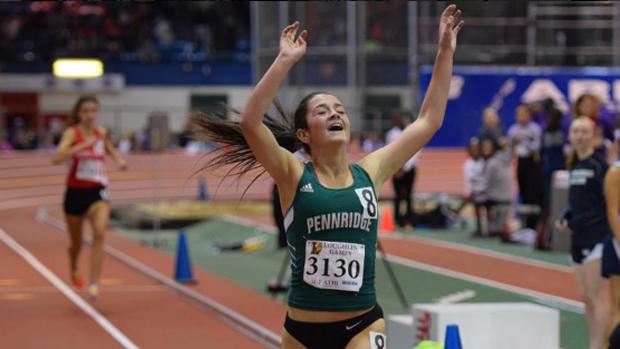 Olivia Sargent of Pennsbury has been on a roll in the past few weeks, winning the New Balance Games mile, finishing 2nd in the Millrose Games Mile in 4:51.02, and running a US#2 3000 meter run on a flat track. She has also led her team's 4x8 into the national top ten. Two of Sargent's three mile performances have been clocked in at 4:55 or faster, and she has not finished worse than 2nd. Her hot streak will be tough to snap on the biggest stage of the season.

Kelsey Potts of Mount Lebanon is the 3rd and final sub 5 minute runner in the field. She achieved that mark over the weekend at the TSTCA Meet of Champions in a runner up finish. Potts has come up big in the big meets during the cross country season, and the junior will hope to continue that trend on Sunday.

A duo have broken 5:10 season and will look to get closer to 5 minutes or below it. Karli Visconto of Nazareth Academy chased a fast mile time all winter long by taking several trips to the Armory in New York to mixed success. Then at Friday's DVGTCA Meet of Champions, she had a breakthrough at the mile distance, running a lifetime best 5:08.01 to earn the victory. Four of her six career mile runs have come this season. How will she manage her 5th mile run of the year?

Claire Brown of Villa Maria ran 5:06.05 for 1600 meters in her last meet at the SPIRE Showcase, after hovering around the low 5:10s for most of the winter. Brown is also a 2:12 800 meter runner, which gives her a boost when the race gets tough.

The girls 3000 meter run will have the trio of girls who have spent a good portion of the season as the top three 3000 meter runners in the entire country!

The first girl to join that list was Mady Clahane of Cumberland Valley. After running alongside Marissa Sheva of Pennridge for 12 laps at the Kevin Dare Invite, she put on a big move and pulled away from Sheva in the final 600 meters to run a then US#1 9:59.40. Seven days later, Madeleine Davison of North Allegheny made an emphatic 2015 season debut at the 2nd TSTCA meet, running a then US#1 9:54.14 by herself. Six nights later, Olivia Sargent ran a solo 9:59.22 at the final DVGTCA meet of the regular season to run a then US#2. 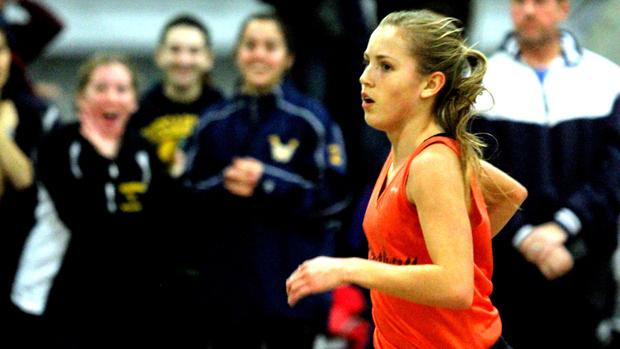 The chase pack behind this elite trio is one of the deepest packs we've seen in any state meet. The remainder of the field are all placed inside the US top 65!

Maggie Toczko of Tunkhannock went to the PTFCA Carnival and surprised everybody with the 4th best time in the state, 10:14.14, her best time by over 20 seconds and an improvement of nearly 40 seconds in 12 months! Lauren Gronbeck of Eden Christian Academy is coming off a big runner up finish at the TSTCA Meet of Champs, running her 2nd straight sub 10:20 performance. Olivia Young of Unionville ran her 3000 10 days after the Nike Cross Nationals race and hasn't run the event since. Hannah Molloy of Pennsbury set a personal best at the Carnival and is a returning medalist. Freshman Brooke Hutton of Coatesville will make her state meet debut, and if her top ten cross country state finish in any indication, she will be ready to run on the big stage.

Now we move on to the relays, with each relay having a different layout from the other.

The 4x800 meter relay has a runaway favorite in Pennsbury, The Falcons are the only team to break 9:20 this season, running 9:18.88 at the Armory Track Invitational on January 31. No other team in the field has run under 9:30. But Pennsbury's top team includes Olivia Sargent, who will contest the mile and 3000 prior to the 4x8. An alternate leg or a tired Sargent may keep the rest of the field in it. 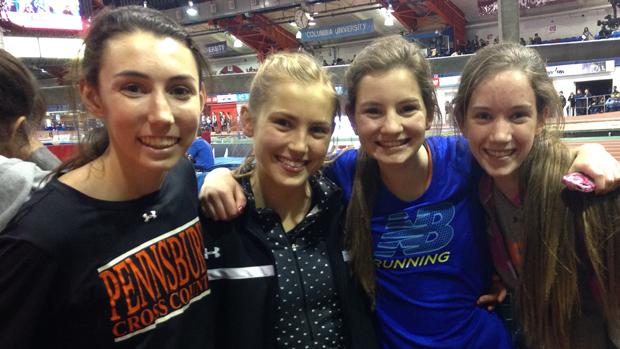 That field includes the 2014 silver medalists Great Valley, who bring a group with a lot of experience from the previous two seasons. Elise Claffey, Crosby Spiess, Tabitha Wismer, and Anna Willig came on the narrow losing end of those epic 4x8 state races a year ago. Perhaps this can be the time they get the gold medal they've been longing for. Their best this season is 9:34.46.

The remaining sub 9:40 teams include North Penn, Harriton, and Central Bucks East. Harriton will be considered the wild card for a top place, but they do have some good pieces that can put a strong race together. They will be led by Maura Henderson, a 5:10 miler. North Penn will be led their top two cross country runners, Ali Valenti and Phoebe Clowser, who have been the relay specialists this season. Central Bucks East will have Lizzie Morris leading their charges. The senior has been excellent at all distances this season and has been victorious on four occasions this season.

On the other hand, the distance medley relay will be a tougher race to call, as many of the top teams are cluttered together.

The latest favorite to emerge in the distance medley is Friends Central. Their 12:20.29 victory at the DVGTCA Meet of Champions was led by a 3:35 1200 meter leadoff leg by Gabrielle Wilkinson. The anchor, Emily Burd, is a consistent 5:10 miler, which gives them one of the strongest combinations in the meet.

Germantown Friends will have the combination of Sarah Walker and Brigid Anderson to lead the way. Walker has been unstoppable lately, earning big wins at Yale and The Armory Track Invitational. The potential of seeing Wilkinson and Walker match up in one of these legs will be a can't miss portion of the meet.

Cardinal O'Hara got a late start to their season after their postseason cross country exploits, but the team has found its form and they have a lot of depth to choose from for this race. A combination of the Mancini sisters Grace, Liz, and Eleanor, Olivia Arizin, and Sarah Hayes can be used in this relay.

Villa Maria Academy will also contest the DMR, with the trio of Claire Brown, Grace Trucilla, and Alison Carson leading the way. Unionville will have a strong team, with Olivia Young, Kacie Breeding, and Anna Juul toeing the line. 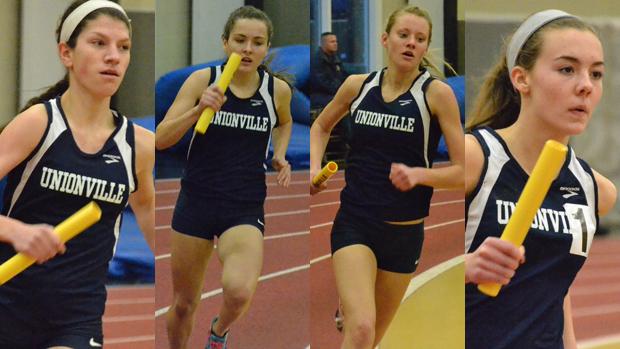