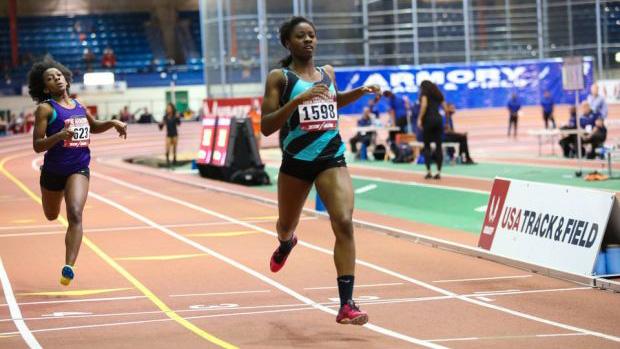 So many of the state's top athletes and teams journeyed to The Armory for one of the biggest "invite-only" meets. The performances, as you could expect for this time of the year, were well-worth the trip.

Jaxson Hoey started things off nicely for the state of PA on Friday night. Hoey found himself on the line in a stacked field in the 1000 meters. He ended up fourth in a time of 2:28.31. The top three were only separated by .11. That's the third fastest time we have on record for the distance, putting Hoey behind just Paul Vandergirft (1984) and Sam Ritz (2015). [Correction: Wissahickon's Ken Lowry ran a 2:26.32 in 1982 on the boards of the Brendan Byrne Arena in NYC for the national record at the time, making Hoey's time the fourth fastest PA time we know of]

Saturday was a much bigger day at the races.

In the boys 300 meters, Josh McLemore was just off his own PA#1 in the event. He placed third in 34.40, .08 off his time from the Bishop Loughlin Games in December. 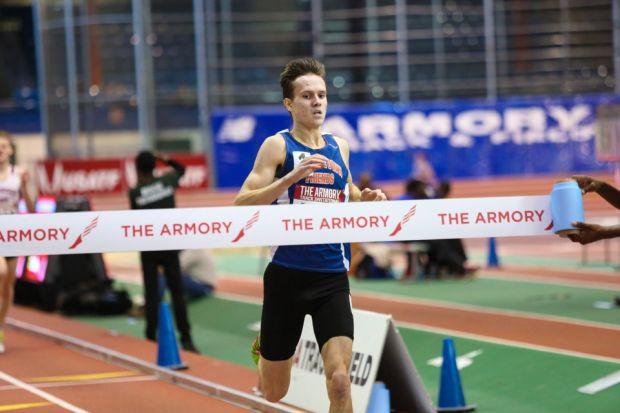 Finally, we have a sub-8 4x800 in PA! Germantown Friends' became the winter's first team to dip under eight minutes in the relay, finishing fourth in a very fast race. The Tigers take over as the new PA#1, beating previous PA#1 Abington in the race. The anchor leg, Grayson Hepp, split a 1:55.53 in the state-leading effort. Penn Wood was sixth in the race in a PA#3 of 8:02.32. Abington was tenth in 8:09. The 4x8 talked with MileSpilt after their race:

GFS' Nick Dahl certainly made his trip worth it. In addition to the PA#1 4x800, Dahl won an automatic bid into the Millrose Mile! Dahl ran a PA#7 for a sizable win. Dahl joins Jaxson Hoey as PAs definite qualifiers in the prestigious race.

There's not a whole lot stopping Dasia Pressley this season. The Pennsbury senior kept up her stellar season with another big win, claiming the fast heat of the 300 meters and a new US#1! Pressley clocked a 38.20. Pressley will now dedicate her focus to the 200 meters and 60 dash as she has her sights set on a double gold at states. Watch Pressley's post-race interview below:

Olivia Arizin has been on fire this indoor season. Arizin kept up her big indoor season with a second place finish in the girls' mile, losing to the very formidable opponent, Jessica Lawson from New York. Arizin's time of 4:57.88 is a PA#5. Olivia Sargent of Pennsbury was fifth in 5:03.35 and Germantown Academy's Maggie Hallahan was sixth in 5:11.50.

Sarah Walker of Germantown Friends' was third in the 600, running a 1:31, a new PA#1. She spoke with MileSplit afterwards about her thoughts on her race.

Madison Langley-Walker was PA#1 for a long while in the long jump. She lost that title last week, but it didn't take long for the Cheltenham sophomore to earn it back. Langley-Walker leaped 18-6, an indoor PR that matches her outdoor PR, for the easy win and a new PA#1.

Evelyn Berecz of Downingtown East won the triple jump at 36-8.5, and Neuman Goretti's Janese Lynch won the shot put, with a throw of 43-2.5.

Kouri Peace of Pennridge was unable to best her PR in the 60 meters, but the freshman still walked away with the win, clocking a 7.82. Norristown's Jayana Webb took the win in the 200 meters, winning in 25.87, a solid time for a flat track. In the 60 m hurdles, CB East's Leah Kendrick improved her state standing with a win in a PA#11 9.32.

The 16000 meters proved to be one of the best battles of the night, pitting Mady Clahane of Cumberland Valley against Anna Juul of Unionville. Clahane took the win in a time of 5:06.83, while Juul coming in second in 5:06.91. Unionville's Kacie Breeding won the 3000 meters in a nice time of 10:28, which is good enough for a PA#8.

Nathan Henderson of JP McCaskey returned to the track for the first time since mid-January and he made his presence known. Henderson won the 3000 meters in 8:57.93 and then won the 1600m in 4:33.37, making for one of the best doubles we've seen this indoor season.

In the long jump, Conestoga Valley's Jose Barbon had a massive PR, jumping 22-4.5 for a new PA#2 in the event. His Conestoga Valley teammate Aanyah Bermudez won the 55 meter hurdles in PA#4 7.72, while CV's Andrew Miller was golden in the 55 dash in 6.68.

Cumberland Valley's Kier Miner stayed hot winning the 200 meters in a time of 23.23.

Katie Jones is back in the driver's seat. The South Williamsport vaulter took back the PA#1 spot from CR South's Dominique Franco, clearing 12-7 at VaultWorX Last Chance Qualifier at the VaultWorX facitlity in Camp Hill.

Jones was the winner by a foot over Trinity's Megan Silva and Spring Grove's Nathalie Elliott, who both cleared PA#7 11-7.

On the boys' side, Red Lion's Greg Potter cleared 14-3 for the win over East Pennsboro's Payton Morris, who also cleared 14-3. That doesn't improve Potter's state standing, but Morris moves up to PA#8 with the runner-up finish.

Edward Marshall of MLK was the winner in the 60 meters, taking it in a PA#8 7.12. Bishop Shanahan's Keegan Hughes, who also ran the 60 meters, before, won the 200 meters in a time of 23.10--not far off what he ran at the New Balance Games, but this, of course, is coming on a flat track.

Glen Mills' Keon Rantin grabbed a meet record in the 400 meters, clocking a solid 50.33. That's a PA#6, but all the marks ahead of him came on banked tracks.

In the DMR, Bonner & Prendie held off a hard-charging Penncrest for the win. Bonner was clocked at 10:52 and Penncrest came in at 10:53. Those are PA#13 and 14, respectively.

Penn Charter's Akeem Blake added his name to the long list of athletes in PA who have cleared 6-4 in the high jump. He becomes the sixth one with the PA#7 mark. Yondell Dudley of Wissahickon won the shot put with a throw of 51-2.

Jake Brophy is in shape. If that was evident by his win in the mile a week and half ago at Poreda, Brophy proved himself Saturday taking the 3000 out from the gun and running away from the field. In an effort to avoid an upset at the hands of mid-distance specialist Tucker Desko, Brophy went from the start to finish in a meet record time of 8:36.71 (coincidentally, Brophy broke former Boyertown standout Jason Weller's record. Weller had another meet record broken last week by Quakertown's Hudson Delisle at the TFCAofGP meet at Glen Mills). That's a PA#1 and US#8 for Brophy as well!

LaSalle's Charles Headen has been waiting for his opportunity to pop off a fast 60 meter dash. He got his chance on Saturday, winning and running a PA#2 time of 6.97. He'd been focusing on some of the longer stuff--like helping his 4x200 team to a PA#1 last week--and the strength paid off. Watch his full interview below:

In a close 800 meter race, North Penn's Dante Watson edged out Tennent's Matt Kraus for the win in 1:59.00. In the mile, Souderton's Connor McMenamin made up a big gap to come away with the win in a time of 4:26.94 over Central Bucks South's Matthew Scarpill.

Souderton's Colin Harker was the winner in the 60 meter hurdles in a PA#6 time of 8.39.

The DMR pitted the Council Rocks against each other. South ended up the better team Saturday. Anchor Joe Maguire led a come behind charge in the closing laps to win in 10:43.55 over North's 10:51.71. It's a PA#6 for the Golden Hawks, who have emerged as a medal threat in the event.

The high jump was a good battle between some familiar opponents. Coatesville's Dondre Pittman came out victorious, clearing 6-6 for the win, tying the PA#3 height. Pennsbury's Eric Wacker was second with a 6-5, and Perkiomen Valley's Darnell Randall was third, clearing 6-4.

In the pole vault, Hatboro-Horsham's Nicholas Marino cleared 14-6 for the second consecutive meet to claim the win, amking it his sixth victory of the season in six meets!

Bensalem's Caleb Appiah-Owusu has had a fantastic season already and it got better, Saturday. He already has a PA#4 in the triple jump and he added another one this weekend. Appiah-Owusu won the long jump in a PR and PA#4 22-2.5. Watch his interview below:

Friday night was the second installment of Summit University's "Run at the Rec" in Clarks Summit, Pa.

Anthony Maurent of GAR Memorial remained unbeaten against PA competition on the the season. Maurent won both the 55 dash and 200 meters. His time in the 55 dash was just .01 off his PA#1 time in the event.

Another highlight was Hershey sophomore Andrew Sullivan taking the win in the 1600 meters, clocking a 4:37.24.