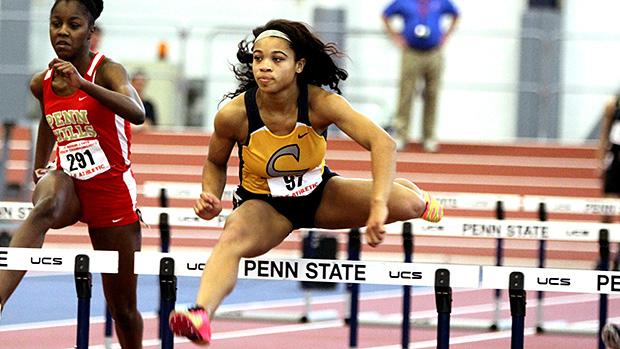 The Downingtown West boys and the Cheltenham girls dominated at Sunday's PTFCA Indoor State Championship at the Multi-Sport Facility at Penn State University.

One of the all-time state records went to a freshman. Pennridge's Kouri Peace shattered the state record, running 23.74 to take down a talented field that included a former state champion, Dasia Pressley of Pennsbury. Peace broke Nicole Leach's 200 meter record of 23.91 from the National Scholastic Indoor Championships in 2004.

Peace also took third place in the 60 meter dash, which was won by another freshman---Thelma Davies of Girard College High School.

Cheltenham's Chanel Brissett also broke a state record---her own---in the 60 meter hurdles. Brissett returned to the track where she broke former teammate Ciara Leonard's previous record earlier in the season. It didn't come easy, though. Brissett decided to double in the 60 dash and 60 hurdles. The prelims, semis and finals of those events are back-to-back.

Brissett still managed to break the record, running a 8.25 in the finals for the huge win. She nearly pulled off the improbable double win finishing second to Davies in the 60 dash in a time of 7.48 to Davies' 7.47.

The Cheltenham girls broke their own state meet record in the 4x200 meter relay with a time of 1:39.48. The Panthers took home the state team championship. They scored 58 points, while North Penn took second with 31 points.

Jordan Geist of Knoch didn't break his own state record, but he did break Ryan Whiting's state meet record from 2005. Geist threw 71-3.25 for the win in a very deep event. It's the icing on the cake for an already fantastic season by Geist.

In the boys' team race, Downingtown West proved to be the deepest team in the state on Sunday. Josh McLemore won both the 200 and 400 meters. He was also apart of the 4x200 that took home gold. Darian Alston won the triple jump. Jaxson Hoey won the mile and his brother Josh Hoey was right behind him in second place.

Here's some more highlights from Sunday:

- CB East's Jake Brophy added an individual track win to his resume, unleashing a vicious final lap kick to catch Dominic Hockenbury of Lake Lehman for the 3000 meter title. Watch the race below.

- Friends' Central's Gabrielle Wilkinson had a busy day. First, she won the mile in 4:55.15, then she took second in the 800 meters before leading her team to second in the DMR. 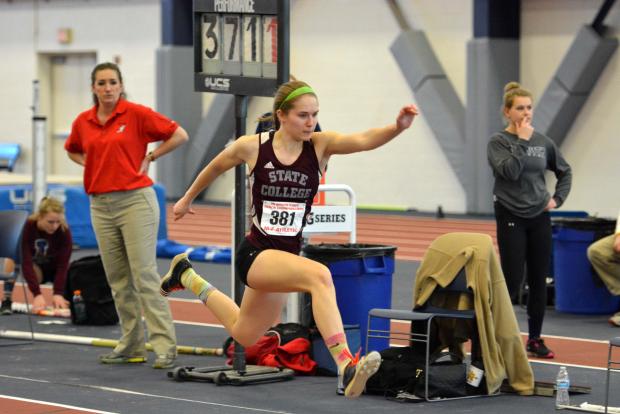 - State College's Veronika Karpenko and Cheltenham's Madison Langley-Walker flip-flopped places in the long and triple jumps, both taking one gold apiece. Langley-Walker won the long jump for the second straight season with a jump of 18-4.75 (which tied Karpenko, but Langely-Walker won on jumps). Karpenko won the triple jump with a huge season best of 40-1.75.

- Speaking of that DMR, it was one of the most exciting races of the day. Pennsbury's Olivia Sargent was passed by Wilkinson on the final lap, but Sargent fought back to grab the win for the Falcons.

- And speaking of that girls' 800, Maddie Villalba of CB West finally got an indoor 800 championship, out-dueling Wilkinson for the win in a time of 2:09.69.

- The boys' 800 was stacked as well. Beaver Falls' Domenic Perretta, in his first indoor state championship, and first time on a banked track beat out Carlisle's Matt Wisner, Seneca Valley's Mike Kolor, and Downingtown West's Jaxson Hoey for the win.

- Imhotep's Ade Jones-Roundtree won a very close and competitive 60 meter dash in 6.88. Six boys went under 7 seconds in the race.

- Upper Darby's Mason Weh dipped under 8 seconds for a long awaited state title in the 60 hurdles. Weh won in 7.98. 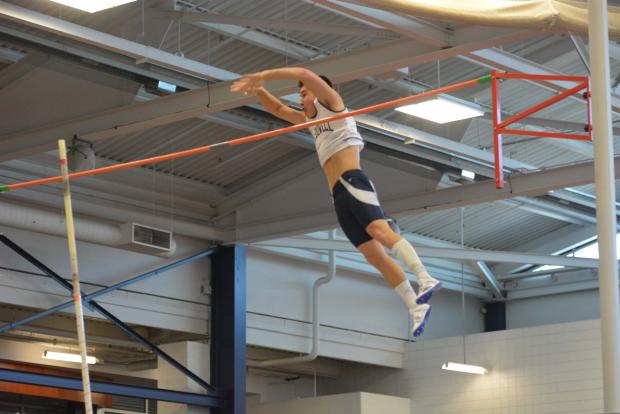 - Caleb Sanford of McDowell and Hayden Fox of Hempfield battled closely as they have a long time in the boys' pole vault. Sanford was the winner today, clearing 15-6 for the state crown.

-The Penn Wood girls came back after a dropped baton in the 4x800 to win the 4x400 later in the day.

- Abington closed out the meet with a dramatic win in the 4x400. Anchor leg Keion Broadus ran down Jaxson Hoey of Downingtown West for the win.

There were plenty other great moments during the week that we'll touch on throughout the week. Stay tuned for more coverage, videos, and photos from PennTrackXC.