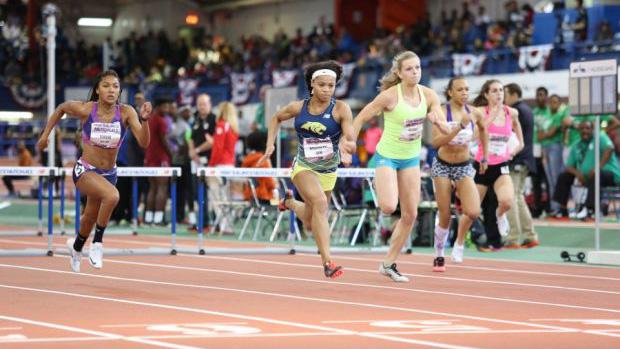 Two more state records went down on Sunday at New Balance Nationals Indoor, officially closing out the indoor season for Pennsylvania athletes. In addition to the to records, there were a few near records and even more great performances across the board.

In the 60 hurdles, Chanel Brissett of Cheltenham knocked off a few more tenths off her state record. The junior took fourth in what could easily be described as the fastest 60 hurdles prep race ever put together. She actually broke the record twice this weekend. In the semis, she ran 8.24 to break her previous record of 8.25 from indoor states. Then Brissett ran 8.23 to improve upon that state record in the finals.

Girard College's Thelma Davies kept up her improbable freshman season breaking not only the national freshman class record, but the PA state record as well. In the finals, Davies blasted a 7.37 for fourth overall in a field of all seniors and juniors besides her. Davies breaks the previous state record, which has stood since 2002 by Jakki Bailey of Kennent, who ran a 7.44. Davies tied the freshman class record at indoor states, but her time Sunday gives her sole possession of the record. The future just keeps looking brighter for one of PA's premiere sprinting stars. 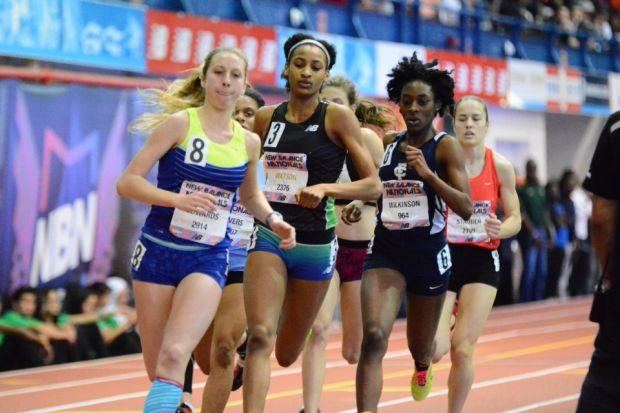 The 800s were something to watch! First was the girls' 800, featuring Friends' Central's Gabrielle Wilkinson and Cardinal O'Hara's Olivia Arizin in the championship section. Wilkinson took third place in a stacked race, running a 2:06.87, the fastest 800 run by a girl from PA since Chanelle Price's state record of 2:04. Wilkinson's only a sophomore! Arizin came across sixth in a 2:09.78, bettering her own PA#3.

In the boys' 800, Domenic Perretta took the race out and held strong. He was passed on the final stretch, but still ended up in second place with a 1:50.58, nearly a state record. That ranks him third all-time in Pennsylvania and it was just Perretta's second time on a banked track. He missed Kyle Francis' state record by .03. The future is mighty bright for the Beaver Falls senior. From an earlier heat, Pennridge's Tucker Desko won his heat in a PA#4 1:53.38.

Jocelen Ruth earned All-American status in the weight throw. From the first flight, Ruth threw 54-4.75 to grab sixth place. That's a huge PA#1 to close out the season for the Kutztown senior.

In the girls' triple jump, Veronika Karpenko became all All-American, finishing third with a jump of 40-3.5, just off her season best. Madison Langely-Walker of Cheltenham was eighth with a jump of 39-3.25 to better her own PA#2.

Josh McLemore stayed busy on Sunday. First, he took fourth in the hot heat (fifth when the heats were combined) of the 400 meters. He ran a PA#1 time of 48.00, just missing breaking 48 seconds. Then McLemore got back on the track shortly thereafter to place sixth overall in the 200 meters with a time of 21.96. 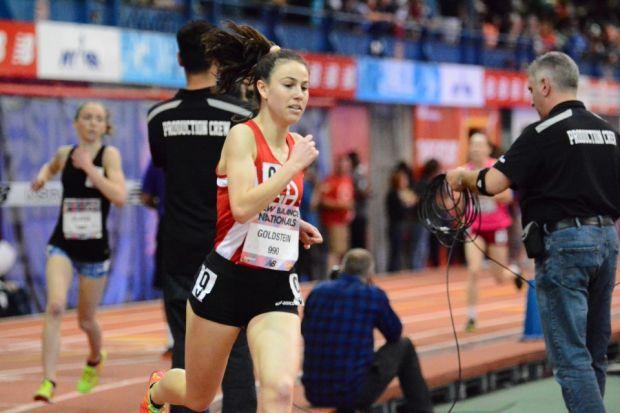 The girls' 2 mile was loaded with PA talent. In a stacked field, Germantown Academy's Abbe Goldstein was the top PA finisher, placing fifth in a time of 10:22.55. That caps off an excellent indoor for Goldstein. Downingtown West's Aislinn Devlin was seventh in 10:27.96, getting some revenge on Scranton Prep's Erin Feeney, who beat Devlin two weeks ago at indoor states. Feeney was right behind Devlin, taking eighth place in 10:28.92.

The Abington boys' 4x400 took fifth overall. They were just off their own PA#1, but still ended their season with a solid race, clocking a 3:20.49.

In the boys' mile, Mike Kolor of Seneca Valley was the top PA finisher and the lone PA runner in the hot heat. Kolor got stuck in the back early on, but worked his way up to finished eighth in his heat and 13th overall in 4:13.50. Downingtown West's Josh Hoey was 18th overall in 4:20.08.

Dasia Pressley of Pennsbury ended up seventh overall in the championship section of the 200 meters, running a time of 24.28.

In the boys' weight throw, North Pocono's Matt Slagus threw 66-9.25, a season best, which was good enough for tenth overall. He was the top PA finisher. Jordan Geist of Knoch fouled twice, but still got off a 63-11.5 first throw. He finished 14th in the competition.

Darian Alston of Downingtown West was the top PA finisher in the boys' triple jump. Alston leapt 46-10.25 to place 11th overall. Milton Hershey's Treyvon Wheeling was 22nd place with a jump of 45-1.75.