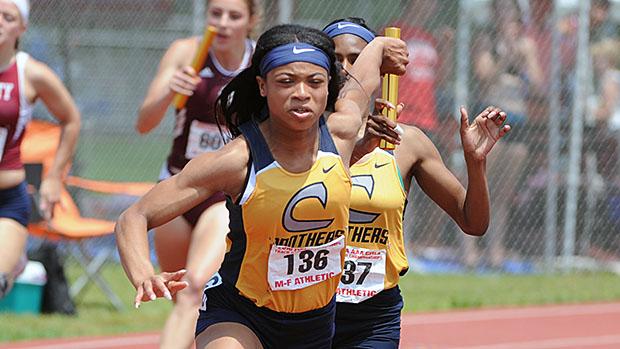 "Last night, we thought we were dead in the water," Cheltenham coach Kelly Jensen quipped after receiving the trophy as AAA team champions on Saturday afternoon.

Instead, his Panthers were anything but that, en route to another team championship, a state meet record, and an all-time state record. But it looked for a time on day one that none of that would be possible.

Star Chanel Brissett banged her knee on a hurdle in the prelims of the 100 hurdles. She managed to win her heat and advance to Saturday's semifinals, though. Later in the day, she false started out of the prelims in the 200 meters, where she was a projected medalist.

"I had intentions to go for the national record yesterday because I had fresh legs," Brissett said of her high hurdles prelim.

Dejected and with her knee wrapped in ice, Brissett hobbled around the infield on Friday. All thoughts of state records in the hurdles or the 4x100 seemed to take a backseat. As the wind and dark skies swept across Shippensburg in the afternoon, forcing the cancellation of some 4x400 preliminaries, even Cheltenham's hopes of repeating as team state champions perhaps seemed in jeopardy.

'A sprinter that just does hurdles'

But Brissett and Cheltenham came back on Saturday with renewed vigor.

"When I got back to my dorm, I told myself '(Saturday) you're going to run regardless.' You have to be more mentally confident than physically," Brissett said. "I told myself that I'm gonna run and I'm not gonna feel it, and I didn't." 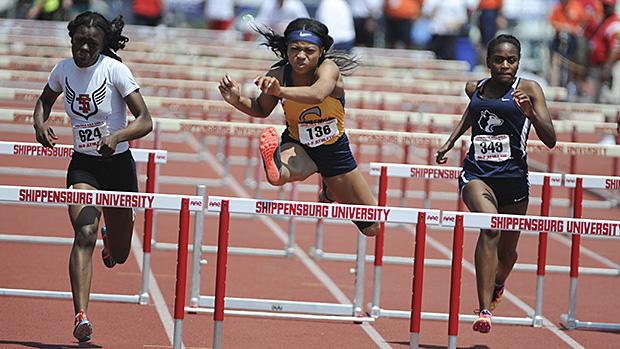 Brissett made it through to the finals in the 100 hurdles with a 13.54 in her semifinal heat, signaling that yes, the knee seemed to be OK. Then it the finals, Brissett popped a 13.19 for the win, tying her wind-legal PR that she ran at the Florida Relays earlier this season. She also broke the PIAA meet record, which was formerly held by Brissett's former Cheltenham teammate Ciara Leonard. The win didn't come without a little scare coming up on Brissett's right.

"In the finals I felt phenomenal," she said. "I got out pretty quick. I was trying to keep it clean mostly because I couldn't hit my knee again---it was killing me. After I got over the seventh hurdle, I noticed someone was starting to gain on me, so I started to speed up."

The time was slightly off what Brissett was aiming for coming into the weekend. She was shooting for 13.03, which is Vashti Thomas' National Federation High School record, but with all things considered, she was certainly pleased with the win.

This was really Brissett's first season of focusing on the hurdles. She raced the high hurdles at just one invitational last season, while Leonard, who graduated last year, grabbed the headlines in the hurdles. Brissett was busy winning the state title in the 100 meter dash. Despite her success over the hurdles, Brissett isn't ready to part ways with her title as a sprinter: "For now, I'm just going to go with 'I'm a sprinter and I just do hurdles.' I'll stick to that," she said.

Brissett wasn't done after winning the hurdles, though. After getting off the podium, it was time to focus on the relay.

It's been quite the season for the Panther quartet of Bria Barnes, Brielle Lewis, Alexis Crosby, and Brissett in the 4x100 meter relay. After taking fourth place from lane one in the Penn Relays' Championship of America and bettering their time the next day in the Tri-State finals (46.36), you had to figure the hot conditions could produce something special on states Saturday. But just how special?

After some rainy conditions derailed the relay a shot at sub-46 at the District 1 Championships, it seemed be in the cards for Saturday afternoon. But how healthy was Brissett? Crosby ran the 400 finals the event right before the 4x100. Would she be up to the task in the relay? 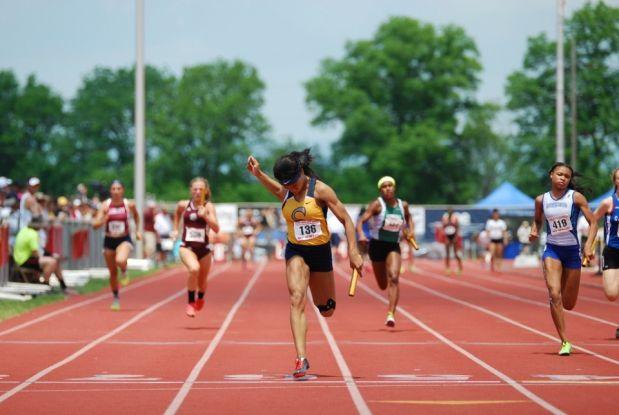 Cheltenham answered those questions quite affirmatively.

Barnes started and handed off to Lewis, who ran the backstretch and got it to Crosby. Crosby completed the exchange with Brissett who was home free. First place. Another state championship. A 45.78. A 45.78?!

The entire race itself was historically fast. Runners-up Norristown weren't far off that Truman mark, clocking a 46.46. Central Bucks South was third across the line in a 47.03.

Though that state record stood since long before any of the four Cheltenham girls were even born, it didn't take long for the team to recognize the significance of its feat.

"I ran across the infield and hugged Brielle (Lewis) and we fell over," Crosby said. "We were so excited and so thrilled. We really wanted 45 and we got it."

"To have the state record is absolutely phenomenal," Barnes added. "We came into this meet really wanting this relay. We really worked hard everyday." 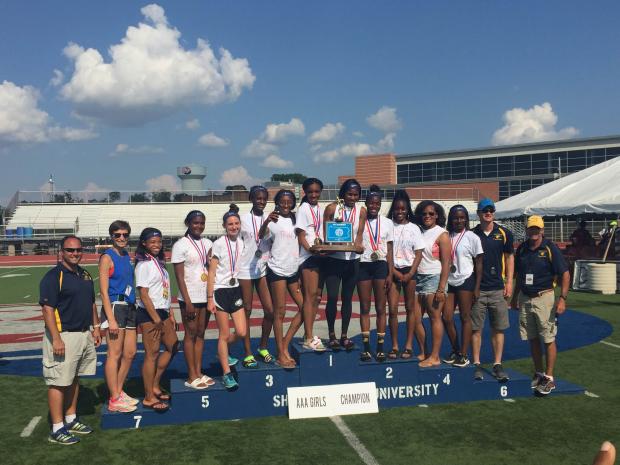 For Cheltenham, it's not hard to see where the motivation comes from. All around the track and field, there's an incredible depth of athletes. Crosby was second in that 400 meter final. Sophomore Madison Langley-Walker earned a pair of medals in the jumps, taking third in the long jump and fourth in the triple jump. MaryGrace Rittler earned an eighth place medal in the 3200. Lewis and shot putter Ashley Alexander just missed medals in their respective events.

"If your teammates are pushing you in practice, when we get out here against another team, you're ready for it," Crosby said. "You already know what to expect in a race."

But that 4x100 record, like all records, isn't safe. In fact, it's the record holders themselves who will have a chance to give it a go again next year. All four legs of Cheltenham's relay return.