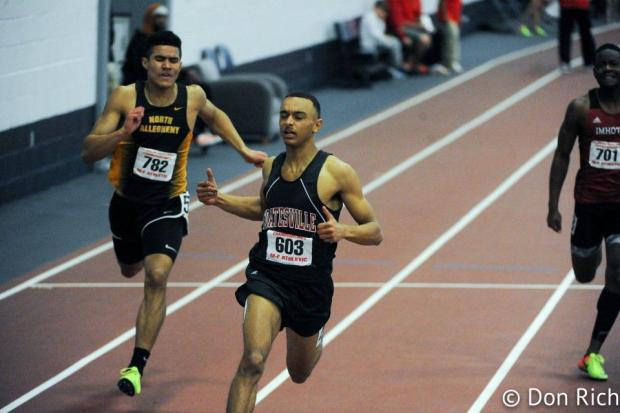 Coatesville senior Terrance Laird, who's life story was featured on FloFeatured this past week, entered the Pennsylvania Track and Field Coaches Association Indoor Championships at Penn State University on Saturday hoping to break the state record in the 200m.

He didn't claim that honor just yet, but he did earn his first state title by winning the 200 in 21.42 seconds, his fourth best time over the indoor season.  A year ago, Laird missed the state meet from a shocking injury -- which began in the weight room and was the result of horseplay -- that saw the then-junior spend a few days in the hospital.

Coatesville's Terrance Laird wins the boys' 200 meters in 21.42. No state record, but still a title for Laird! #PTFCAStates pic.twitter.com/n2RlYDns7n

But the senior wasn't finished on Saturday. From there, Laird had one more race to go all-in for. In the 4x200, he was opening the Red Raiders relay. Good news and bad news followed.

Despite splitting a reported 20.53 seconds in the first leg of the relay -- Red Raiders coach Damien Henry said splits can be recorded differently, though Laird's opening leg was reported by one or two coaches -- Coatesville was DQ'ed from the race.

Laird, who already owns Coatesville school records in the 60m, 100m, 200m and 4x100m, has one more indoor meet in New York, New Balance Nationals Indoor, to achieve the all-time indoor state record in the 200m. Laird is looking to eclipse the 21.22 second time that former Altoona Area great Brady Gehret accomplished in 2010.