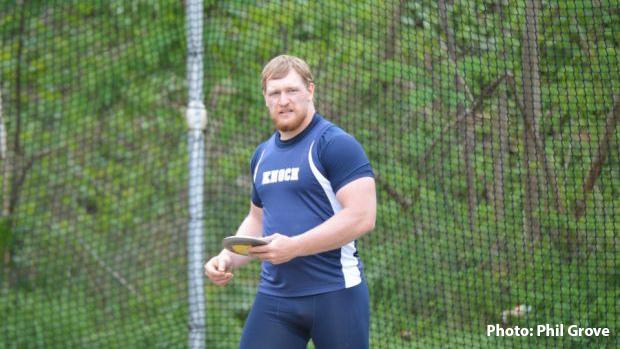 This is part one of two of a feature on Jordan Geist, one of Pennsylvania's most decorated track and field athletes of all-time. Part two will premiere tomorrow.

He carries the tools of his trade to meets in a handmade leather bag given to him by Pennsylvania's longtime shot put record holder and history's first "70-70" thrower.

He greets PRs and records with the same no-nonsense, workmanlike approach that he takes into the circle for every throw.

The past several winters, he has practiced several days a week in a dimly lit, unheated former ceramics plant that is now home to a baseball bat manufacturer and serves as an offseason home for boats and sports cars.

Jordan Geist is a throwback to years gone by, but at the same time, the 18-year-old is a glimpse into the future of the throws. Thanks to the Knoch High graduate's powerful right arm, the state record book and national top 10 will never be the same.

In a whirlwind eight days this month, Geist threw for the final time officially with high school implements before quickly transitioning to international shots for runs at a pair of national teams. The greatest prep thrower that Pennsylvania has ever seen did not disappoint, achieving his No. 1 goal for 2017 and adding several PRs and state records to an already memorable young career. 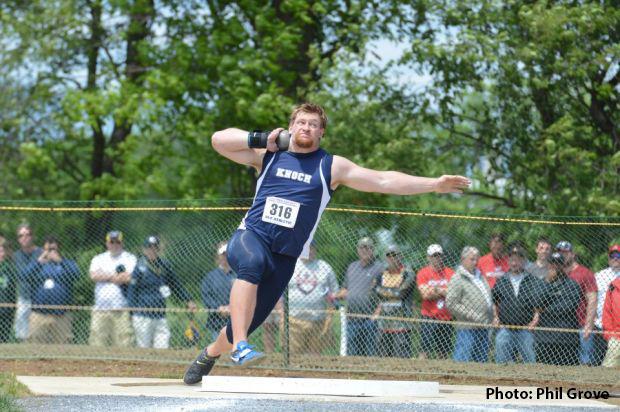 Pennsylvania's leader indoors and out

Nicknamed the Beast, Geist headed into his final scheduled meets of 2017 as Pennsylvania's all-time leader in the shot, discus and weight throw. He had dispatched two long-standing state records - Ron Semkiw's 70 foot, 1.75 inch shot put from 1972 and Brian Milne's 207-4 toss from 1991 - with a barrage of 70-plus tosses over the past 17 months and a recent run of 200-plus discus throws.

So what makes Jordan Geist different from all who have come before him in Pennsylvania and one of the all-time prep greats? His future coach at the University of Arizona, TJ Crater, has some ideas.

"Jordan's gifts are at a very rare level," Crater said. "Of course, college coaches are always looking for special athletes to recruit. Jordan's speed, strength and technical insight are at a level I expect out of an elite NCAA thrower. I have worked with some elite level shot-putters, and Jordan has those tools.

"I thought he was exceptionally fast and explosive (the first time I saw video). The first word that came to my mind was violent. As I've watched him develop over the last year, his technique has come along to match his physicality."

Another who knows Geist and something about high-level throwers is Gary Aldrich, who is head coach at Carnegie Mellon University and also the throws coach for the U.S. team at this summer's World Championships in London. Aldrich coached Jordan's mom and coach, Judy, at Slippery Rock University and often sees and advises Geist at competitions.

"I don't really think anything has truly surprised me about Jordan and his success," said Aldrich, who also was a U.S. team coach at four other international events. "I know how hard he works. He has great people around him. He has handled everything so very well and that is because of his mom, dad (Jim) and brother (Jared). I think (club coach) Mike Hambrick has done an incredible job as well.

"The key is Jordan is willing to take criticism and input and then use it to make himself better. What more could you ask from an athlete as a coach. Again that comes from his mom and dad, they were that way as (All-American) athletes themselves." 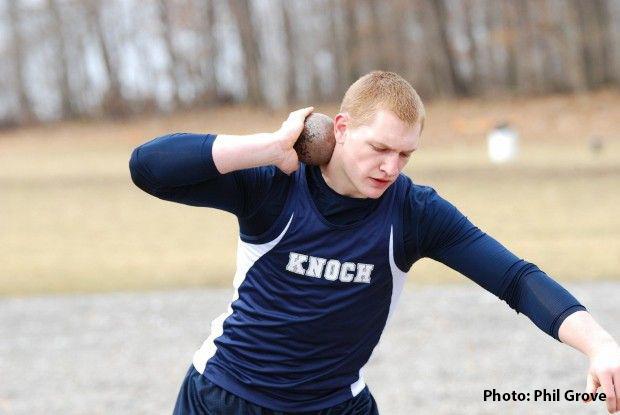 In his 10th year of throwing, Geist said he began to have a different outlook on his sport in junior high.

"The spark didn't come until probably seventh grade, whenever I would throw against Brennan and realized just how much of a sport it is, not only with me but with people in our community as well," Geist said of his friendship with former Knoch teammate McTighe. "Seventh and eighth grade is whenever I realized it was something special. That's why ninth grade I started giving up basketball because that was the major weight loss (sport). I started focusing on track and football, just stuff that I can keep lifting and getting stronger.

"Sophomore year when I went to (New Balance) nationals and placed there pretty much was the deciding factor to quit football. Ever since then it's just been the one thing I have concentrated on."

Even during his senior year at Knoch, Geist admitted to breaking into throws drills at the most interesting times and places.

"I'm at the point now where I'll just unknowingly start doing spins on the kitchen floor," he admitted. "I'll do wheels, I'll do the full stand, I'll go through the motions of the spin, hit the different positions just by nature.

"That's something I actually (loved) to do in school was just do hammer turns throughout the hallway. I might accidentally hit someone, but it's helped me so far."

Over the past two years, Geist has been dedicated year-round to the throws, choosing to focus solely on track and field.

"It was definitely a big decision because it's not like I wasn't very good at football," Geist said of giving up on the gridiron before his junior year. "I was a pretty good football player, but it started getting to the point where it just wasn't fun for me anymore. Practices were just a drag pretty much.

"I never really went through a phase of people hating me (because I quit football), maybe just one or two people second-thought it like maybe, 'He shouldn't be doing this. He's a good football player.' There's more to my career than football, but they weren't able to digest that at that point."

Geist talked with PennTrackXC after the Knoch Relays in 2014 where the then-freshman threw 61-4:

A dedicated student of the throws and many of the former and present shot put stars, Geist has benefited in various ways from dialing up shot put videos on YouTube.

"Whenever I look back at videos, I'd think about where they were when they were juniors and seniors in high school," he said. "Getting the junior (class) national record was awesome because it made me realize with all those names I threw farther than any of them at the age that I did, but every time I see a good Adam Nelson throw or a Reese Hoffa throw, I still get a little chill because of what they mean to the sport." 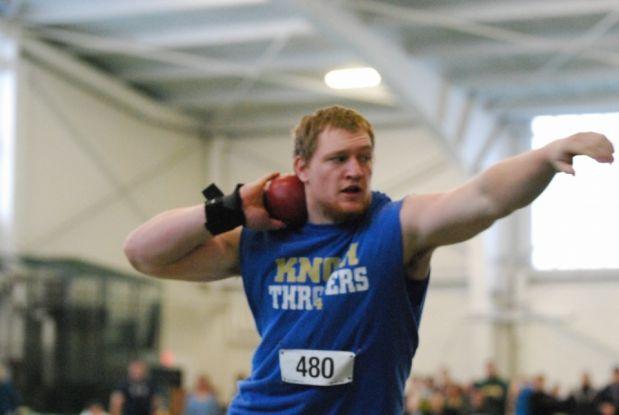 A foundation built at The Rock

Whether by chance or divine intervention, Geist put his name in the state record books for the first time at a location that played a major part in his development, Slippery Rock University. His 69-6.5 heave in January 2016 surpassed former world champ Ryan Whiting's indoor prep best from 2005 and added to an SRU legacy started by his parents, who accumulated a total of six All-American finishes in the javelin and shot put, and fellow SRU Hall of Fame members Hambrick and Aldrich.

"He may not be going to Slippery Rock, but it is a blast going to meets and seeing the Slippery Rock reunion which breaks out," Aldrich said. "I think that is where we all learned to work together and help each other. Mike taught me how to throw the discus at Slippery Rock initially."

Being surrounded by those who are such a part of the state and national throwing community and have excelled in the throws, has shown through in all facets of the teen standout. Geist's willingness to invest time and energy in long-term goals was nurtured by those closest to him.

"It excites me," Crater said of Geist's maturity and development as a student-athlete. "His maturity and perspective stood out to me during the recruiting process. Many times, athletes with Jordan's marks and pedigree expect a payoff every day. Jordan sees every repetition as a part of the process to meet an ultimate goal.

"Every repetition is a learning experience and a link to the next rep. When Jordan announced his commitment to Arizona, he said his goal is to maximize his throwing by his senior year. As a college coach, this perspective will be so helpful to working with Jordan and allow for a long-term plan to help him to his goals. He is humble and has a very workman-like attitude. That, coupled with his talent, will lead to success." 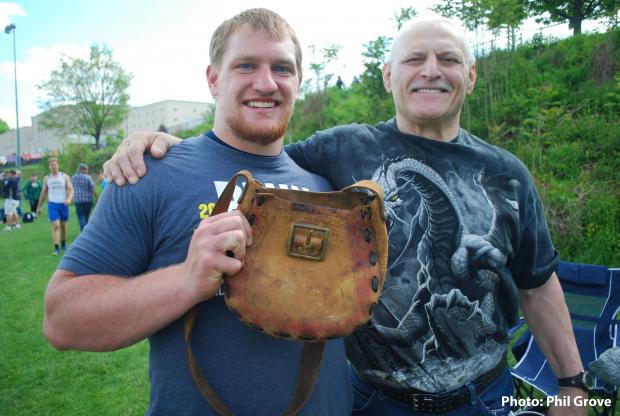 Passing of the shot put torch

Geist first met Ron Semkiw at the Baldwin Invitational in 2015 where the then-sophomore showed some of his potential by throwing 69-1, scaring Semkiw's all-time PA best with the No. 3 mark in the U.S. that year and the No. 3 put ever by a Pennsylvania prep. That first meeting set in motion a gesture by the former Baldwin standout of gifting a handmade shot carrier that he had received back in the 1970s from former world record holder Al Feuerbach while training in California.

"I had to clean up (the bag). I figured hopefully at the right time maybe it would give Jordan a little incentive. I know if I got something like that, that would have gotten me really excited in high school."

The gift, which he received at WPIALs in 2016, initially caught Geist off guard. Soon he realized the significance of the throws treasure he received.

"Whenever he showed me it in the bag, all I saw was leather so I thought it was a baseball glove," Geist said of his initial reaction to his new calling card gifted from Semkiw. "Then he took it out and said this is the shot put carrier that I used to have, and I thought this was cool.

"And then he showed me his name engraved in it, and I thought this is a really cool thing now. I think this will turn into a token that we will pass down through the years for Pennsylvania shot putters."

In return, Semkiw grabbed a front-row seat to several more of Geist's competitions in western Pennsylvania, most recently at this year's WPIAL finals held annually at his alma mater.

"He's definitely been very supportive, very excited," Geist said of Semkiw, who was the first ever to reach 70 feet with the 12- and 16-pound shots. "He's just as excited as I am doing what I'm doing. It's a really special feeling because I don't know if I would be taking (losing the record) as well as he is.

"The gift especially it just means a lot. It's a physical representation of the torch he is passing on to me."

Semkiw was the gift giver in this unique relationship, but in the end, the former record holder also received as he was able to return to the sport he loves and watch a high schooler compete at and above the level he reached decades ago.

"I'm just glad to see him keep improving," Semkiw said of Geist. "You just have to keep improving and keep moving your level up obviously. He has everything that it takes to do that. It's just nice to be around and help him in any way or just be there to watch him do it."

To read part two of the feature by Phil Grove, click here.