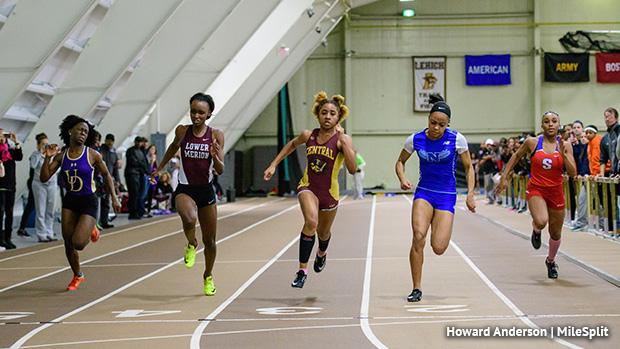 In one of the best races of the night, Christina Warren of Perkiomen Valley edged out Upper Dublin's Madison Langley-Walker in the 60-meter hurdles. The pair walked away with PA#1 and PA#2 times, respectively. Warren won it on a lean in 8.62, while Langley-Walker clocked 8.66 for second. But, of course, a rematch looms next week at states.

Bishop McDevitt's Blair Knuckle cleared 5-4 to win the high jump, while Methacton's Camaryn Rodriguez took home pole vault gold with a clearance of 11-0. Haverford's Cecilia Katcavage claimed her fifth win of the season in the shot put. She threw 36-10.5 to take the win in the event.

In the 60 meter dash, Central's Lauryn James put down a big performance. After running 7.72 in the prelims, she came back to grab the win in the finals, posting a time of 7.69 for a new PA#4. In the 200 meters, Cheltenham's Alexis Crosby held off Coatesville's Arianna Eberly for the win. Crosby clocked in at 25.52 and Eberly went 25.61. Springside Chestnut Hill's Alexandria Kitchell went 58.86 for the win in the 400, going out in the lead and keeping it the rest of the way.

In a very close 800 meters, Penn Wood's Kyra Carroll earned the win in a time of 2:19.30, kicking her way to the win. The mile was not as close, as Jessica Schneider from the Academy of Notre Dame dropped a PA#8 time of 5:05.83 to run away with the victory. In the 3,000 meters, there was an issue with the lap counting, which caused the lead runners to run an extra lap. Allyson Clarke of West Chester East took the win, and Coatesville's Brooke Hutton was second.

Penn Wood took the win in the 4x200-meter relay in comeback fashion over Central, running a time of 1:47.22 for the victory. Neumann Goretti asserted itself as the best in the state in the 4x400-meter relay. NG ran away with the 4x4 win, clocking a time of 3:57.48.