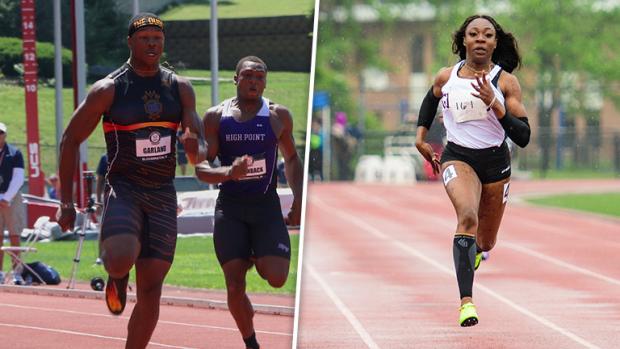 Thelma Davies broke her own 100 meter state record, Kyle Garland started off the decathlon in terrific fashion, and a Pennsylvania high school alum punched a ticket to Finland during the first day of action at the USATF Junior Outdoor Championships in Bloomington, Indiana.

Davies ran 11.42 in the finals of the 100 meters to place fifth. She was the only non-collegian that made the final. USC's Twanisha Terry won in 11.24. Davies' ran .01 faster than she did at New Balance Nationals Outdoor a year ago, when she set the state record, running 11.43. This closes out Davies' junior season, which included her third straight state title in the AA 100 and 200 meter dashes.

Garland, a recent Germantown Academy graduate, dominated the opening day of competition in the men's decathlon in the Indiana heat. In total, he scored 4090 points at the midway point of the event. Garland ran 10.95, the fastest time in the field, in the 100 meters to start things off. He followed that up with a leap of 22 feet, 5 inches in the long jump, the second best performance among the decathletes.

The University of Georgia recruit uncorked a big throw in the shot put, a 51-00.25 heave, just off his PR in the event and over six feet better than his next closest competitor. He cleared 6-08 in the high jump, tied for the best leap of the event. He closed out the day with a 50.57 in the 400 meters, the second fastest time of the day. He'll pick back up tomorrow with five more events 311 point lead over second place.

The women's javelin was jam-packed with PA talent. Maura Fiamoncini, a current Bucknell Bison and Mount Carmel Area graduate, placed second in the competition. Her throw of 177-03, less than a foot off the winner, Dana Baker of Kansas, also earned her a spot on Team USA, which will travel to Finland for the World Junior Championships, set to start July 10.

The University of North Carolina's Madison Wiltrout placed third with a toss of 173-05. The former Connellsville standout holds the high school national record. Because of injuries, this was Wiltrout's first and only javelin competition of the season. Mifflin County rising senior Skylar Ciccolini placed fourth with a throw 162-05. Penn State's Madison Smith (New Oxford '17) was sixth with a throw of 155-08 and Kane Area graduate Trinity Clark was tenth with a toss of 134-02.

Austin Kratz ran 10.42 to place fifth in the 100 meter final. The recent Dock Mennonite Academy gradate and Arizona State University recruit. Kratz will return Saturday for the 200 meter prelims set to go off at 7:05 P.M.

Esther Seeland, a State College Area graduate, got through to the finals in the women's 800 meters. The AAA state champion went 2:08.83 to finish third in her heat and earn an automatic qualifying spot. That time is an outdoor best and just off her indoor PR. The final is set for 6:20 P.M. on Saturday.