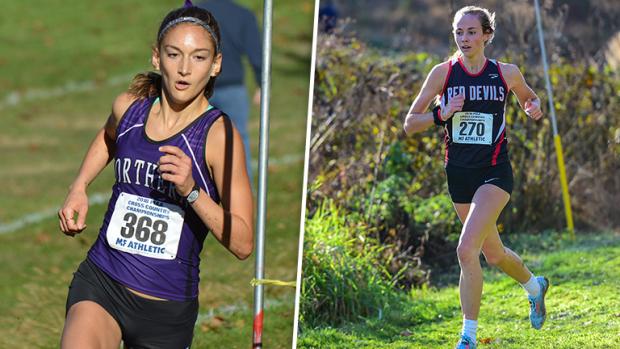 Marlee Starliper made it look easy in the second half of the race. The state's top runner took care of business up front, while Central Cambria returned to the top of Pennsylvania with a terrific team effort to hold off the defending champs from Danville Area.

In the end, she left no doubt about it. But onlookers may have been surprised when Marlee Starliper wasn't leading at the 2K marker in the AA girls race.

Instead, Taryn Parks of Greencastle-Antrim, the 2016 AA state champ, was leading Starliper, the 2017 AA state champ, through about the midway point. Parks went out aggressively, trying a different strategy against her District 3 rival. Starliper, though, never let Parks get too far away and once she took the lead from her, she never had to look back.

Starliper, a Northern junior, extended her lead in a big way and came home to win her second straight XC state title in 17:53, nearly a minute over Parks, who held on for second in 18:49. After letting Starliper get away early at earlier matchups at Mid-Penns and District 3, Parks had no regrets about her strategy.

For Starliper it's a repeat victory, just off her time from a year ago, but on a course that ran much slower than 2017 due to a wet and muddy course.

Sharon's Gianna Labbiento took third in 19:05, up a spot from her third place finish a year ago. She won six races this season. Fairview's Maddison Hayes ran her second fastest 5K of the season, and definitely her best race of the fall to take fourth in 19:21.

Freshman Olivia Haas of Blue Mountain was fifth in 19:23, followed by Brownsville's Gionna Quarzo (sixth in 19:30) and North Schuylkill's Cori McCormick (seventh in 19:32).

Central Cambria was on a mission Saturday. In a strong AA girls' field, the Red Devils came out on top, scoring 92 points to take the state title.

The Red Devils got "one for the thumb" as coach Randy Wilson called it after the meet for CC's fifth state championship in program history. It started up front for Central Cambria, as freshman Stella Kuntz paced the team with a ninth place finish in 19:44. Senior Paige Wess wasn't far behind, placing 12th in 20:04.

Freshman Faith Wilson (42nd), sophomore Ella Vrabel (51st), and senior Kacy McKeel were the other scorers for the Red Devils. After missing states in a tough District 6 last season, Central Cambria came back with a vengeance in 2018, returning to the top of the state for the first time since 2014 when the team won in Class A (CC won three straight AA state titles between 2007 and 2009).

The reigning champs from Danville Area didn't go down without a fight. The Lady Ironmen took second with 105 points, 13 off Central Cambria. Elaina Klinger and Marisa Maffei were 14th and 15th to lead the team. Danville also made up some major ground throughout the race to go from fourth at the mile to second in the end.

Northwestern Lehigh had the best spread in the race (41 seconds 1-5) to take third place. South Fayette, the WPIAL champs were fourth with 149 points, and Warrior Run was fifth with 153.