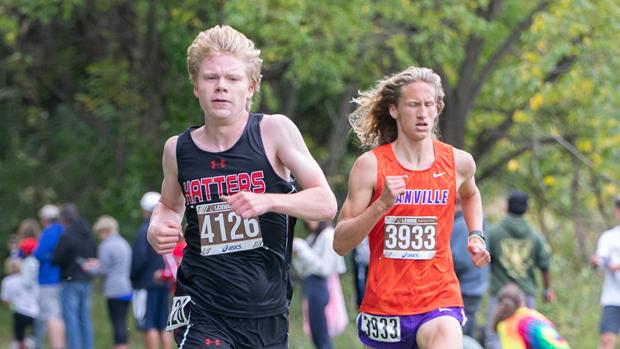 A week after winning the PIAA Foundation Gold Race, Brian DiCola raced in another stacked field at Paul Short.

He went out relaxed, intending to lay back through the first mile to let the race come back to him.

Through the first 1200 meters, Ryan Pajak (Ringgold) and Rory Lieberman (Danville) held a ten-meter lead on the field, and DiCola positioned himself in the middle of that chase pack. Over the next 400 meters, DiCola mended the gap and set himself on the shoulder of Lieberman, who took control of the pace.

Over the next mile, not much changed. Pajak, Lieberman, and DiCola remained stride-in-stride. Going up the back hills, Lieberman and DiCola created some separation between them and Pajak, but the race was far from over.

Lieberman and DiCola remained stride-in-stride until the closing 400 meters, when DiCola unleashed a massive kick to cross the line in 14:43.

In doing so, DiCola smashed Gary Martin's 2021 Paul Short Record of 14:49 and Paul Springer's course record of 14:47, set at the District 1 Championships in 2006. We would've said it was impossible a year ago, but DiCola now holds the second fastest time in Pennsylvania State history.

The performance was speed rated by Tully Runners at a 193, matching Martin's 193 from last year.

It was a historic run all around, and to compound matters, DiCola has the seventh fastest time in the US this year.

DiCola's effort shouldn't take anything away from Leiberman or Pajak. They both broke 15, running 14:49 and 14:58, respectively. As a result, Lieberman ranks as the US #13. Forty boys ran sub-16 a Paul Short.