The North Allegheny girls walked away with the team title, and the Episcopal Academy boys snagged a transfer spot at Saturday's Team Northeast Regional. Both teams will advance to Team Nationals. Further, JoJo Quarzo (Brownsville) earned an individual championship, beating some of the best runners in the region.

The road to National Championship berths looked vastly different for these two programs.

The North Allegheny girls entered the Saturday championship after winning a fifth straight state championship. As heavy favorites, they had one task to deliver.

They did, and North Allegheny was dominating by the mid-point of Saturday's Championship. They had 22 points, and their Top-5 were all in the Top-15. NJ's Union Catholic and Haddonfield sat 50 points back but were not in a position to contend.

There was little movement in the second half, and North Allegheny marched to the title. Wren Kucler earned a 1 Stick, and as the Top Team representative, Eva Kynaston earned a four stick. Grace Rowley, Erin McGoey, and Robin Kucler earned five, six, and seven points, respectively. By winning the Championship, North Allegheny became the first Pennsylvania girls' program to advance to Team Nationals since 2015. The Tigers will represent Pennsylvania for the first time in the girl's team history. The Episcopal Academy boys after one of their many wins this season.

For the Episcopal Academy boys, a Cinderella story continued.

The Pennsylvania Independent School State Champions entered the meet as slight underdogs. Sure, we were inspired by their performance at Paul Short, but the squad hadn't been battle tested. Posting strong times and competing with the best in the Northeast are different things, especially in Cross Country.

But they proved the pundits wrong and rose to the occasion on Saturday.

Episcopal sat in third through the halfway mark, thirty points back from Union Catholic (NJ) in second. That all changed in the final 2K when Union Catholic's Evan Weber suffered some sort of setback (We do not have details at this time and do not want to speculate). He lost 170 spots over that span despite finishing 28th at NJ's Meet of Champions last week.

Episcopal pounced and held off a charging Phillips Exeter squad for the second-place finish. 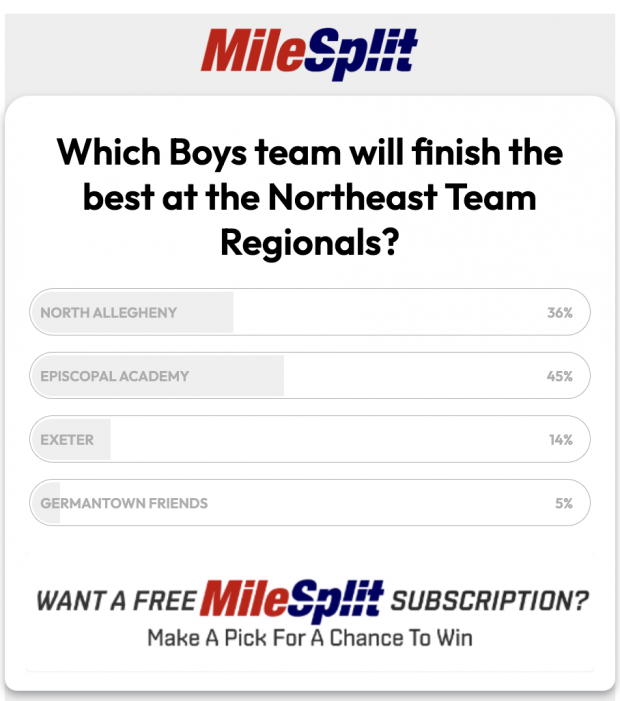 It was yet another team effort for the Episcopal Academy boys. Aidan McHugh finished in 12th,  just ahead of North Allegheny's Jack Bertram. He ran 16:10, which equates to a 184-speed rating. Michael Woolery had a bounce-back day and finished in the top 20, shortly behind McHugh. Then the PAISAA Champion, Dakin Ebmeyer, grabbed 25th. Dawson French and Ethan Zhou rounded out their top 5 as the squad split 1-minute through their Top 5.

Zhou, usually the team's seventh man, had a breakthrough race when it mattered most. Without him in 60th, the squad would not have finished in the Top-5.

North Allegheny tried to make up ground throughout the race but could not make up their early deficit. They finished in fifth, ahead of UC.

With the qualifying bid, Episcopal became one of 10 programs to ever qualify for Team Nationals.

Stay tuned to Pa.MileSplit for previews of the multiple National Championships this week.