Tommy Gruschow has range, confidence, and four golds from District 3

SHIPPENSBURG -- Just when you thought Tommy Gruschow couldn't do it all, the Trinity senior goes ahead and makes you look stupid for ever having doubted him in the first place.

The indefatigable Gruschow has no limits.

"You can really put him anywhere on the track," Trinity High distance coach, John Oszustowicz, said.

And that includes the 400, which he didn't run on Saturday but probably could have if he wanted to -- he was seeded fourth in Class AA. 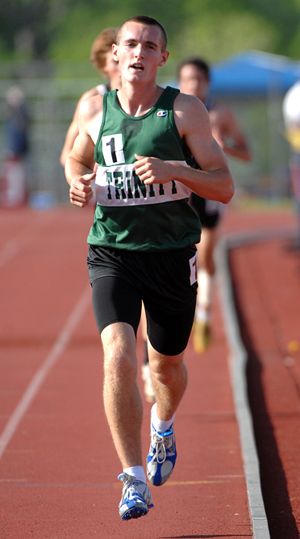 The Trinity senior, a Mount St. Mary's University commit, won three outright gold medals and added one relay during the District 3 Class AA Championships on Friday and Saturday at Shippensburg University -- and all but one came on Saturday.

That hasn't been done in, well, no one quite knows…

But he had help, of course.

He won that fairly easily, bursting out to an early lead before coasting to a 4:24.90 time, which was two seconds faster than Kutztown's Nathan Noll.

The 800, though? That was probably his most difficult, and sneaky, win of the championships.

He was in second nearly the entire way, taking orders from teammate Derek Pawlush, before he made his final move in the race's final 100 meters and overtook the lead.

"It was a really cheap move by me to pass Derek in those last few steps," Gruschow admitted.

But controlling a race from the position of second? He actually prefers that to his more traditional move, where he burns out the pack and then ends up running by himself.

"That's kind of why I love running in second," he said. "You can control the race and you know what's going on. Last night in the two mile, I was looking back a lot. I was just checking to make sure I was OK. I didn't want to be in the last 50 meters and someone running by me. I wanted a chance to react."

So he had to earn that fourth medal; he sort of had to steal it in away, too, but Pawlush couldn't have been that mad.

His 3,200-meter relay team had won gold in 2010, but personally in that same year, he was second in the mile and third in the two-mile.

A chance at history was staring him in the face.

"It would be special," he said right before he won the 800, completing his four-medal day. "I don't know when the last time it was when someone won four golds at districts. It'd be quite an accomplishment."

To be even in the conversation, though, Gruschow had to work.

The outdoor District 3 and PIAA Class AA cross country champion made a decision that opened up his winter.

He gave up basketball over senior year -- he had played until he was a junior -- and decided to focus on running.

"The coaches tried to train him, and everyone else, so that their peak fitness is right now and over this time," said Oszustowicz, who first started working with the harrier in the fourth grade.

"We take them out in different events over the regular season in anticipation of this. We monitor them, our training schedule, so that he should be as fit now as he'll ever be. And he should be well prepared. And he is."

There's an obvious speed disparity between all three.

Turns out, the rest of the state will likely get a chance to see Gruschow's true speed in action.

According to Brownyard, the Trinity 1,600 relay team, which won the Class AA race in 3:25.52 without Gruschow on Saturday, will fill their lineup with the senior next week in the hopes of trying to win the event.

And only really until then may you choose to believe.

"You can really put him anywhere," Oszustowicz said. 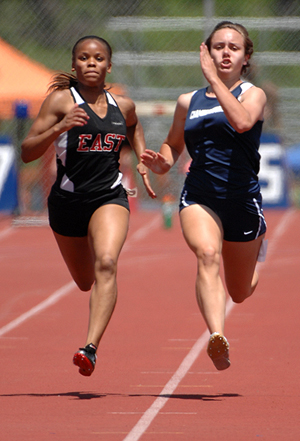 She beat Central Dauphin East's Deme'shia Davis for the second straight week in the 100-meter dash, scoring a time of 12.23 at the District 3 Class AAA Championships. Davis came in at 12.24.

"It definitely was close," she said. "I could see her out of my peripheral vision. But luckily at the end I was able to pull through in the end."

What helps Whitmore the most, it seems, is at the halfway point, when her top speed seems to go from gear 4 to gear 5.

She won bronze in the 100 as a freshman at the PIAA Class AAA meet and was a fourth-place finisher a year ago. This season, she plans for better results. She feels her conference, a challenging Mid-Penn, will help her get there.

And so where did it all start? Where did Whitmore, about 5-foot-5, learn how to sprint? Where did you develop the curiosity that continues to guide her through her track career?

Turns out, she was proactive.

"We have a junior high track program that I started in 7th grade," Whitmore said. "It started out just for fun, to give you something to do. But it's turned into a lot more."

With a little help from Chambersburg junior.