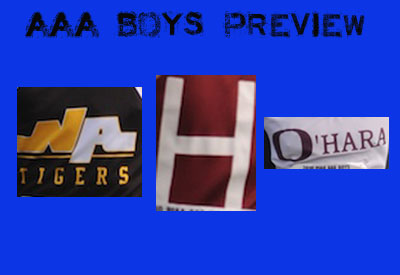 2011 could be shaping up to see a rematch of the 2010 championship between the top two teams. Last season, North Allegheny overcame many years of close calls and bad breaks, along with injuries to their captain and state champion Ryan Gil to finally bring home the team championship. This season, they will take on what some would say is one of the tougher challenges in sports: repeating as champions. They do bring back their 2-6 runners from the championship team, including 13th place finisher Logan Steiner. Steiner was 9th in the 3200 meter run but ran 9:24 in his district meet. Projected number 2 Vincent Tonzo was an 800 meter finalist last spring. But if the district 7 powerhouse is to win again, they may have to beat the same squad they beat last year for a 2nd straight year.

District 1 champion West Chester Henderson looked to repeat as champions last year but had to settle for 2nd place. Even though they graduate their top three runners from last year, Henderson has a reputation of producing amazing runners year in and year out. District 1 teams know that they will be in the hunt once again this year. Last year's 3rd place team, Cardinal O'Hara, became the first team not named Lasalle to have the best finish out of District 12 at states. They bring back five from last year's team that had the best 1-5 spread in the state. They had a 20 second spread to win their county championship with a record score. A similar performance may get them to the very top of PA in 2011. Great Valley brings back their top four, with their number one, Ned Willig having one of the better track seasons in PA last season. Their qualification for states last year surprised many. This year they will have many eyes watching their performances. They had two freshman step up the the varsity last year, including #2 man Matt Willig. North Penn brings back their entire top five, while Mount Lebanon brings back six of their top seven, the most out of any top ten team, including senior Alex Moran. Baldwin will also be in the District 7 and state mix with Bobby Bishop leading that charge.

With only seven state medalists coming back from last year's state championship, 2011 will be an opportunity for some new faces to put themselves at the top of the state. Sam Hibbs of Hatboro-Horsham comes into this season as the top returner with his 7th place finish. Hibbs is also the only returner to have a personal best under 15:30 and he has a 3200 meter state medal. Many fans will be anticipating what Drew Magaha of Upper Moreland will do to start his senior year. He electrified Shippensburg last season with his state meet record 4:07.32 1600 meter win and he ran 1:52 in the 800 as well. Logan Steiner of North Allegheny was 13th last year and will look to duplicate what former teammate Ryan Gil did last year. Alex Moran of Mount Lebanon was 14th a year ago and medaled in the 1600 and has a 4:14 personal best and a 15:41 from last year. Quinn Devlin of Downingtown West put up some great track numbers last year and will look to earn his first state medal. Ned Willig of Great Valley will also look to use the big breakout track season he had a year ago to make him a big player in cross country.