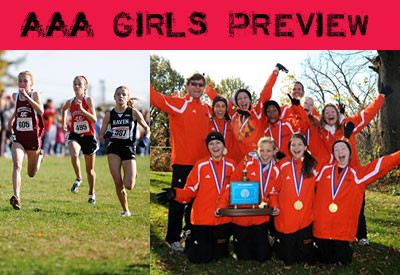 Pennsbury ran a very tough invitational schedule, running in every big meet they could find. In every invitational last season they finished either first or 2nd, with Tatnall (DE) being the only team to defeat them at any of those meets. Pennsbury was undefeated in PA in 2010 and bring back five from that championship squad that will be led once again by Sara Sargent and Ann Herman. Both are returning medalists and those two as strong frontrunners give them a chance of repeating. As the defending champions, they will take everyone's best shot, with many of the contending teams closing the gap that Pennsbury had over the state last season.

West Chester Henderson ended the track season on the highest of notes with their 8:55.43 state record 4x800 meter relay victory. They were also pretty good during cross country, finishing 2nd at states. They also return five of their varsity runners, but this year, some of those runners are coming off breakthrough spring seasons, and that will ultimately make them very strong title contenders. Janie Augustyn (9th at states in 2010), Amanda Eiseman, and Michelle Tracy will lead this group. Look for the confidence Tracy gained in track to translate to the grass.

North Allegheny is one of the three top ten teams from 2010 to graduate 3 of their top seven. North Allegheny's calling card last year was having the best 1-5 spread in the state. They did have spreads under 30 seconds on three separate occasions. Similar results will put them in the mix once again. State College managed a 4th place finish with their top runner not even running the entire year. That entire group comes back this year led by three seniors and coming off a team title in track. They will also have a good 1-5 spread that will make them dangerous when it counts. Downingtown East finished 5th a year ago and return two medalists in Katelyn Callaghan (17th last year) and Biz Weiler (19th).

The title race will also include squads that didn't even qualify for the meet last year. Boyertown brings back two girls with sub 19 minute personal bests and five with personal bests under 20. North Penn was the first team out of the state meet in district one, missing qualification by four points. But with a star like Meghan McGovern leading the charge (5th last year), they will be back in the mix come November. Haverford Township brings back their top four from a year ago that were considered a strong candidate to qualify in 2010. They will certainly be in the picture this year after having strong track seasons from the sister duo of Sophia and Tess Meehan. After great 4x800 success last year, Central Bucks West will look to carry that momentum into cross country after finishing 8th in district one.

The list of talented individuals in AAA continues to get better and better every year. Nine of the top eleven come back with most of them coming off of phenomenal track seasons. Sargent will be looking to regain the state crown after finishing 6th a year ago. If she returns to the form of 2009-2010 when completely healthy (no mono), and when she won three state titles, she will have a great chance of regaining gold. Paige Stoner of Pottsville Area was the runner up a year ago and finished her freshman year with some strong personal bests on the track, running 5:03 and 10:54 last season. Hannah Grossman of Strath Haven used the state meet as her breakout race, finishing 3rd. She also had a great track season as the anchor of the indoor state record 4x800 meter relay team (2:14 personal best) and medaling in the 1600 for the 2nd year in a row. The Malone sisters Margo (1600 meter champion and 4:55 personal best), Shannon (3200 meter medalist), and Mary (1600 meter finalist) of North Hills will look to duplicate what the North Hills boys trio of Joe Kush, Zach Hebda, and Juris Silenieks and become the talk of the state with strong performances. 3200 meter champion Tori Gerlach of Pennridge won district one last year and was the leader with one mile to go in the state race, but finished 11th. She will be a big part of the depth that district one will bring into the 2011 season.