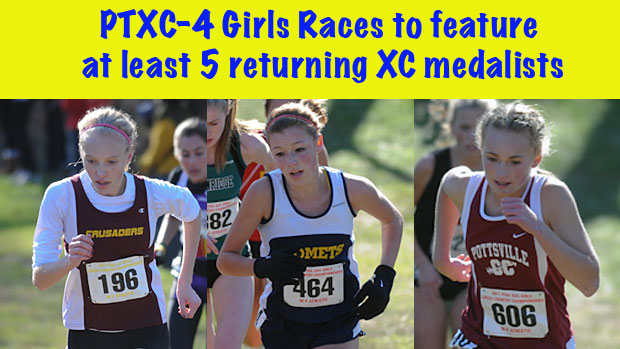 This year's PTXC-4 - set for Saturday September 8th at the Farm Course at Kutztown University - will be featuring at least five returning state cross country medalists in the Girls Gold Race. The mid-summer entrants include rising juniors Kennedy Weisner, Elk County Catholic, Penn Manor's Greta Lindsley, and Pottsville's Paige Stoner. Weisner was runner-up to Angel Piccirillo in AA XC, and outdoor in both the 1600 and 800. She went on to earn all-American status at this summer's New Balance Outdoor Nationals. In addition to her XC medal, Lindsley earned a PIAA medal in outdoor in the 1600. And Stoner earned a 5th place medal in the 3200 in outdoors to go with her XC medal. Returning senior Catie Skinner of Penn Charter is the 2nd returning finisher from PTXC-3, and a former PA Independent League champ and runner-up.

Once again, we'll be doing video of each race from the front with a gator... and have great awards, music and food.

This year's meet headquarters has moved to the Hampton Inn on Route 100 near I-78, with a great special rate of just $89 for up to four, and includes a hot breakfast. Go to: www.hamptoninnallentownpa.com When prompted, enter the Group Code PT4 for the special rate.