Palmyra senior Tim Moses was beaming a big "I finally did it" smile on Friday night at the Lebanon Valley College Indoor Invitational. He had just PRed with a huge clearance of 16', becoming the first Pennsylvania pole vaulter over the magic height since Eric Sparks of Hickory accomplished the feat at the Nike Indoor Nationals in 2005.

Moses was just in 5th grade at the time, still two years away from being introduced to the event by his father.

If he continues his improvement, he'll be showing his pearly whites a lot more during his senior year. So it's a good thing he comes from a family of dentists/orthodontists - including his father, his uncle, and two of his cousins.

Even better for Tim is, he comes from a family of pole vaulters with a lot of PA history.

His father, Terry, is his coach, and vaulted at Cedar Cliff with a PR of 12' 3". He was the 1969 District 3 AAA champ and held the school record for a year. He competed at states, clearing 12', but with only three medals awarded, did not place. His eventual PR was 14' at West Chester State College (that's what the PA state schools were called back in the day).

Tim's uncle, Richard, had graduated from Cedar Cliff five years earlier with a PR of 11' 6".

Tim's oldest cousin, Richard III, had a high school PR of 13' 7 at Palmyra, a record that stood for three years after he graduated in 1995.

Tim's youngest cousin, James, graduated from Palmyra in 2000 with a PR of 14', but never got the school record held by his older brother Joseph, who cleared 14' 6" and was the District III champ in 1998. 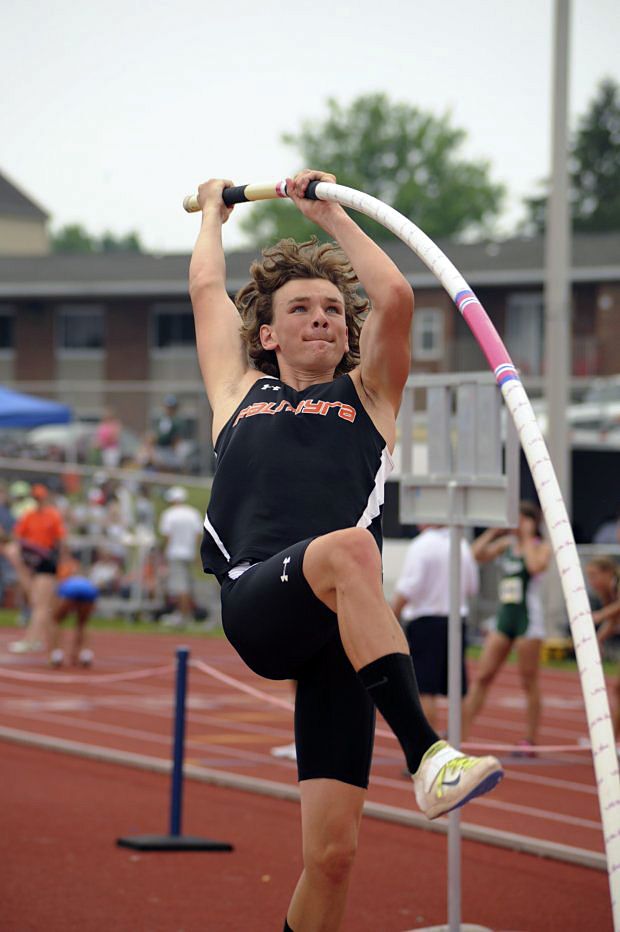 As for the family PR, Tim tied it as a junior in mid-February, and then matched it at the indoor state meet in late February. He then broke it by clearing 14' 9" at the Mid-Penn Conference champs in mid-May, and put it even further out of reach with his 15' effort at the outdoor state meet Memorial Day Weekend. He would finish 6th and earn a medal in both state meets.

"It didn't completely surprise me. I cleared 15' 8.5" at a Halloween meet at Vaultworx (an indoor facility near his home). I was hoping I'd get it last Friday night."

Moses' night didn't start off as well as he would have liked. He missed the bar on his first attempt at 13' 6". But his experience told him that his warm-up wasn't exactly perfect. The 150 lb 6-footer always uses a 15' pole, varying the weight rating from 160 right through 175.

"My father and I debated the next height and decided to go for the 16'."

His 2nd attempt at the height was very close, just nicking the standard. But the student of the sport he is, Moses knew exactly what changes to make, and moved his hands back on the pole, added three inches to his approach, and then ran hard. "The rest is history."

He got a good look on his 2nd attempt at 16' 3", but after all the jumps was getting tired.

Moses knows the risks of his sport. He is cautious with the placement of the standards. "I don't like unsafe vaulting."
And his father never lets him practice alone. "Oh yeah, I am scared on every vault. But I know I am prepared."

Is it talent? Absolutely. Speed and a good feel for moving in space are gifts that very critical to success in the event.

Is it coaching? Yes again. Not only is his father knowledgeable. He cares for his athlete's safety like, well, a father would.

But with Tim, it really comes down to work ethic.

In fact, he hasn't missed a day of work in three years.

"The thrill of working to achieve something and then going out and doing it is worth the effort. If I work incredibly hard, I can achieve my goals."

Walking the talk, Tim doesn't miss school. He eats healthy. And he stays focused on his goals.

His philosophy is succinct.

"All that needs to be done in order for anyone to succeed in pole vaulting is to practice the vault itself on a regular basis, in addition to exercise.  Everyone has their own ideas as to the correct way to practice, how much to exercise, and ultimately, what will get you the highest.  What you need to do as an athlete is listen to everyone's ideas and combine them to form a unique method that works for you."

Or more directly, "I just wanted to do what my cousins did."

Tim will next compete at the Dickinson indoor meet on December 15th, again at Dickinson on January 12th, and is thinking about Kutztown on January 18th.

His ultimate goal is an indoor state title and continued success outdoor, including competing at the Penn Relays Carnival.

"Well, it's far fetched, but I've always loved watching movies, and my dream has always been to become a movie director.  If that doesn't pan out, dentistry is a close second choice!  : )"