Five PIAA records graced a cold, damp and gray day, all in the Field. Justin Clickett, the Union City senior, threw a 62+ throw, and just five minutes later, blasted past the last marker for a PIAA AA record of 64-05.75. Just ten minutes before Clickett's record toss, Williamsport's Ruby Radocajuncorked a 156-08 PIAA AAA record in the AAA Javelin. And earlier in the day, the boys' AA saw a new mark with Osayi Osunde, a Central Columbiia sophomore, throwing 195-07. John Wormuth of Lakeland was 2nd with a 192-03. And two records were recorded in the 200 Preliminaries, one by Andre Broussard, Elmer L. Meyers (AA 200), and Krista Simpkins, Wissahickon (AAA 200).Broussard ran 21.80, and Simpkins ran 23.77. (No one would run faster the rest of the meet, and both beat the existing records.)

Meanwhile back at the Triple Jump pit, Norristown senior Michael Whitehead, spurred on by the competitive challenge of Hickory's Dante Marshall, and empowered by a evening of prayer, "jumped the best of his life" as he exceeded 49' in the Trials three times, the last a 49-08 effort.

It was all prelims on the track. Top seeds in the 4x800's took care of business as Gwynedd Mercy(AA 9:29.61), and Haverford cruised to a 9:20.90. For the guys, North Penn looked comfortable with their 7:52.04. In the sprints, Kandance Ferguson (Milton Hershey), and Jannea Bridgeford(Upper Darby), looked strong in AA and AAA 100 action. Ferguson also topped the 200 field in 25.38. In AAA, super soph Krista Simpkins did anything but relax as she went 23.77 to pull away from a talented field. In the other heat, Elyse Goode, Ambridge, went 25.07, while Tiffany Abney, Merion Mercy, still nagged by a tweaked hamstring, was 3rd in 25.16.

In other finals action, Steve Ekema-Agbaw, Bloomsburg, won the AA Triple Jump (45-05.00); while William Penn (Harrisburg) Sophomore Knowledge Timmons went 10.82. Abney was the class of her specialty, the 300 Hurdles, in 43.51. Bradford's Shawn Colligan was the top performer in 37.85.Abney returned in the 400 to easily outdistance her competition in 55.56. Oxford senior DrewEckman went 48.21 to qualify ahead of the field.

In the 800, Warwick senior Ganne Way ran 2:13.89. The fastest time of the boys prelims came from Eastern York senior Tom Devine in 1:56.48, but Mark Korich, Springfield Montco, was totally in control of his 1:57.69 win, conserving energy for the 1600 final on Saturday.

Lewisburg senior Ashleigh Wetzel kept control of her race with a 5:04.92. But it was Freedom sophomore Lauretta Dezubay who posted the best time of the day, a 4:58.84. For the boys, Forest Hills' Jacob Strayer and Korich won their heat in the 4:24 range; while District 1 champ RyanShaver of Coatesville, Henderson junior Greg Williams, Manheim Township freshman Craig Miller, and Quakertown senior Adam Breisch all went under 4:20.

In the relays Upper Darby delivered a strong message with their 47.51 heat win, while North Penn is the class of AAA with a 42.55. In the 4x400's, Gwynedd Mercy, Wissahickon, Lakeland andNorth Penn were each the best of AAA and AA girls, and AAA boys.

Table of Winners with links to Heat Sheets, Complete Results & Photos BY EVENT 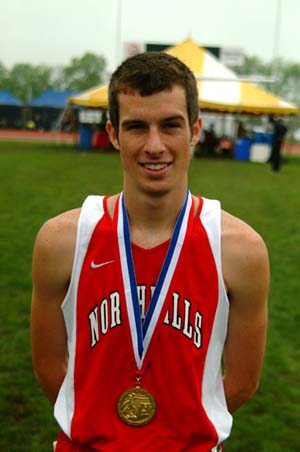 The rain held off much of Friday. Then it poured overnight. But at 8:59 AM Saturday morning, the rain suddenly stopped.  No wind. Cool. A great day for almost everyone (sprinters would have liked it a bit warmer). And the athletes did not disappoint.

It started fast and got better, with three more PIAA Records for the day, after three went down Friday.Gwynedd Mercy set the tone with a PIAA AA record (and fastest of the day) in the 4x800, going 9:07.82. It was just a  few  seconds off their  Penn Relays time,  but in this race they were alone. ThomasJordan, Cedar Crest, set a AAA Javelin Record with a huge 224-02 throw (now he is US#1). Jordan said he used the brief tie for US#1  as motivation. BradZimmerman, Warwick, 2nd in 209-02. And another  Javelin record bit the mud as Bald Eagle Area's Angela Hoover threw 154-05 for the PIAA AA Record. That means all four Javelin compeitions produced new PIAA records.

Hatboro-Horsham kept it close the first three legs, and  then handed off to Caitlin Klaas, the tough sophomore, who proceeded to make up 30 meters and more while posting a three second PR, splitting 2:10+ for a time of 9:10.52. Favored Haverford Township ran within a second of their season best of 9:13.90, but had to settle for second in 9:14.48. Haverford loses only one, and has a rising junior to fill the need.

(sorry,I was at the indoor pole vault when most of the team trophies were handed out)

In AA, it was Bethlehem Catholic. 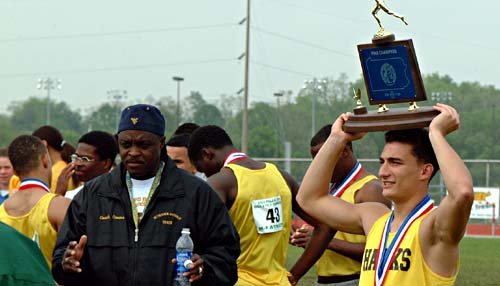