"Most won't try Pole Vaulting
because they're afraid of failure,
or they think they might look bad. Not me."


This winter, as Hickory PA junior Andrew Rademacher continued his five-year pursuit of new heights in the Pole Vault, PennTrackXC talked with him about his sport, his progression, his training techniques and mental approach, and his short, and long-term goals. 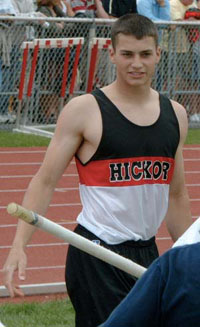 Rademacher feels safe in the sport because he feels confident. In his coaches, his preparation, his equipment and his belief that he must always stay within his abilities. And he's finishing the end of a five year plan that has him right on track to reach his high school goal of clearing 17' 03" (recently upped to 17' 6) as a senior in the spring of 2004. And that's probably one of the biggest reasons he has steadily improved since getting interested in the sport in the 7th grade. Planning.

Discovered by a former State Champion.

It all starts with a passion. Andrew was watching the Pole Vault one day while in middle school. "It looked like fun. I like jumping and sprinting, and the feeling of falling from heights. Vaulting combines all of that." And it fit his taste for extreme sports. "Not that the Pole Vault is extreme. You have to have the right coach."

His coach happens to be a former PA state champion. Tom Hale vaulted for Hickory in the early 90's. Hale's PR came at the District 10 meet in 1992 when he cleared 14' 6.50. His 14' 0 jump in AA at States that year would win the championship. Hale was the coach who he first met when he started in 7th grade. It also helped that Andrew's father, John, got just as interested in the event as his son, reading books and attending clinics. He and Hale are now Andrew's coaches.

Below: 1992 AA State Champ Tom Hale, who competed for Hickory,
Andrew Rademacher, and father and coach John Rademacher,
at a Slippery Rock meet in January. 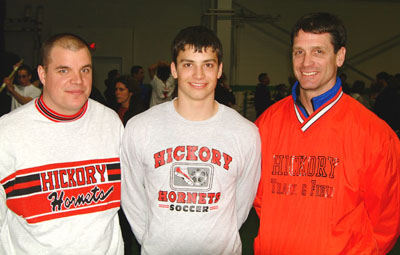 A rising career from the start.

It also helps to be competitive. The first day of 7th grade practice, Andrew watched as a fellow middle schooler cleared 6' 6. Andrew's first height was 6' 0. With just two days of practice, he cleared 6' 6. By the next spring, Andrew was ready to get started trying for new heights, arriving for practice before the team. Within a few days, he was clearing 8' 0. His dad read more books. They attending the "Learn-by-doing" camp at Slippery Rock. That summer he qualified for AAU Nationals, clearing 10' 0 at the county meet, 11'0 at the AAU Regional Meet @ Slippery Rock and eventually took 11th place in Nationals with a jump of 11' 6. He was 14, but competing in the 15-16 age group. A foot-and-a-half improvement from the spring to the summer only inspired him to go even higher. 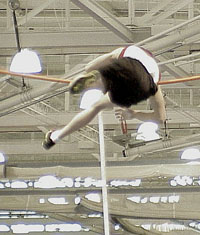 Welcome to high school. The indoor 2001 season would be the only time Andrew would not medal at a PA state meet. He would clear 12' 9 for a PR and season best at an earlier meet. It was outdoor that the major progression continued. His 14' 0 effort at States would tie him for 5th and put him in a club he had looked to join for three years. During summer competitions, he would up that PR another 3" to 14' 3.

Back to training, and a fall of preparation for his sophomore Indoor season. His best effort that season would see him add another foot to his PR. The jump at Ohio State University came on February 23, 2002, a little over a month after he had cleared 15' 0 for the first time in a TSTCA meet at Robert Morris University. He would win his first state championship that season (in photo at right, March, 2002), clearing 14' 6. Andrew's outdoor campaign as a sophomore would see him clear 15' 0 seven more times on his way to another PR of 15' 5 at District 10 Championships on May 15. He matched the height at the adidas Outdoor Championships, an effort would get him into a four-way tie for 3rd. He cleared 14' 6 @ States, getting 3rd.

As his junior year Indoor season finishes, Andrew has tripled his production of 15' 0 vaults as compared to the 2002 Indoor campaign, clearing a season high and new PR of 15-09 February 1st at the Virginia Tech High School Indoor meet. Just a few weeks earlier, he had cleared 15' 7 for the first time at Kent State University in Ohio. 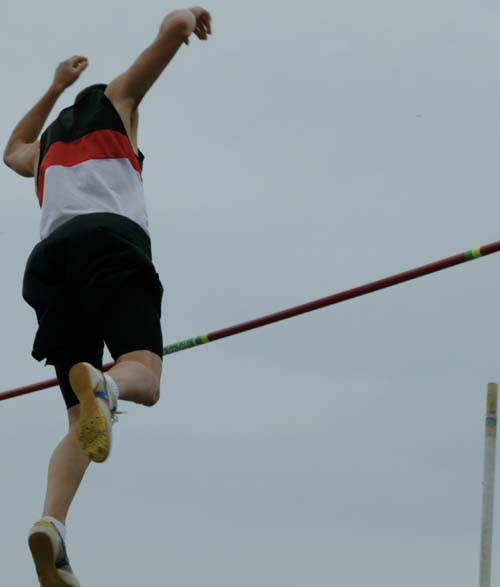 attempt at 15' 11 at Kent State when after his hips cleared the bar, "I got too anxious and my chest hit." Anxiousness wasn't the critique when he nearly cleared a PA State Indoor Record 16' 1 at the PTFCA Indoor Championships March 1 at Penn State University. "I'm not used to being so close to the bar, so I have to learn how to adjust my body to finish the jump cleanly." Once again, his hips were over, but he caught the bar with his arms on the way down. "16' 0 is there. It's just a matter of time. I want to get over 16' 0 at the Nike Indoor Classic. It's something I have been planning since 9th grade."

"You have to be kind of fearless to do this."

In other words, you can't be shy about jumping. According to Andrew, the key to any successful jump is "no lollygaging into the plant." Which probably is putting it mildly. Andrew feels that upper body strength is not as important as many believe. "You have to be able to jump off one foot at high speed, like the High Jump. Some people just can't jump on the run." He also believes that spatial awareness, such as that possessed by gymnasts, is more critical. "You can't be scared of being upside down." Again, an understatement. Which reveals something more about the mentality of the pole vaulter. They are brave. But they are also unfazed by distractions.

"Mentally, you can't get down on yourself. You have to expect ups and downs (pun may have been intended), and plateaus. And your concentration level has to be extraordinarily high. You have to give an all-out effort on every jump. Consistency is key. Which means routine is important." Andrew begins each vault by chalking his hands, rocking back twice on his foot, and getting into a rhythm. And he stays relaxed by messing around with teammates and others. "During competition, thinking only about vaulting can hurt you. That's what I did last year at outdoor States, and I only cleared 14' 6." (still medaling, but falling short of his season-best 15' 5 from the District 10 meet the week before). 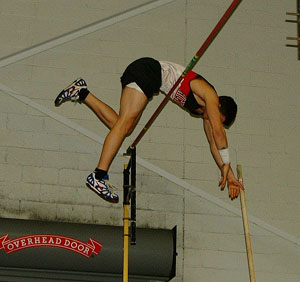 "Pole vaulting is like a small club. Everyone is so helpful."

Andrew is impressed by more than the skills of his sport's best. They impress him as people. "I met Tim Mack and we talked for 20 minutes. He told me about gymnastic routines and his ideas on different vaulting techniques." Andrew also believes that Pole Vaulters have a sense for entertaining. "Mack does a dance. Toby Stevenson is great too. These guys look at the crowd. They aren't afraid to ask them to clap. And they don't get too down when they miss. After a 3rd miss, they always thank the crowd. That's how I want to be seen." What's more, he has seen many of the best readily offer advice when asked. Now he does the same. "It helps the sport."

"I use cross training to improve my techniques and stay fresh."

Andrew uses many of the training methods suggested for Pole Vaulters. Each contributes something to conditioning or technique. He thinks the Pentathlon is the best all-around preparedness for both training goals. "The three-step final approach to the High Jump helps you to stretch your stride, the same as the Pole Vault. The Long Jump is the same run and take-off (18 strides with two walk steps). The Shot Put helps strength and explosiveness. The 1500 for endurance. And the Hurdles for flexibility." He also uses a lot of plyometrics, which he feels are better than weights because you can get the benefit of resistance, yet do the training in a faster motion than lifting. Andrew will add the 400 this spring for speed, along with some shorter sprints. His hurdles have been improving. He was 8th at Districts last year in the 110, and was 3rd in the 55 Hurdles this indoors season at the TSTCA Championships in 8.0. He even ran Cross Country in 7th grade.

This summer he wants to try the Decathlon. He has done gymnastics and yoga. He takes a break from vaulting in the fall, playing soccer, and doing endurance running. "Just for myself. Certainly not to impress anyone." 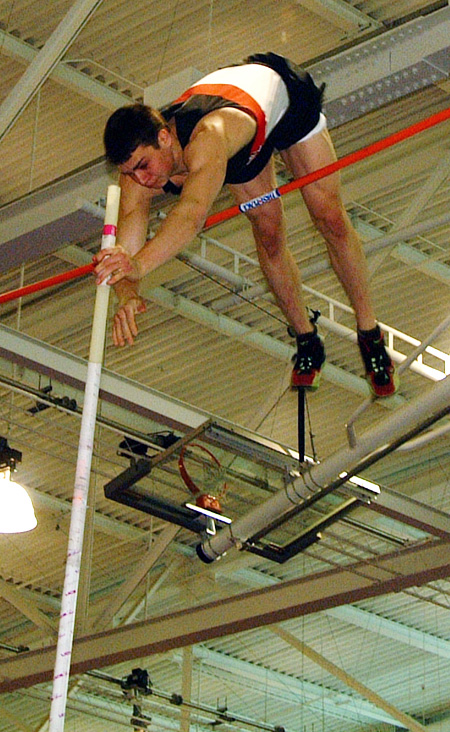 The self discipline translates to the classroom, as well.

Preparing for the Pole Vault sounds like a lot of work, and it is. 15 to 18 hours a week. But those who know Track & Field athletes also know that their self discipline and motivation also permeate other parts of their lives. Andrew has 1250 on his PSATs, and last year had a GPA of 3.94. He is also taking one AP class this year.

While the college possibilities are open, he has always wanted to go west and compete for a Division I school. Two that have piqued his interest are Stanford and the Air Force Academy. "It will help if they have a good Pole Vault team, but the focus has to be on academics."

While his indoor goal of 16' is within reach, he already has set a 2003 spring outdoor goal of 16' 9, hoping to hit 17' 3 to 17' 6 by the end of his senior season. For now, he is happy to stay with the 15' pole. That fits his philosophy of staying within his abilities. He feels a helmet gives a false sense of security and that knowing his limitations of equipment, training and mental preparedness are more critical for safety. "Staying with the 15' pole will help me improve my technique. When I get outdoor, I will practice takeoff after takeoff, and only then go up to the 16' pole."

"I'll be going to the Nike Indoor Classic on March 15-16. Then outdoors, I'll be competing at Baldwin, the Penn Relays (11th in 2002 on a windy day), the McDowell Invitational, States, Nationals, and hopefully the Junior Nationals. I need 16' 2 to qualify for that. If I receive an invitation, I'd also like to compete at the Golden West Invitational two days after the adidas Pole Vault competition."

With ups and downs that require an athlete to stay level-headed, vaulting is a sport that prepares its participants for the life. 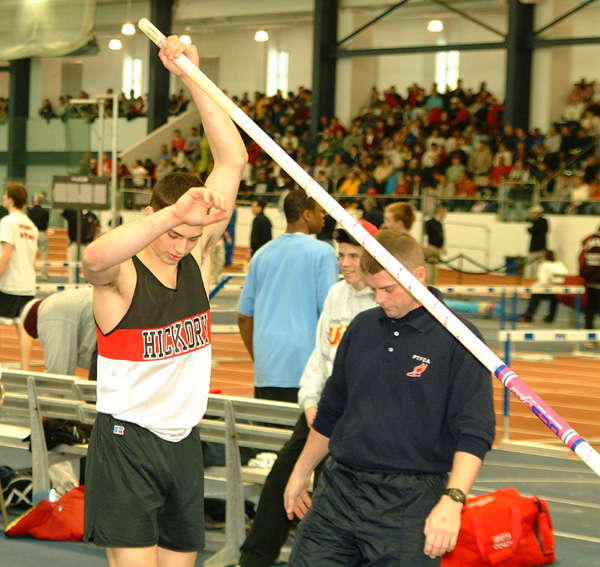 "Vaulting has opened up the real world for me. I now realize I can achieve more than I thought I could. I can apply that to anything. More than anything, it teaches you to take risks, and to prepare for those risks." Another real world truth that Andrew has experienced is meeting the expectations of others. He was told a freshman couldn't do 14' 0. He heard that people would be surprised if he reached 15' 0 as a sophomore. "They're saying I can't make 16' 0 as a junior. And that 17' 0 is out of reach of a high schooler. Well, there were 17' 0 jumpers last year and this." "This has taught me that I can always achieve more than I think I can, and to set and pursue my own expectations. That's all I can control."

Right: Checking position after a jump. Consistency is key to success. Rademacher can generally hit his strides to within a half inch each time.