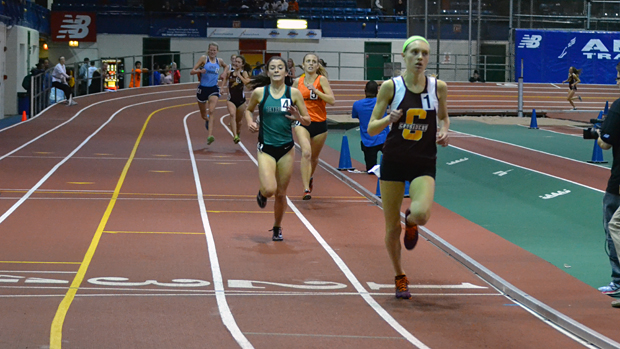 They went one-two-three in a big race at the Armory.

For the second year in a row, there is a very good chance that PA will be represented at the prestigious Millrose Games by three very talented milers - one a sophomore, one a junior,  and one a senior.

It's the senior who currently resides on the proverbial "bubble," awaiting the results of another auto-qualifying race on Saturday,  January 26th… or for an at-large invitation based on her times.

Earning auto-qualifying spots at this past week's (Jan 16) Millrose Games Trials at the New York Armory were the race winner, Kennedy Weisner of Elk County Catholic (the junior), and Pennridge sophomore Marissa Sheva.

Significantly, if Pennsbury senior Sara Sargent either gets her auto-qualifier at the New Balance Games this coming Saturday, or gets the invitation - it will be her third Millrose Mile in her remarkable four-year high school career.

A Foot Locker finalist as a freshman; a state champion in one event or another each and every year of her career, and the leader of this year's three-time XC state championship team and eventual US#5 - Sargent knows a thing or two about big-time racing.

But a 200-meter track in an eight lap race invites problems.

For Sargent, it was not the greatest start. "I should have gone harder in the first 300, and couldn't see what lap we were on."

She was boxed in several times and says she even nearly came close to a literal stop to get out of the jams.

But experience helped her to keep from panicking, and she eventually found herself within striking distance of Sheva for 2nd.  With 200 to go, she hit the gas, but had admittedly "waited too long."

Her 4:55.87 was an indoor PR by almost two seconds and just under five seconds off her outdoor PR which was her state championship as a junior.  "It felt great and was awesome for my confidence."

Making a much bigger improvement was Weisner, who chopped over seven seconds off her indoor PR with her winning 4:54.18. That former PR earned her a 4th place medal at indoor states in 2012.

Lined up beside Sheva and Sargent at the start of the Trials,  Weisner had one focus. Get out fast.

Get out fast she did. In fact, she led from start to finish, coming through the quarter in 72, the half in 2:25 and closing in a 71.  "I had no idea where they (Sheva and others) were. I felt very comfortable the whole way, but did not know how close they were." 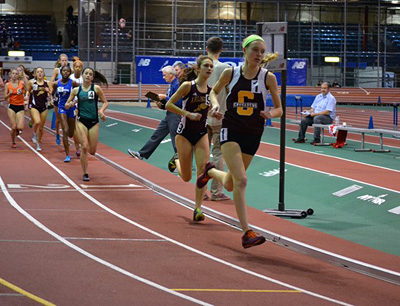 Sheva knew that Sargent would be in the race, but didn't know Weisner had signed on until she saw her at the Armory.

This was the race that she says she really needed. Sheva had finished a distant fourth at the early January Hispanic Games in the mile.  She had tried to earn a spot in 2012. "I only gave myself one shot last year,  but I knew I was a long-shot."

Sheva didn't get the start she had wanted, but by the 800 she was with Weisner and another competitor in good position.  With 70 meters to go she knew it was Sargent coming up on her, but held on for the runner-up spot in 4:54.90, an indoor PR by over six seconds on her 5th place time at states in 2012.

All three runners have some big goals and plans for the remainder of the season and year.

Weisner has received and accepted an invitation to the big Brooks PR meet in Seattle, Washington on February 24th, the day after the PTFCA Indoor Champs. She also has her eyes on at least the mile at the New Balance Nationals in mid-March, along with earning a repeat invitation to the Penn Relays Carnival Girls' Invitational Mile, where she was 5th in 2012.

Sheva definitely sees herself as a miler, now and for the foreseeable future. "I ran a 3K a few weeks ago," she says. "And I'm not a big fan."  So the mile is on her plate for states, and then either the DMR or 4x400, depending on the team configuration.  And she is all in for the mile at New Balance Nationals. 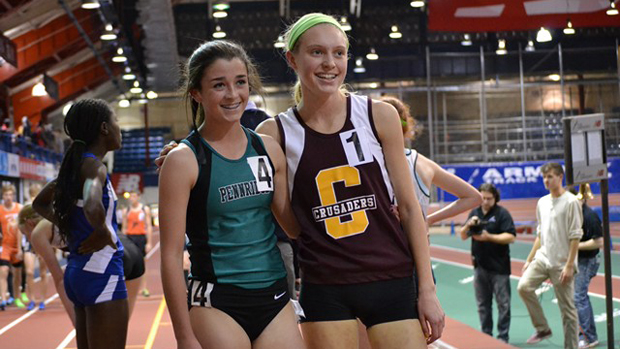 University of Virginia recruit Sargent has been invited to race in the New Balance Grand Prix elite mile on February 2nd in Boston, followed (hopefully) two weeks later by her second trip to the Armory for the Millrose Mile. "I miss the whole experience  of running (Millrose) at Madison Square Garden, but the Armory track is definitely better." Her plans for States include the 4x400 and the DMR, with anything individual dependent on team goals.

But any way you line them up - Weisner-Sheva-Sargent - PA is well-represented in the mile this year with three of the best milers in the country.