STATE COLLEGE -- When Lanae Newsome peers down the runway at the PTFCA Indoor State Championships at Penn State University on February 23rd and visualizes her first, third or even sixth attempt at the triple jump, there's a reasonable chance she won't be thinking of Marshay Ryan.

And quite the same is likely the mentality for Ryan, who has more important things to worry about, like the fact that she's competing within the indoor state format for the first time in her career.

That's not atypical for most athletes, least of all national-class ones. Focus should be tailor made toward their own efforts, not the competitors around them. Distractions can breed failure. And you only receive so many chances at any meet.

But it's an interesting connection, considering the two seniors, Chambersburg's Ryan and Brookville's Newsome, are the two best horizontal jumpers in the state and they don't even know each other.

Both Ryan and Newsome are set to square off at the indoor meet for the first time in their careers.

Making matters more compelling, Newsome holds the PA#1 mark in the long jump this year with a frame of 18-7, while Ryan stands at PA#2 with a leap of 18-0.

That's interesting for one reason. Newsome is long jumping for the first time in her career. 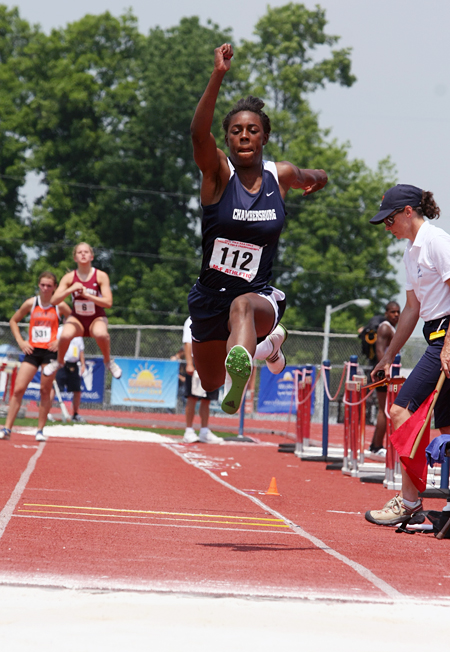 Meanwhile, Ryan, an accomplished jumper for the Trojans, owns two PIAA Class AAA state championships in the event over the last two seasons -- though she claimed a 19-5.5 mark in the long jump and a 42-2.75 result in the triple jump at the New Balance Outdoor Nationals in 2012.

It's all likely to make a compelling competition for the state meet in February. But you wouldn't guess it by speaking to either Ryan or Newsome.

It's because they haven't the slightest clue who either of them are.

"No, I don't know her," Ryan said of Newsome recently without much hesitation.

While talented in basketball and one of the team's leading players, Newsome's eventual athletic career lies elsewhere.

Over the indoor season, she maintains the Raider's top marks in the 60-meter dash, the long jump and the triple jump. Athletes such as Newsome come around only so often in a small town like Brookville, a small borough clinging to Jefferson County which sits 80 miles to the north of Pittsburgh and 160 miles to the east of Cleveland, OH.

The school, comfortably sitting in the PIAA Class AA designation for most sports, has secured only a handful of state champions over their athletic history.

In the last two years, Newsome has claimed three all by herself and has added another two state medals. As a sophomore, she leaped 38 feet, 3.5 inches in the triple jump, winning the PIAA Class AA title. 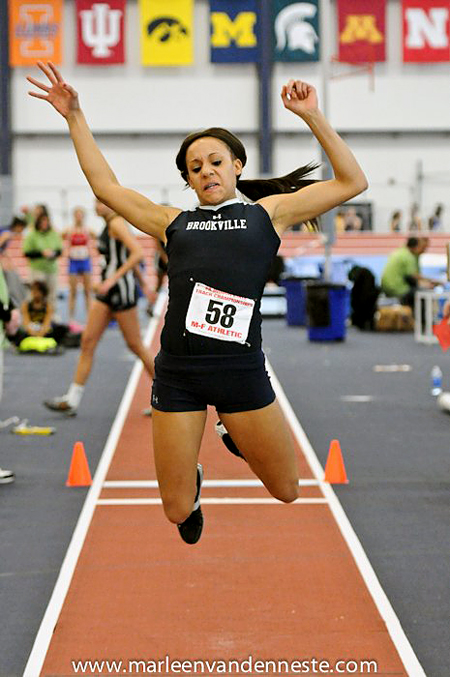 She added an indoor championship not nine months later, improving the mark to 38-7, before challenging that own result with a 40-3.5 landing at the outdoor state championships in the spring.

And to think, she hasn't even long jumped yet.

The situation exists for a lot of small schools with talented athletes. If an athlete is your best competitor in more than four events, exactly which four do you choose?

Do you pick the four which best suits the athlete in the future, or the four that will allow your team to score the most points without risking injury for the athlete?

Ultimately, Murdock said, Newsome has bided her time in the long jump for that reason alone.

"She could do horizontal jumps, three sprints and relays. But it's a matter of where she's going to be most successful and what she can train specifically for without risking injury."

So for those waiting, her time in the long jump is only just beginning.

Basketball was Ryan's first love. It was a passion she picked up as a youth and carried into her high school career.

Like Newsome, she is a combination guard that does a lot of the dirty work. She scoops up rebounds, blocks shots and plays tenacious defense.

Indoor track never really worked, because the timing wasn't right. Basketball was the priority. Track was a distant second.

But after the senior wowed college recruiters at the New Balance Outdoor National meet in June of 2012, scoring a first place finish in the triple jump  (40-3.5) and a second-place result in the long jump (19-5.5), that soon changed.

"It's probably the most excited I've been at a track meet for jumping in my career," Ryan said. "I went into the competition knowing not much about the meet or anyone else. I didn't know each jump was going to be that big."

"That weekend got the attention of every coach in the country," Ryan's jumping coach, Bob Walker, said. "That was her coming out party."

A number of schools threw scholarships at Ryan, and the Trojan athlete eventually chose Auburn University. While she remained a basketball player in the winter, she decided to give indoor track a try.

"That national meet got her excited about her future as a track and field athlete," Walker said.

With limited practice and a vague understanding of how indoors worked, Ryan still managed to qualify for the state meet at the Lebanon Valley Invitational in January, scoring a 18-0 mark in the long jump and a 37-11.5 in the triple jump.

She's competed in just two indoor meets so far, with another small meet planned in the future before states.

While the marks aren't near where her outdoor results were, Walker isn't too concerned. Ryan had less time to dedicate to her training this winter, and that's important because for New Balance alone, she committed three weeks of training on each focus.

With a little less than three weeks before indoors, Ryan will have adequate time to train with Walker again.

"That's what I think is so exciting for Auburn as far as what they're getting," Walker said. "She's  never really focused solely on jumping. She's always had to do other things. But those three weeks can show what can happen."

While Newsome picked up the long jump recently, Ryan only picked up the triple jump as a junior. That was mostly due to the physicality of the event itself, Walker said.

"Her performance has far exceeded what I thought she could do," Walker said of the triple jump. "She was jumping 37-feet right away. And in the conference championships, she hit 40 feet."

For those waiting, Ryan's potential in the triple jump is just beginning, too.

Newsome and Ryan are separated by 160 miles of highway and are resigned to two different classifications.

But for one day in February, the indoor meet at Penn State will bring these two athletes together for the first time in their careers as they fight for two more state championships.

They are more alike than they realize.

Who's expected to win? It's guesswork at best.

"If she gets six jumps, hopefully she can get at least one good one out of six and fight for a state championship," Murdock said of Newsome.

"I'm pretty competitive,"  Ryan added. "As long as I stay focused and listen to my coaches and do what I can, I'll be fine."

Neither will extend much of a second glance to each other, as the focus will be on their own efforts and their own concentration.

But as they prepare for their time on the runaway, a measure of respect will inevitably be extended, if only by the crowd itself.

The competition may not be close. It may far exceed what anyone expects.

But chances are, there will be a moment when the spectators at Penn State halt for a few seconds and begin to see briefly into each of these athlete's worlds.