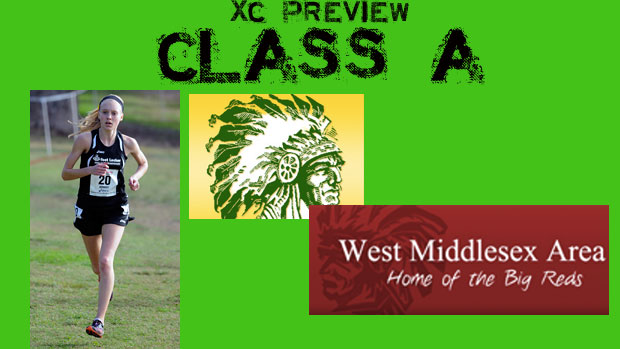 2013 Class A Girls Preview:
Weisner head of the class.
Team races will have familiar faces.

Four of the top five teams in the inaugural 2012 Class A state championship meet return squads that can duplicate or improve their respective finishes. Elk Lake enters the 2013 season with their top three finishers from last year's state championship winning team. Jenny VanEtten (4th) and Elizabeth Trowbridge (13th) earned state medals while Kenzie Jones scored inside the top 20 team places. Spots 4-7 have moved on, which makes the back end of their varsity team something to watch throughout the season.

Central Cambria graduates the 2012 Class A runner up Alyssa Brandis but will bring back three of their top five who were members of the 4x800 meter relay team that finished 6th in AA. New Hope Solebury returns six of their top seven including District 1 champion Alexa Botelho who snagged the last medal in the state race last season (25th). The District 1 squad will have three seniors to help push them into the championship contention.

Finally, Elk County Catholic was 4th a year ago and are led by Foot Locker Finalist and defending champion Kennedy Weiser. Teammate Victoria Dippold finished 15th in the state final. Three more runners return to the squad. Will an extra year of experience for Weisner's teammates be enough to push for a team title?

Individually, fifteen of the top 25 from the 2012 state meet return, including the champion Weisner. Weisner was far and away the class of the division and this year should be more of the same. Weisner has the 3rd best time on the state course, but only held the course record of 18:29 for an hour. Three weeks later, she was the 10th and final runner to qualify for the Foot Locker Finals last season out of the Northeast region. Weisner had a strong track season and got two long awaited gold medals in the 1600 and 800 meter runs outdoors and ran in some of the big races in the country.

Jenny VanEtten and Kristen White will not only lead their teams towards team glory, but are the only other top ten finishers from 2012. Places 11-20 return nine including the Cambridge Springs duo of Olivia Mamula and Reilly Walsh (16th and 17th respectively). Elizabeth Trowbridge (13th) and Victoria Dippold (15th) are number 2 runners for their sqauds will look to move up and push for team glory.

Out of the 25 medalists from last year's state championship race, seventeen of them were seniors, which makes 2013 in Class A a chance to create some new stars. Champions Northeast Bradford graduated their top two runners, Sam Williams and Curt Jewett, but return the rest of the top five for their title defense. Williams and Jewett were big PA stars by the end of their careers, which will be big shoes for the remainder of the squad to fill.

Sagertown finished 3rd in 2012 and only graduates their top runner Hunter Johnson, who was 11th in the state final. Only two seniors will be on the top seven this season on an otherwise young team.

West Middlesex finished 6th in the state meet last year and bring back five of their top seven who all have personal bests under 18 minutes. Compression may be their strategy to get back into the title race in 2013.

The three other top five teams, Elk Lake, Oswayo Valley and Vincentian Academy, all graduated three seniors last season, which will make their climb back to the top five a little tougher. Mercyhurst Prep brings back one of the top five returners from last season in Sebastian Curtin and New Hope Solebury brings back five sub 18 minute runners from 2012.

Jeremy Parsons of Maplewood enters 2013 as the top returner from the state finals (5th). South Williamsport's Griffin Molino is the only other underclassmen inside the top ten from last year (8th). Greg Wagner of Jenkintown (14th) has the fastest 5000 meter time from last year's returning runners and will look to qualify his team for the first time. Matt Murray of Dunmore was the only freshmen in 2012 to medal at the state meet a year ago. A lot of graduation means PA fans will be learning some new names in 2013!