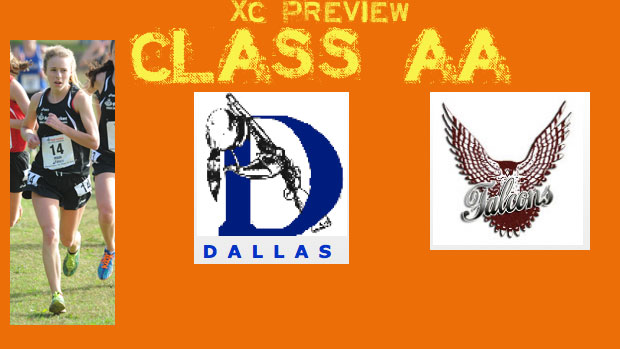 The realigned AA girls race last year was decided by 3 points. Despite a Regan Rome fall, she still scored 1 team point for the Dallas squad. But they were beaten out in the end by an up and coming Palmyra team by 3 points. Palmyra did the same thing in the AAA 4x800, surprising everyone to win the title on that day in May. Palmyra brings back four of their top seven to defend their title. With 3 seniors graduating, will they be able to surprise again? Dallas will be a big favorite once again with Foot Locker Finalist Rome leading the way. The top four on that day all get to come back for one more shot at state glory. Dallas will enter 2013 with three runners with personal best 5000 meter performances under 20 minutes, the only team in the division that can make that claim.

Villa Maria Academy from District 10 ran an impressive 4th place last year with three sophomores and two freshmen leading the way. Bernadette Prichard was a rising star in 2012, placing 12th in her first state meet. This group won their district last year and the AA girls 4x800 meter relay championship outdoors. They should have a newly found hunger to try to break into the top 3 in the division.

Danville finished 6th in 2012 but have the luxury of returning the entire state team back for 2013. Sophomore Mackenzie Jones had an impressive first year from start to finish, including an 11:05 3200 meter personal best. They also had a state qualifying 4x800 meter relay squad.

Archbishop Wood had the best pack running team not just in the division, but in the entire state. Their style of running helped them win several invitationals, including their league championship, and made them a contender for a state title last season. Their 7th place finish matched their best finish ever at a state championship, but this group will be prepared, and motivated, to challenge for the crown in 2013.

Individually, Regan Rome of Dallas returns as the favorite to get her first cross country state title. A slip up last year forced her to settle for 3rd, but an appearance at the Foot Locker Finals and after big personal bests in the indoor 3000 and outdoor 3200, Rome is set up for a big senior year.

Elizabeth Chikotas of Saucon Valley was 2nd at states last year, with graduated Adair Gennocro the only runner to beat her in both the cross country and AA 3200 meter state finals.

The Palmyra duo of Maria Tukis and Miranda Salvo finished 9-10 at states last year and were on the AAA winning 4x800 meter relay in May.

Bernadette Prichard of Villa Maria should have a strong 2nd season after picking up some invitational wins and some top tens in big races in her debut season.

Alexis O'Shea of West Allegheny finished in the top ten last year and ran a lifetime best of 5:03 in the 1600 meters last spring. Treicy Cedeno of Shikellamy finished in the top 15 last season and had many impressive performances on the track. Her younger sister should be joining the sqaud this fall and that should help her improve in her 2nd season. Jones of Danville and Regan's sister Ally, will all be in the mix for top ten medals in 2013.

Defending champions Pottsgrove will have a different look after graduating their top runners from their 96-99 win in the state final last year. However, they still return four of their top seven from a group that had the best 1-5 spread in the division and didn't have a single runner earn an individual medal. Pack running will help them have a shot at retaining the championship.

They now have new rivals in their district for 2013. Holy Ghost Prep will challenge them for the state title after qualifying in AAA two years ago. Christian Kardish will lead the squad and will have his own chance for a state individual title. Kardish has been one of the most consistent runners in the past couple of seasons.

Tunkhannock will have one of the more experienced teams in 2013, with three seniors who finished in the team's top four in last year's fourth place finish.

Scranton Prep has four of their top five returning with four juniors leading the way for the team in violet. South Fayette finished 10th in the state meet last year, and 2013 will be their best shot at a championship. The group will have all seven returning with six of them being seniors. On courses like Hershey, experience can be the difference between the top of the podium or just missing out.

Individually, the top ten and 14 of the top 15 finishers in 2012 have moved on to college running.

Dominic Deluca of Dallas was the only underclassmen in that group of runners (11th) and enters 2013 with a 3200 personal best of 9:13 and a top fifteen finish in the event at the state meet.

Christian Kardish of Holy Ghost Prep will be hot on Deluca's heels and has a 4:20 1600 season best from last season. Kyle Gonoude of Salisbury was 16th a year ago and won his league meet in the 1600 last year. Aaron Benka of Grove City (19th) will have to fill the big shoes left behind by state runner up Dan Jaskowak. Griffin Molino of South Williamsport and Simon Smith of Towanda enter 2013 with the 2nd and 3rd fastest times from 2012.