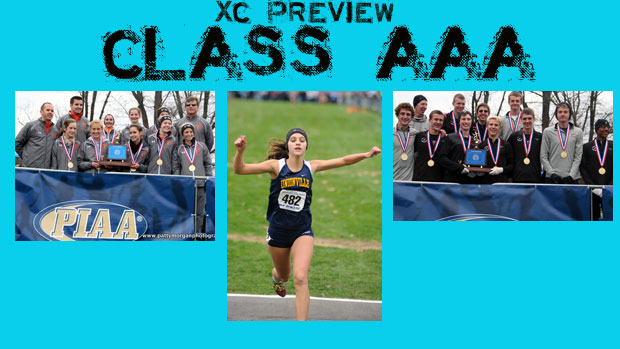 Unionville were the frontrunners for the 2012 season leading into the state championship final, only for Pennsbury to put together their best performance of the season and clinch their 3rd straight state title.

The leader of that pack, Sara Sargent, has left for the University of Virginia. She has not only left behind a great legacy, but she also leaves behind a team that has five of their top seven back from the 2012 championship and Nike Cross Nationals Northeast Regional champions. There's only one senior in that top five (Erica Gray), one junior, and three sophomores among that group. The champions will be challenged by runners up Unionville, who will not only be reaching for that illusive state championship, but for an opportunity to make it to the NXN Finals in Portland in December.

Defending state champion and state course record holder Courtney Smith is back to lead the squad in her final season. Smith is coming off a big track year where she ran the 2nd fastest indoor 3000 meter run in state history and also earned an All American certificate and an outdoor 3200 meter state title. Unionville also returns five runners and will hope that their blistering form that they showed up at the state meet can carry through the race and beyond.

Both squads will also look to represent PA at the NXN Team Nationals in Portland, Oregon on the first Saturday in December.

Germantown Friends will also look to join them in reaching that goal. The Tigers had a phenomenal track season, including an indoor All American performance in the 4x1 mile relay. Three runners on that relay were underclassmen, including Sarah Walker, who has opted to play soccer again this fall. But the Tigers are deep, nonetheless.

North Penn finished 6th at the state meet last season a year removed from Meghan McGovern's graduation. They return six of their top seven from a group that had the 3rd best 1-5 spread in the state finals a year ago. Qualifying without a veteran leader last year should help this team improve in 2013 after a year of valuable experience.

Mount Lebanon were the class of Western PA in 2012, earning a 5th place finish for their efforts. The 1-2 combination of Jillian Hunsberger and Kelsey Potts will be tough to compete against, and with five of the top six returning, the expectation will be to compete against the District 1 powerhouse squads.

The individual champion is back and Courtney Smith of Unionville will be tough to beat. Winning the title is hard enough, but repeating is a whole different challenge. The senior has risen to every challenge so far and her strong track season will be a great springboard for her title defense.

Junior Marissa Sheva of Pennridge finished 2nd to Smith at District 1 and the state finals. This time around, Sheva will put all her scholastic sports energy into cross country (instead of splitting time with soccer), which will make the 2013 indoor mile state champion an even tougher competitor looking for her first cross country gold medal.

Brianna Schwartz of Shaler Area was arguably one of the MVPs of the spring track season. The AAA 1600 meter champion had the fastest time in the event and finished 3rd in the state meet last year.

Mady Clahane of Cumberland Valley had a big freshman year, culminating in a 4th place finish at states. With a freshman year with very few hiccups, the sophomore will look to cement herself as one of the elite in the state.

Mary Malone of North Hills rounds out the top five of returning state medalists from 2012. Malone will look to achieve a family first and that's win a state gold medal. The leadership she has been able to work under from her two older sisters should help her have a great opportunity to achieve that goal.

2010 silver medalist Paige Stoner of Pottsville will look to win a medal for the 4th year in a row and her goal will be to make that medal a 1st place one.

After North Penn defeated Cardinal O'Hara for the 2011 AAA state title via tiebreaker, everyone believed that there was no way that could happen again. Despite a better performance from the whole squad in the 2012 final, a 69-69 score line still kept O'Hara from winning their first state title. West Chester Henderson was the team who snagged the victory in a classic championship race.

While O'Hara had four seniors on the squad last season, Henderson returns six of the top seven from that championship team led by course record holder and champion Tony Russell and classmate Reiny Barchet.

Though Russell won many big races, Barchet was never far behind. The duo even finished 1-2 in the NXN Northeast Regional race on their way to qualifying for the national finals. This team will have big goals, including repeating as state champions and returning to nationals to get a 2nd opportunity on the big stage. Last season, the team was seen competing in many invitationals to gauge themselves against the competition. As favorites in 2013, will their game plan return to the lay-low style of previous years? Our sources guess yes.

As for Cardinal O'Hara, despite graduating four seniors, they will still be in the mix for that first-ever state championship that has cruelly been so close to being theirs. Kevin James will now lead the way for the Lions. The junior has gone from the back end of the top seven, to one of the top two, to the leader of the team. Jim Belfatto and Drew Pastore will join James as the veterans of the team that has dominated their district and their county the past two seasons.

North Allegheny displayed some of the best pack running during the 2012 season which earned them a 4th place finish in 2012 and makes them a serious contender in 2013. Their top runner from the state final is gone, but the rest of the team is back. In 2012, North Allegheny had three races with 1-5 spreads under 30 seconds. Repeat performances will make them tough to beat this year.

Will the strength of District 1 come through again this season? Teams like Pennridge, William Tennent, Conestoga and Great Valley will look to keep that trend alive in 2013. Each team is talented and will rely on pack running to qualify for the state meet, which will put them in the mix for a high place at the state finals.

Individually, AAA has the most returning state medalists from all the three boys class races entering 2013. Champion Tony Russell is back to defend his crown with teammate Reiny Barchet making them the toughest 1-2 combination in the state. The duo will look to record as many 1-2 finishes as possible in 2013, something that became a trademark of the duo in certain races last season. Repeating as champion is difficult and there hasn't be a repeat champion since Craig Miller won three in a row from 2002-2004.

Returning Foot Locker Finalist Brent Kennedy of Kiski Area was the runner up in 2012, running the 2nd best 5000 meter time on the state course and carries a 9:13 3200 meter personal best to the new season.

The Martin brothers, Colin and 3200 meter state champion Ethan, will also be a tough duo to beat. Ross Wilson of Council Rock North came on strong at the end of the track season, adding a District 1 3200 meter title to his 2nd place 3200 state meet finish to end the track season.

A strong group of juniors will also be mixing it up with the veteran seniors in AAA. Zach Brehm of Carlisle was crowned the 800 meter champion in AAA last year and was one of the best in the event in the US in 2013. What's more, the week after the state meet, he ran a 4:09.27 at Henderson for the full mile. He was outside of the medal places last season in XC, but his breakthrough outdoor season should put him in the mix for the top medal places.

Colin Abert of Easton and Sam Webb of Pennsbury gained valuable experience last year and finished their track seasons on high notes. Both will be looking to improve on their top fifteen finishes at states last year.