Dallas senior Regan Rome has had a remarkable career at Dallas in her first three years. Rome has been a medalist each of her first three years in XC, twice in AAA and in 2012 taking 3rd - leading her team to the podium in 2nd by just three points in AA, and then to the team title in 2013 with her runner-up finish. She is a three-time defending champ in Distirct 2 (2x AAA,1x AA); and capped off 2012 with a 4th place finish at Foot Locker Northeast, finishing 19th in San Diego, just seven seconds from all-American. Her 8th place in 2013 earned her a return trip to San Diego. And Rome is a three time medalist in AAA in the 3200 in the PIAA champs, plus a two time medalist in the 3k at the PTFCA Indoor Champs, taking 3rd in 2013 in 9:53.59 as Tessa Barrett and Courtney Smith both bettered the state record. 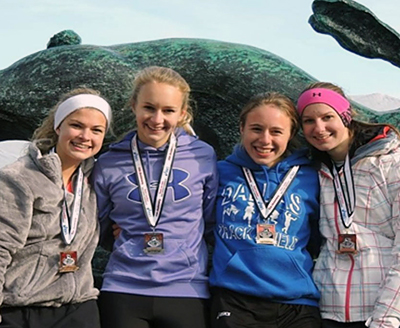 These past four weeks for me and my teammates have been so much fun.  I was able to talk three of my teammates (Ally Rome, Bryanna Dissinger, and Lindsey Oremus) into running the class races at Foot Locker.  This year the girls wanted to continue running after states because we all wanted to take our time off from running in December.

Also my teammate Dominic Deluca decided he wanted to give regionals a shot at the beginning of this season, and Dominic Hockenbury a runner from a school right next to us decided to train with us for regionals too. 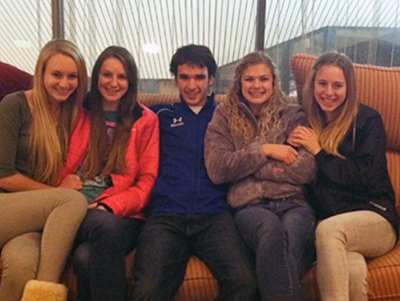 We even gave our little training group a name “Dommy D’s Team of Champions”. Having such close friends to train with everyday made these four weeks extremely fun and we were all able to get in a lot of quality training. 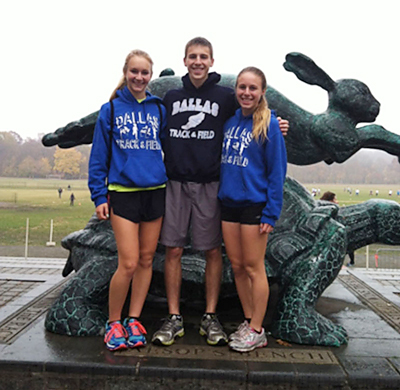 These few weeks I got in the best training I have had since the beginning of August.  It felt great to be running quality workouts and to be doing distance runs again.  Since I had raced so little this season, my coach and I thought that I should get a race in before Foot Locker regionals.  We saw that the NYRR was having an open race at Van Cortlandt two weekends after states, the exact weekend I wanted to race.  Also my teammate Dominic wanted to see the course before regionals so we had planned to visit the course anyway.  I had a pretty good race and was happy with my time of 18:42.  I definitely felt I could have pushed more, but these results showed how much I had improved from states in just a couple of weeks.  This gave me some confidence going into the regional race.

The day before regionals we (Dommy D’s team of champions) all went to New York together in a van my coach got for the trip.  We went to Van Cortlandt and jogged the course first before heading to our hotel.  The Van Cortlandt course is such a cool course to race on and my teammates and I were all really excited to race the next day. Back at the hotel we met up with our friends Coach Butler and Cole Nissley from Lower Dauphin to go out to dinner and spend the rest of the night before the race.  It was really nice to be with such great people and it definitely put my mind at ease about the race.

The morning of the race I was not nervous at all.  I knew where I was in my training and whatever happened I was just going to be happy with the fact that I finished off my last high school cross country season.  It was so cold when I first got to the course, but luckily it began to warm up as the day progressed.  In the class races my teammates all had good days considering they were all peaking for states.  My sister Ally got second in the sophomore race, my teammate Lindsey won the junior race and my other teammate Bryanna got fourth in the senior race.  All three of these girls had really good cross country seasons and have all improved tremendously this season.  To watch these girls all do so well this season was really fun for me and I am beyond proud of them for all of their accomplishments.

When I was looking at who was going to be in my race the race looked like it was going to be stacked and it certainly was.  My race plan was to just try and stay in contention for the top ten the entire way and see if I could pull off a top ten finish.  I had a really good start and was in the top twenty in the woods and by the time I got to the bridge I was somewhere in the top fifteen.  At the bridge I made a move to get into the top ten.  I stayed there the rest of the way, but there was always a pack right behind me.  On the downhills I really opened up my stride and turned over and started catching girls and making gaps between others. 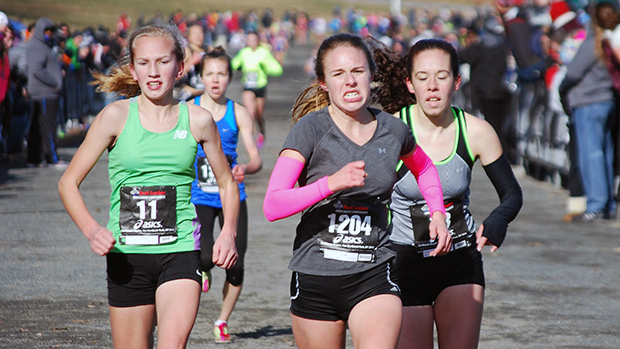 By the time I got on the straightaway I was in eighth and realized that I could actually do this, I could actually make it.  Down that straight away I gave it every ounce of energy I had left to make sure I secured a spot in the top ten.  When I crossed the finish line I honestly could not believe that I had qualified after everything that has happened this season. 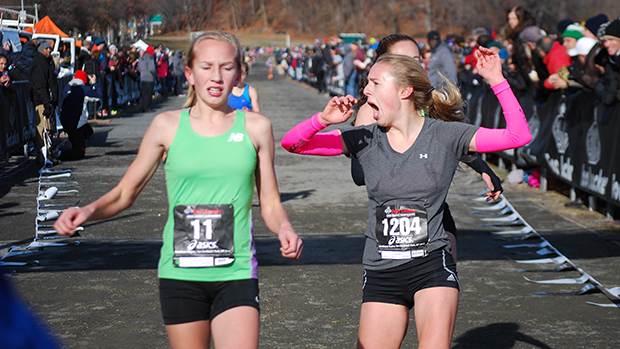 I was even more surprised by my time though; I think I may have even surprised my coach with my time!  If someone had told me the night before that I would have to run close to sub-eighteen to make nationals, I would have said well I guess I am not going to make it.  I never thought I would be able to make improvements like that in four weeks.  It feels great though to be feeling and running like myself again!

After the race I saw one of my future coaches from William & Mary, Coach Walsh, who came to Van Cortlandt to see me race, which was really cool!  Seeing and talking to him after my race made me even more excited to run for William & Mary next year.  So now I am back in Dallas with my family who are frantically changing their schedules so they can join me on this unexpected trip to San Diego.  After so much frustration with injuries this season, I am so thankful to have this opportunity to run one more high school cross country race at nationals.