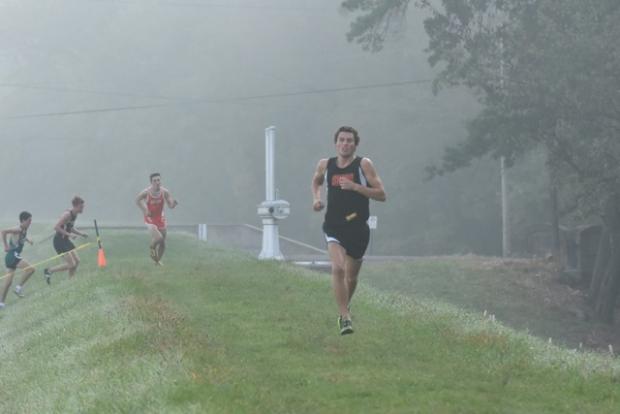 All photos by Barb Krohn

SUNBURY - The Shikellamy Boosters Cross Country Classic - otherwise known as the Heartland Athletic Conference championship - has always been a testing ground for the Districts 4 championships. But with the league meet traditionally scheduled just five days before districts, it's been a gingerly testing.

This year the HAC championship was moved up a week giving athletes and coaches alike a chance to test strategies and some time before districts to adjust.

In the boys race there were the strategies for PA AA No. 4 Isaac Davis and the ones everyone else employed in trying to catch him.

Saturday at least, nobody could.

The Jersey Shore junior did what he usually does - take it out hard.

"I was just trying to run for a time," said Davis who finished in 16:18. "It was not a time I wanted but I have to be satisfied with what I got."

It was still too fast for the rest of the field.

"Today I was hoping to see what I could do against Isaac," said Leeser. "He's strong in the first half. I need to come back strong in the second.

"But he got out to a big lead and I couldn't make it up.

"Isaac just goes out so fast," said Milton coach Tom Leeser. "Our kids were hesitant to go out that fast."

Regardless, Davis said he came into the race knowing he was essentially on his own.

"I had to do it by myself and I had to find a way to come up with the time I wanted."

The 'Shore runner is looking forward to districts and beyond to better his time.

"My progress has been coming but I haven't had competitive races. When states come around there will be a lot of competition to push me."

Though Leeser didn't beat Davis he did lead his team to its first league championship in school history. Now the Black Panthers are eying the school's first district title since at least the 1970s.

At Shikellamy Milton beat Lewisburg 87-93. Southern Columbia, an A team at the District 4 meet, took third with 95 points.

It's been a three-way battle for the overall HAC top three in the regular season with Milton beating Lewisburg, Southern beating Milton and Lewisburg beating Southern at the last quad meet of the season.

Saturday both Milton and Lewisburg placed three runners in the top 15. In addition to Leeser's second place finish, Seth Kendall eighth (17:18) and Nick Doresky was 14th  (17:40). Milton was without its No. 4 runner.

Lewisburg had an impressive performance at the meet considering that the Green Dragons were without their No. 2. Nick Alico took fourth place (16:48), Jack Spaulding running a career best (17:12) was sixth and Zane Yoder was 11th (17:35).

Milton's coach felt his team could have run better in the first half of the race Saturday but was happy with how they rebounded in the second half.

"Mid-way through the race we were out of it - third or fourth place," he said. "I like the way we fought back."

And Coach Leeser knows his team will have to do better to beat Lewisburg at districts.

"Today was a good effort but not what we'll need to win districts."

Especially against a motivated Lewisburg team.

"I'm definitely looking forward to going into districts (against Milton) with a bunch of seniors," said Alico. "It helps that two teams go to states."

Southern Columbia, has had a history making season of its own, winning it's first regular season title in HAC-III, but will have tough sledding in the Class A race against Northeast Bradford. Only one team from the district will advance to the PIAA Championships. 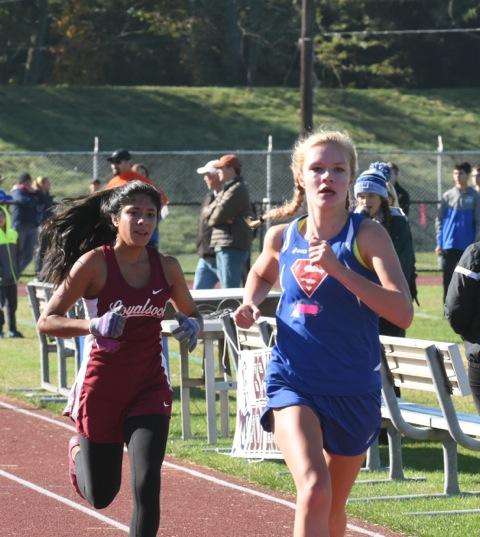 The group stayed together for the first two miles and eventually Blair and Sagar took it out.

"I wanted to push myself for sure," said Sagar who moved to PA from Texas about a month ago. "I was going to go out fast and see who I could stay with."

Blair was happy to have the competition.

"She's good," said the Selinsgrove runner. "You need someone to push you and she did."

Indeed the Loyalsock sophomore decided to try a move in the last 300 of the race.

"I'm not a sprinter so I thought if I'm going to pass this girl, I have to do it now - but it didn't work out."

A matter of opinion.

Because although Blair passed her right back the attempt to stick with the race winner netted Sagar a personal best time of 19:05.

Blair said she achieved her goal for the day.

"I'm very happy," said the senior. "I got first and that was the goal. That helped my team up a few places.

One person she won't have to worry about is Sagar who will be racing in the A field.

And just like Saturday, Sagar is going all in.

"I have high hopes," said the PA newbie. "Whatever God wants." 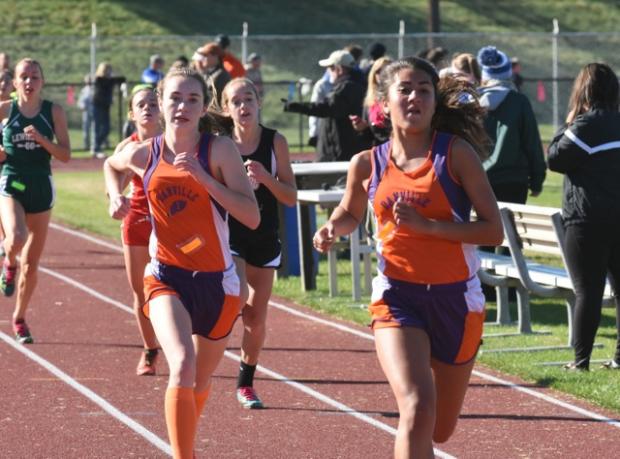 The Ironmen finished second in Class AA in 2015 running behind graduated senior Mackenzie Jones but have lost little, in terms of success this year.

Sophomore Klinger has taken over as lead runner but grouping is what has won meets.

"The girls had a good solid race," said Danville coach Jeff Brandt. "Our grouping is getting better and our times are improving.

"I definitely think this race gave us an idea of what it's going to be like at districts," said Klinger. "But we have to keep moving up (places).

"Other teams have their eyes trained on us."