What's a great weekend of track and field without some drama?

Let's start in District 1, where an email mixup nearly cost the reigning AA state champion in the 100 meters a chance to defend her title.

Girard College's Thelma Davies wasn't on the track for her semifinal heat of the 100 meters Saturday morning. The sophomore standout was heavily favored to win the race, but didn't think there would be a semifinal race. Davies and meet director Ron LoPresti said there was an issue with an email with meet information sent out that originally said there would not be a semifinal heat in the AA girls' 100 meters---just a final later in the day.

LoPresti said 20 minutes later they sent out another email that corrected the mistake, saying there would be a semifinal in the event, which would be contested at approximately 9:45 A.M. on Saturday. Apparently, the Girard College AD never sent the corrected version to Davies' coach, so the Girard College team did not arrive to the meet until later.

The AA semifinals went off at their scheduled times, but Davies was no where to be found.

The results of the semifinals of the AA girls 100m, which don't include Davies. Reason for her absence is unknown #District1Champs. pic.twitter.com/9Iz0IByhqa

Girard College coach Diamond Woolford ran on the infield to plead his case with LoPresti. After some discussion, Woolford asked for an appeal, which was granted. LoPresti called for a "jury of appeals," a meeting of AA coaches, which deliberated on the matter for over a half an hour.

The decision came down that Davies would be allowed to run in a third semifinal heat by herself and she could qualify on time. If she did qualify, she would run in lane 9, a lane on the edge of the track which is not numbered on Coatesville's track but is roughly the size of an normal lane. 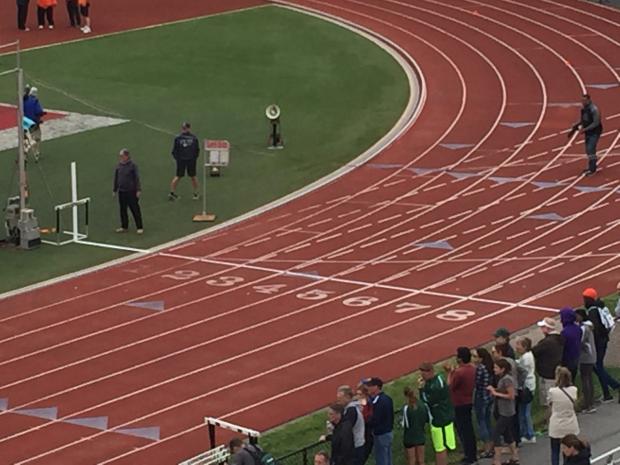 A glimpse at the Coatesville track, including "lane 9" (Photo by Dan Beck)

LoPresti used the United States women's 4x100 meter relay team from the 2016 Rio Olympics as precedence. The women were originally disqualified from their preliminary heat in Rio because of a baton drop. But after an appeal, it was determined that the US women were interfered with, causing the drop. They ran a solo heat of the 4x100 meter relay from lane two, earning a spot in the finals later (which they won).

Running alone, Davies clocked a PA#1 11.63 in her third semifinal heat. From there, she was allowed in the final to be contested later without bumping out any of the original eight qualifiers.

In the finals, Davies won handily, clocked a 11.65 for the win from the outside lane. Watch the final below:

Later in the day, Davies would rebound from a disqualification in the 4x100-meter relay to repeat as District 1-AA champion in the 200 meters, running a winning time of 24.70.

After the race, Davies was relieved.

"It was miscommunication with the athletic director of my school and my coach," she said. "We came a little too late, but my coach talked to the officials and they got it sorted out. It was really stressful because I take the 100 really seriously."

At Williamsport Area High School for the District 4 Championships, we had more madness.

During the third of three heats of the AA boys' 4x400 meter relay, a Lewisburg runner tripped and disconnected the power source to the F.A.T. system, meaning that no times would be recorded.

Mitch Rupert of the Williamsport Sun-Gazette did some great reporting on how everything played out after that. Read his story on the madness.

After the timing system went down, the starter fired the gun while the anchors were halfway through their legs. They didn't listen and ran all the way through the finish.

The decision was made by the PIAA to rerun just that third AA heat two hours later, at 8:30 P.M., despite the fact that Danville Area and Southern Columbia were clearly first and second in the race, which would have earned them automatic berths to the PIAA State Championships. Via hand-times, Warrior Run had run the state qualifying standard, according to Rupert's story. The PIAA would not accept those hand-times.

Rupert reported that coaches proposed alternate solutions, like rerunning the race on Sunday morning, but the PIAA's decision was final: a rerun at 8:30 P.M.

When all was said and done, Danville Area took the win in 3:26.85, while Southern Columbia was second in 3:27.19. Warrior Run, who would have to hit the SQS, finished third in 3:28.17, meaning they also punched a ticket to Shippensburg.

Everything worked out in the end for the affected parties. Check out the AA boys' 4x400m relay results below and read Rupert's full story.