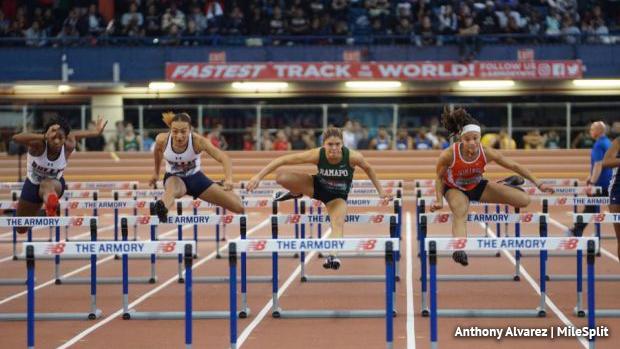 Perkiomen Valley's Christina Warren has wasted no time showing the state and nation what kind of factor she'll be this winter in a variety of events. Warren, a senior bound for Arizona State next year, popped a US#1 in the 55-meter hurdles, outlasting US#2 Grace O'Shea (NJ) and US#3 Lauryn Harris (MD) in the race of the day. That 7.95 is a PR over the 55m hurdle distance for Warren by .01, which she ran at indoor nationals last year.

Warren also leapt 39-08 in the triple jump for the win, a PA#1 and US#2. Warren's start to her senior campaign is impressive and shows a big 2019 is likely in store.

Brianna Smith of Cheltenham was sixth in the 55-meter hurdles, running a PA#2 time of 8.37.

Alina LaForest of Saint Basil Academy showed her stuff in the freshmen section of the 800 meters. The ninth grader rolled to the win in 2:16.56, over 3 seconds ahead of the second best time in the state so far this season.

George School's Sanaa Hebron kept rolling along in her impressive freshman season. Hebron went 24.82, placing second to Leah Phillips of Bullis (MD). That's good enough for a PA#2 for Hebron. She also claimed a win, earlier in the day in the 400 meters, running 55.97, not far off her own PA#1 in the event.

In the mile, Rebecca Wusinich of Friends' Central ran 5:04.94 to take second overall. That time moves her to PA#2 on the season so far.

Liliana Cohen of Germantown Academy kept her impressive junior season going on Saturday, winning the pole vault with a clearance of 12-10. That shoots the PA newcomer to the top of the state rankings on the young season in the pole vault, which is becoming a very interesting event in PA so far.

Calista Marzolino of Abington Heights showed she'll be a contender in a deep girls high jump this season. The senior matched her indoor PR, jumping 5-06 to take second in the event.

Saint Basil's Tia Taylor moved to the top of the state rankings in the long jump. The sophomore standout leapt 18-02 to win the freshmen section of the LJ. It was the second best jump overall at the meet. 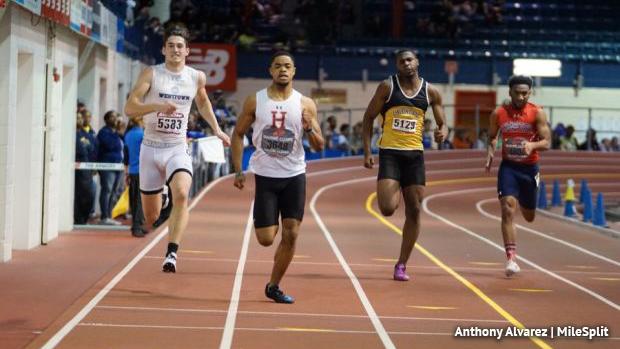 Perhaps the next sprint star in PA has emerged over the last few weeks. Haverford School's Daiyaan Hawkins (above) showed off his speed at the Armory. Hawkins took second in the 55 meters in 6.49 and then came back to win the 200 meters in 21.84. Both times are PA#1 (he's already PA#1 in the 60 meters).

Jonah Hoey of Bishop Shanahan went PA#1 in winning the 800 meters. The junior took third in a loaded field, running a time of 1:56.38 to move to the top of the state rankings. Two others dipped under 2 minutes with Pennridge's Matt Eissler placing 5th in 1:58.56 and Holy Ghost's Jarett Zelinsky was 7th in 1:58.77.

Fleetwood's Jeff Kline took second in the shot put, just off his own state-leading throw. Kline tossed 56-03 for another strong showing. Thomas Kitchell of Notre Dame-Green Pond improved on his season best/PR. Kitchell placed third with a throw of 52-10.75, a PA#2. Kitchell also took fourth in the weight throw with a toss of 58-00.75, a PA#1.

Perkiomen Valley's Cole Peterlin continued his strong season, taking second in the high jump with a clearance of 6-06, a few inches off his T-PA#1 season best. Spring Grove's Colson Martin jumped 21-09 to place third in the long jump (he entered the day at PA#4).