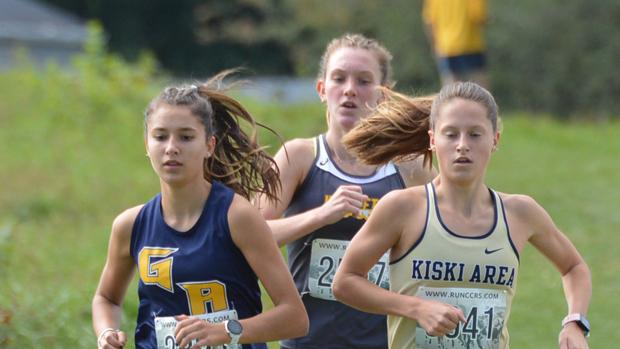 The boys didn't rule the roost at Carlisle. The three C's battled on the Travis Trail, and all three broke 18.

Who were those three C's? None other than Claire Paci (Greencastle-Antrim), Camryn Kiser (Chambersburg), and Carolyn Tarpley (Downingtown West). All three ran personal bests, but only one could come out on top in this fight.

Paci had to out-gut her foes to earn the race win in Carlisle. She didn't know how close the race was, but she knew she was in a tight battle. The race went out quick, but Paci was prepared for it. She reflected on the experience she gained from her race at Red, White, and Blue earlier this year.

Kiser related to Paci's take. She stayed on the gas pedal through the closing mile and came away with a personal best. It was a gut-check of a race down the stretch, but she also knew that sub-18 was in the cards for her finish.

Tarpley finished in third with a 17:59. The star-studded finish also featured Hershey's Brooke Preputnick and Kiski's Eliza Miller. Preputnick finished fourth in 18:08, and Miller finished fifth in 18:22. All five girls sit inside the top 11 of the state rankings.

Hershey, Downingtown West, and Chambersburg had a similarly close battle for the team title. PA #5 Hershey came out on top with an average time of 19:24 and a 1-5 compression of 2:12. They placed four runners inside the top 30 points-paying positions.

It was an important win for Hershey, a team looking to solidify their status as a state contender.

Caroline Gregory defended her title from a year ago in the Challenge division, holding off Lewisburg's Baylee Espinosa and winning in 18:33.

It was a small PR for Gregory, but a PR nonetheless, as she continued her run at an undefeated season.

In her victory, Gregory led Frederick to a 30-point win over Lewisburg.