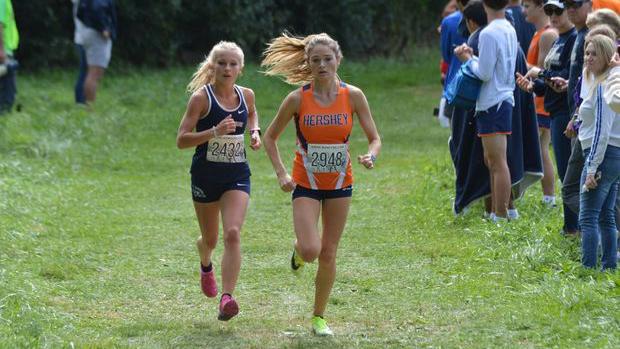 Madeline Murphy of York Catholic is the favorite for the individual win. After running under the 20-minute barrier twice this year, with the fastest being 19:12.80, there is no question Murphy can run a time to make herself a district champion. She also competes well in big races winning the Ben Bloser Invitational and taking second at the PIAA Foundation meet.

Other individuals to look out for are Sheila Driscoll of York Catholic, Lily Asplundh of Kutztown Area, and Claire Thomas of Lancaster Mennonite.

York Catholic will be the team to beat on Saturday. Murphy and Driscoll will need to lead the way and get some low sticks as the Tulpehocken front pack (Vanessa VanTiggelen, Abigail Gehris, and Isabella Headly) will be trying to keep things close in the team race.

Don't count out Susquenita, as they also have a solid trio of front runners (Aubrey Richards, Ayahna Fleisher, and Braelyn Prinz).

Nicole Dauberman of Susquehannock will be the individual to beat on Saturday. The senior is gaining momentum with solid finishes throughout her season. Earlier this month, she had a strong race at the New Oxford Invite, taking first in a time of 18:42.00.

However, Kaydence Strange of Eastern York and Sydney Werner of Conrad Weiser are two athletes having impressive seasons too. After Strange's strong 8th place finish in the White race at the Lehigh Paul Short Run and Werner's 18:50.60 at the Northampton Cross Country Invitational, they both make a case as district champion threats.

Saturday's race should be interesting as Dauberman has already bested Strange and Werner earlier in the season, but every race is a new opportunity to compete.

Addie Cohen of Wyomissing Area, Lila Shore of Trinity, and Aubrey Ressler of Pequea Valley High School are other runners to keep an eye on.

Conrad Weiser will more than likely take things in the team race. With Werner leading the way and a good pack of three behind her (Sarina Neiswender, Indiana Auchenbach, and Kamella Getchter), they have the making of a team chasing after a district title.

Berks Catholic, Bishop McDevitt, and Donegal are other teams capable of mixing things up.

It will be a toss-up in the 3A race as there are multiple contenders for the individual win.

Brook Preputnick of Hershey makes a strong case as the predicted victor after she ran 17:46.00, taking second place in the Brown race at the Lehigh Paul Short. However, Claire Paci of Greencastle-Antrim could be argued as the favorite since she beat Preputnick earlier in the season at the 29th Annual Carlisle Invitational. Paci won the meet in a time of 17:54.30, while Preputnick took 4th after running a time of 18:08.70.

Camryn Kiser of Chambersburg is another one that needs to be included in this conversation as she finished 2nd at the 29th Annual Carlisle Invitational, running a time of 17:57.00.

You also can't ignore the Dallastown duo, Victoria Rodriguez and Kailey Granger, who finished 1-2 at the Ben Bloser Bulldog XC invitational, both beating Kiser, who took 3rd. The duo also had intense races at Paul Short, where Rodriguez took 6th running a time of 17:59.10 and Granger took 8th running a time of 18:00.60 in the Brown race.

It is undoubtedly anyone's race to win on Saturday.

Manheim Township is another team capable of competing with both schools as they've significantly improved from last year.