The Millrose Games has been in existence since 1908. To say it is an historic meet, steeped in tradition, is an understatement.

Begun in an armory by the Wanamaker Department store family, the meet soon outgrew its home and in 1914, moved to Madison Square Garden in New York City, where it remained through 2011 - when ironically - it was moved back to another armory, the New Balance Track & FIeld Center, over 130 blocks to the north.

But no matter what the surface, wood or Mondo, the mile has been the foundation of building the tradition that is the Millrose Games.

In the 81 runnings of the famed Wanamaker Mile (the big boys), 44 different men have claimed the title. But at the top are "The Chairman of the Boards", Eamonn Coghlan, whose seven straight Wanamaker Mile wins were only recently eclipsed by Bernard Lagat's eighth win in 2010.

The High School Boys Invitational Mile was added in 1974. During the ensuing time, there had never been father-son qualifiers - that is until Great Valley PA senior Ned Willig won the Hispanic Games mile on January 7th. His father Hugh; a 4:02c miler while at the University of Pennsylvania; had received an invite and raced at Madison Square Garden in 1979 while a senior a Burnt Hills NY High School. 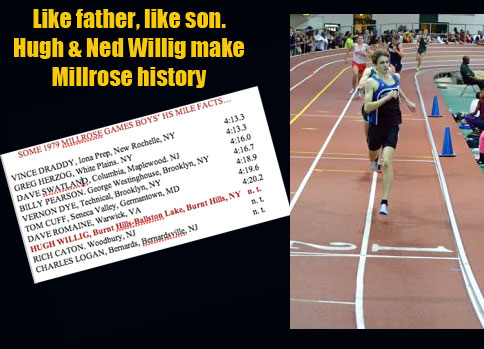 The idea of trying to qualify for the Millrose Games - not necessarily to try to match his father's accomplishment - came up after Ned's cross country season as a junior. The selection of the mile as his event of choice was made, though, to follow in his dad's footsteps. "I have tried to emulate him through the mile, but I really never heard about Millrose until my sophomore year."

Ned had initially shown some miler's speed when he popped a then-PR of 4:22.09 his sophomore spring in track. So in January last year, he selected the same meet and venue - Hispanic and the Armory - to make a try at one of the two auto-qualifiers. His 4:22.43 was his best indoor time, but back in 8th place.

Ned used the experience as a springboard to a breakthrough season in outdoor, moving up the national lists as he dropped his 1600 meter times from a 4:15.24 at Ches-Monts, to a 4:13.86 at the PIAA District 1 meet, to a still-PR of 4:11.99 at the PIAA State Championships.

Ned took his first shot at qualifying at the December 17th Bishop Loughlin Games at the Armory. While his 4:17.47 was a mile indoor PR, only one runner would receive an automatic qualifier to Millrose. Unfortunately for Ned, the first-place finisher to his runner-up time would be by distance superstar Ed Cheserak of New Jersey - who, just a week off his win at Foot Locker Nationals in cross country - would post a US-leading 4:09.90.

Ned was happy with his performance, though. "I knew 4:15 made it from Hispanic last year, so I knew I had a good shot."

Ned and his dad had talked before the race and thought maybe he would push from the front. Well, end of lap one - after getting pinched from the inside spot in lane one at the start - Ned was planted in last.

From Hugh's perspective, it was a long time before Ned started to move up toward the front. But Ned wasn't panicked. "Yes, I went out a little slower than I should have." By the third lap, Ned had moved halfway through the pack. And by the end of a rather slow opening 2:11 800, he had moved into the top group, albeit in lane three. "At points I was thinking about moving into lane one, but that is how the race played out."

Running from the back was not his plan. "But I knew from my workouts that I could go negative."

And go negative he did, as he and New Providence NJ senior Everett Price pushed each other until the final lap. Ned's final 600 was comprised of a blazing 30-31-29 to tally a closing 800 of 2:04.

"I knew it was just Price there, but with such a strong field, I did not want to give up the whole way. I guess I had some left. I felt really strong the last 600."

Mission accomplished. A Millrose HS Boys' Mile slot secured. And the first father-son double in the history of the race.

Larry Byrne, who was the HS Boys Invitational Director for 33 years before stepping down after 2010, says the accomplishment is significant. And he is looking forward to meeting the Willigs on February 11th.

Byrne - whom the event is now named for as "The Larry Byrne HS Mile", actually reached out to the Willig family to let them know a few weeks ago that they would be the first father-son tandem. In the days when the event was solely an invitational, Byrne had to keep track of results through news accounts and contacts in the sport. In December 1978, the Burnt Hills senior Hugh had caught his attention with a 4:21 at the beginning of the season run on the ten lap-square with rounded corners-track at Union College. Burnt Hills usually stayed in upstate for indoor, so Hugh was thrilled to be not only noticed, but selected.

His race was not the one he imagined. "I had never been on a banked track before, never an 11 lap track, and never in a crowd or as big a meet. It seemed as if every three or four strides we were back in a curve."

He believes he ran a 4:21. Byrne confirms that Hugh finished 8th. The timing was all by hand, and they only recorded the top seven times of the ten-man field. Seventh was 4:20.2.

"It's kinda hard to believe after the number of years and number of people who have run it, that no one had a son in it before," says Hugh.

Ned, while pleased, expressed more relief than delight. "It's really nice to get out of the way."

Not just from a pressure standpoint, but from a calendar one as well. Two days after the race on December 9th, Ned was back on the track at the Chester County Indoor Champs, helping his 4x800 to a PA#3 time of 8:07.

And he has plenty left to accomplish. One of his main goals, is to help his DMR earn a spot in the Championship of American DMR at the Penn Relays in late April. They will be running that event at the Yale Invite on January 14th. If that mission is accomplished, he'll have decisions to make on his individual events for the PTFCA Indoor State Champs.

In the meantime, he'll continue training to give his best race at Millrose on February 11th.

It's the first year at the Armory, and there was a lot of energetic discussion when the move was made from the hallowed Madison Square Garden (MSG).

For his part, Ned isn't too concerned about the change in venue. "It would have been nice to run at MSG, but either way, there is going to be great competition. But it's sad it's not at MSG."

Hugh echoes his son's nostalgia for MSG, but opines that if he were competing, he'd rather see it on the faster track at the Armory.

But he's not running. And that means he and his family are in the stands. "The Armory doesn't have nearly the seating."

So while he wanted to bask in the glow of Ned's accomplishment at the Hispanic Games last Saturday, Hugh didn't hesitate to make a beeline for the ticket window on the way out the door. "We bought our tickets for Millrose. We weren't getting shut out."

Video interview with Ned WIllig after the Hispanic Games win