Brianna Schwartz has been lighting up western PA since her freshman year. Now the record holder at the championship venue at Cooper's Lake in Slippery Rock, she had much bigger goals in mind this year. But a disappointing 5th place state finish led to a renewed commitment and focus, resulting in a 4th place finish at Foot Locker Northeast, and an 6th place ALL-AMERICAN finish at Foot Locker Nationals. Here, in her own words...

My training was mainly strength work during the summer and early fall. My coach, Sam Bair, and I decided to skip the first big invitational to continue the hard training. The goal was to maintain high mileage for as long as possible in preparation for a possible extended season, nothing definite. 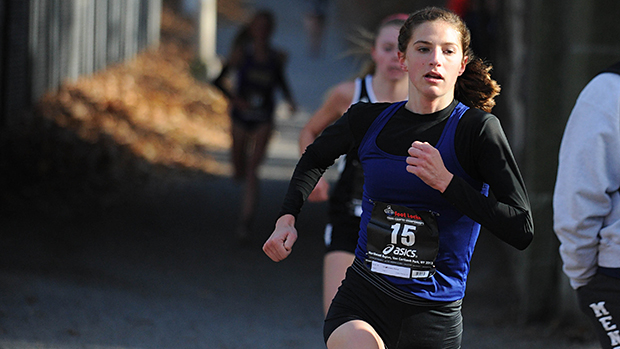 A week or two before my first race, we incorporated speed workouts into the long runs and tempo work I had been doing. The new training schedule worked really well, and I was able to improve each race. I felt great at the WPIAL meet. I was able to set my personal record and the meet record as well. I was extremely excited for the state meet because I had only run a few big races. Feeling strong and fresh, I definitely wanted to contend for the state title. I ran the race to win, and I went out with the leader, Tessa Barrett, wanting to keep the gap as small as possible. Unfortunately, I was not prepared to run a 5:18 first mile, and I could not recover. I was able to hang on for fifth place, but it was a terrible feeling to train so hard and end the season on a race like that. I kept my head up, and after a lot of consideration, I decided I would run Foot Locker Regionals.

In the weeks leading up to regionals, I ran the toughest workouts of my life. I was in the best shape of my life, and I was motivated by my state race in every run. One of my best workouts before regionals was 6x800 followed by 4x200. My coach told me to run anywhere under 2:40 for the 800s. I ran my first one in 2:31, and he thought that was too fast and asked me if I thought that was the state meet. I ran the rest of the workout thinking of the state meet and how I never wanted to experience that again. I imagined myself in the regional race and also thought of the beautiful city of San Diego. My average for the 8s was 2:30.8.

My parents, sister and I drove up to New York early Friday morning to race the next day. I jogged the course, and I really liked it. There were only two hills, and I was excited because, compared to Hershey, those hills were nothing.  My goal was just top 10. I wanted to prove to myself and everyone else that I was better than my state race. My strategy was to start out conservative the first half mile and then start to pick it up and pass people. I felt much better than I did at Hershey, and I found myself in the top 10 pretty early on in the race. I was in seventh and then fifth with 400 meters to go and had enough left to finish fourth. I also ran my personal best time, which was a bonus.  I was also really happy to see fellow PA runners Tessa Barrett claim first place and Regan Rome come in eighth. I was extremely excited. I had no idea what to expect in that race. I would have been happy with 10th place, but fourth was pretty awesome. I was ready for San Diego.

My training leading up to nationals was pretty similar to that of regionals. I think I ran more track workouts to work on speed. I felt very confident in my training as I went to nationals, especially after my finish at regionals. My mom and I headed out Thursday morning to catch our 7:50 a.m. flight to San Antonio, Texas.  From there we met some regional coordinators, and some other runners and went on our next flight. We arrived at Hotel Del Coronado around 3 p.m. One of the girls on my flight ended up being my roommate so we headed down to the Asics Lounge. We got all of our awesome Asics gear and met some other runners. Later that day, we went for a group run. That night at dinner, we sat with the girls from our own region. Everyone was so nice and friendly, and it was cool to talk to runners from different states. We made our own team T- shirts and got to hang out and get to know our teammates. 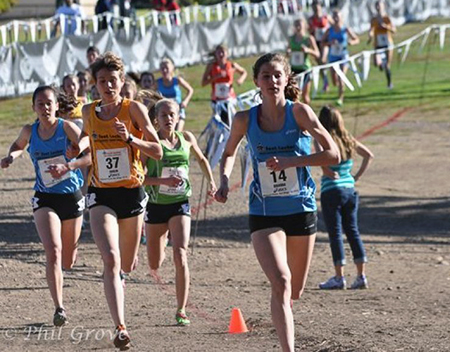 The next day we got to see the course.  Around the course, there were professional runners sponsored by Asics. They came to San Diego for our Foot Locker race! Getting to meet and talk to Olympic runners was awesome. That night at dinner, the same athletes were there and had a panel discussion. Some of the athletes like Adam Goucher and Sara Hall ran Foot Locker themselves. It was so cool to think they sat where we were sitting and then moved on to such great accomplishments. Everyone gave us great advice and was so encouraging.

The next day was race day. We got to the course around 7:30, and the girls’ race was at 9:15. Everyone was nervous, but the professional runners were around keeping us calm. Alysia Montaño sat down with the Northeast girls and played a hand clap game with us before our race! She was so nice and kept us relaxed and calm before the race. Soon, it was time for the introductions, which were really cool. They announced all of our names and accomplishments as we ran out to the starting line. I was pretty nervous, but I was focused and stayed confident.

I had the same race strategy for nationals as I did at regionals. Throughout the first half of the race, I was in around 20th place. I began to move up and pass some girls. I felt strong heading to the hill for the second time, and I was somewhere around 15th and I knew I had to go. 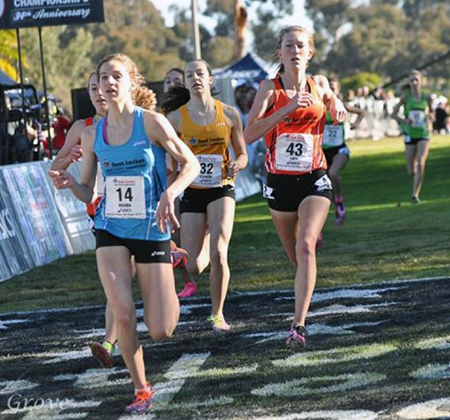 I pushed hard up the hill, down the hill and the slight uphill to the finish. With about 200 meters to go, I heard my mom cheering for me, and I broke into a full sprint. I passed three or four girls on the final stretch to grab a sixth-place finish. I was extremely happy with my place because I had no idea what to expect at the national level. My goal was a top 15 finish to be named All-American.

That race was such an amazing reward for all of my training. Not only was the race a good experience, but the trip itself. I made memories with the best high school runners in the nation and some of the best professional runners in the world, and they will be cherished forever. Foot Locker was an unbelievable experience; running at the national level and having fun at the same time was amazing. Just being able to say I competed at Foot Locker Nationals is an accomplishment, and I feel so blessed to have been able to do that.