PA Girls are tearing up the middle distances. Shannon Quinn is making her mark in the 800. 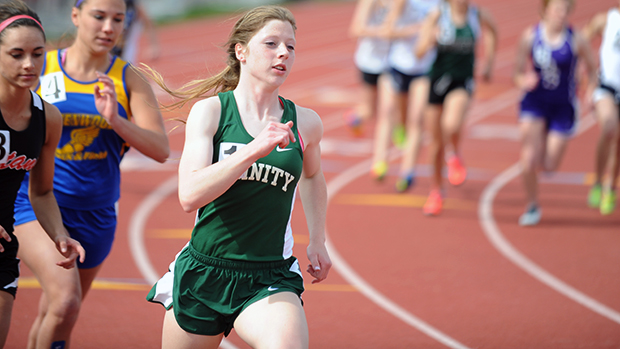 Give her a stick. Or a ball. Or any implement used in any sport, and chances are that Trinity(3) junior Shannon Quinn will eventually excel.

Simply put, she is an athlete. Natural ability. Some amazing natural speed. And a work ethic that is off the charts.

Ironically, it is the work that she would have had to put in outside of a rigorous practice and game schedule as a striker/defender on an elite travel soccer team, that ultimately pushed her to choose track. Specifically, the 800 meter run.

But the journey, and the choice, was not an easy one.

Competition and athleticism are in the genes.

Shannon is the oldest of five children. Her father, Tom, was the competitive guy. Growing up he played football, hockey, basketball. Anything where he could mix it up. Later, he trained for and finished seven marathons - not an event for the faint of heart.

Shannon believes that’s where she and her brother and three sisters get their competitive streaks.

Tom is the closest in age to Shannon. A sophomore, he is also a member of the Trinity track team. “Tom enjoys cross country more than track, and he’s even getting into the throws a little.”

Twin sisters Sara and Claire (or Claire and Sara), keep Shannon looking out of the corner of her eyes. “They’re the feisty, middle kids.” Both are confirmed soccer players who dabble in basketball as well. The girls are also on the track team at St. Patrick’s Catholic School in Carlisle.

It is Saint Pat’s that Shannon really credits with helping her fall in love with track. “In the Harrisburg Diocese, all the other schools would beat us badly in every other sport. But not in track. Everyone wanted to do track and that’s what we’re known for.”

The youngest Quinn is 3rd grader Emily. “She is a soccer player, but already she has run a 7:34 mile” boasts her big sister. “She is shy, but she is already talking about how she is going to take down my records. She is amazing. We’ll see.”

Soccer was her first love. But…

When Shannon was in 6th grade, and the family lived on Lake Champlain in New York, her dad would challenge her to run around the yard to see how fast should could do it. That was the beginning of her running career.

As long as she can remember, Shannon had always been a soccer player. Born in Norwalk, CT, the family has lived in Florida as well as New York. And soccer followed her everywhere she went.

(Note: If she had stayed in Rochester, she would have attended Our Lady of Mercy. In Florida, it would have been St. John Neumann in Naples)

When they moved to Pennsylvania when Shannon was in 7th grade, a travel soccer team was a natural. Eventually she was even good enough to play on a college showcase team.

But something was missing. “When it came to the games, I was just another player.”

Shannon knew that if she wanted to excel in soccer, she’d have to commit a substantial amount of time to drills. Outside of practice.

“It’s easy for anyone to take sneakers, find a good place to run, and then push yourself as hard as you can.”

In 7th and 8th grade Shannon says she won every 800 except one. (She thinks it was Abby Martin, then of St. Joe’s in Mechanicsburg.

Shannon got used to winning.

Running was gaining the edge on soccer.

It’s good to be famous. Even in 9th grade.

Shannon was moving on to Trinity Catholic in Camp Hill for her freshman year. During a summer visit she started a discussion with some boys from the cross country team. “They immediately knew who I was, that I was fast, and that I had run a 61 at the all-league meet. It was actually kind of embarrassing,” Shannon says. “But it was clear that my recognition was on the track side.”

She had not given up on soccer entirely, yet the other running sport, cross country, was not yet on the radar.

Over Christmas break she went with her family to the area where they had lived in Florida and she got together with her old team. She had just gotten new cleats (soccer), and like any smart athlete, she decided to wear them before she really needed them in a game. During warm-up they played a possession game where you score by putting your foot on the line. In one attempt at the line, she hit the ball as well as the ground, and went down hard.

“I was not crying, but the coach knew something had happened.”

In the trainer’s tent she put her weight on the arm and knew something was really wrong. It was a broken collarbone.

Returning home, she was on a six week hiatus from training, and a full three months from competing in anything.

She did all that rehab in half the time.

Before the injury and the ill-fated Florida trip, she had opened her first-ever indoor season at Dickinson College in 2:32.13.

After the fall and the time off, Quinn was, shall we say, highly motivated.

Quinn resumed training, and was ready - really ready by the Mid-Penn Conference meet in mid-May.

She calls this race her breakthrough.

Not shy about leading, Shannon led Chambersburg star Natalie Holder through 600. That’s when Holder took off with Quinn in tow. “She pushed me to a really good time.

Quinn sailed through the District 3 meet and qualified for her first state championship meet.

In the trials, standout and returning AA 80 champ Lilly Brown of Boiling Springs was in her heat. Quinn had a bit of a chip on her shoulder. “I wanted to prove to people that I could do well in prelims. Her 2:18.18 easily qualified… but with a 4x800 on her docket, it was a bit quick for a freshman new to the game.

So what’d she do in her first finals? She stayed with the lead group for the first 400. A quick 400.

“I probably was not in the shape they were in,” Quinn admitted. “But when I finished I was counting and thought I had made the medal stand.”

The fall of Shannon’s sophomore year found her focused on the soccer field. It would be the only season she would play for the Trinity soccer team. She would not quit club soccer until the spring of her sophomore year. Following the soccer season, she competed in some outdoor tournaments… and when outdoor track began, the tournament schedule was not complete.

She had a decision to make.

Quinn has the utmost respect for the soccer coach, and when she approached him about dropping off the team, he was completely understanding.

A month later Shannon knew she had made the right choice. “I was not missing soccer practice.”

Track would be king.

In her first big outdoor race as a sophomore, Quinn captured the big Shippensburg Invitational AA crown, going 2:19.98. Conferences didn’t go as planned… but she bounced back in a big way at the District 3 meet, setting a new PR of 2:14.73 in capturing her first District championship.

Quinn was pumped for the state meet.

This time in the prelims, the pace allowed her to be more tactical. A comfortable 2:21 and a guaranteed spot in the finals was the result.

Waiting for Quinn would be none other than Elk County Catholic star Kennedy Weisner. 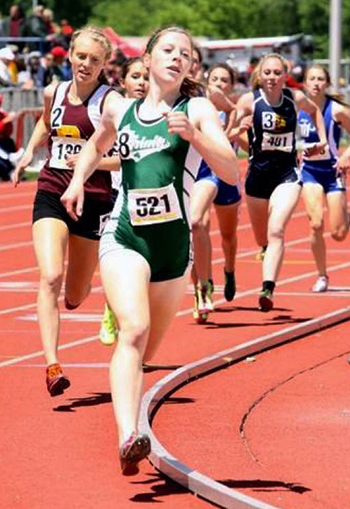 Weisner had had the not-so-awesome luck of finishing second as a freshman and as a sophomore to Homer Center legend Angel Piccirillo, three times - once in the 800 and twice in the 1600.

“I knew Kennedy did not want silver again. But I was the top seed, and after missing the podium as a freshman, I wanted it.”

If there is one thing for certain about Quinn, it is that she does not back down.

It’s not just the competitiveness coming through. It’s a soccer-toughness kind of thing.

It’s one of the reasons she is not afraid to lead.

“Soccer players have the leg muscles to push through the wind. It gives us an advantage over the ‘smaller, frailer’ girls.”

It was windy at Shippensburg for the Saturday finals. Quinn knew she to push. After all, she had soccer muscle. “I couldn’t shy away. I had to push to have a chance to win it.”

Coming through in 63-64 with Weisner right on her back, Quinn knew her strategy could pay off.

This time was harder (than frosh year). “I could see the finish line and there was no one in front of me.”

But she was proud of her season… and the analytical Quinn talked with coaches and decided it was a training issue. That is something that could be fixed.

After her first year of cross country, Shannon is seeing the benefits of the additional strength. She even cut nearly 2-1/2 minutes from one invitational to another on similar courses. 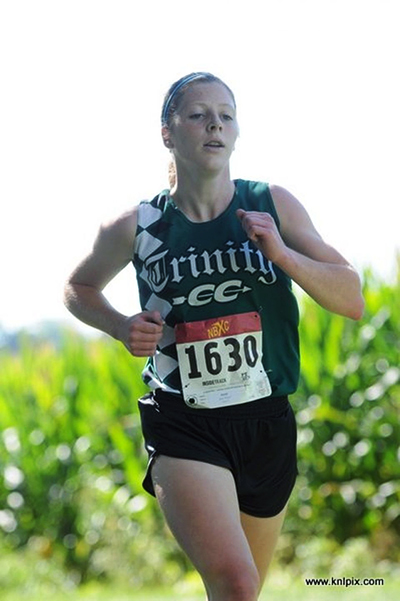 But there was not a lot of time off between seasons…. and with the incredibly bad winter, no one was able to do the quality of the training they wanted to do in December. Shannon was no exception.

Her time was her seed… and her seed was in the 2nd from last heat - or the ‘slowest’.

No worries. Quinn blasted to the front and woke up the competitors in the ‘fast’ heats with an indoor PR of 2:16.45. And then she waited. And when the final lap had been run, her time held up for 7th place and a state medal. “I was really happy that I was able to push myself to that time.” 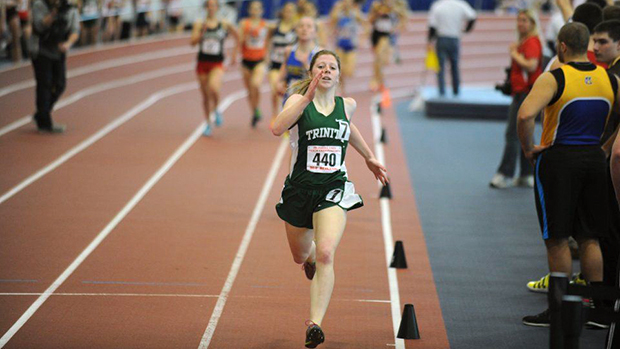 Quinn followed that up with a 6th place PR (Indoor or Out) at the New Balance Nationals Indoor, going 2:14.08 in the Emerging Elite race.

Three weeks later she found herself back outside and running into the wind - a strong, chilly wind - at the Bruce Dallas Invitational. There is no protection from the weather as the school sits at the base of a ridge that serves to amplify wind.

But her competitiveness, along with soccer muscle, powered her to what was than a PA#3 2:17.44.

“I think a 2:17 in the wind puts me farther ahead than past years.”

But it’s her analysis of the race that sets her apart from many athletes.

“Going in I wanted a hard race, AND a SMART race. I now have the experience to have a strategy for every race, from splits to moves.”

Her goals are mainly focused on time. Just like she was when she scurried around the Lake Champlain house trying to show he dad how fast she was.

But make no mistake. When Shannon gets her goal, she won’t be entirely satisfied unless there is no one in front of her at the finish.