Sarah Walker of Germantown Friends continues to amaze those who watch her run and her latest performance was sensational! The junior competed in her main event, the 800 meter run, and she recorded the 2nd fastest time of her career, running a NATIONAL LEADING time of 2:07.56! She didn't do it without some company, however, as reigning AAA 400 meter champion McKenna Keegan of Avon Grove was just under a second behind her, running a US#3 2:08.35, a personal best of 8 seconds outdoors for the junior! The duo of Walker and Keegan are the top two juniors in the country at 800 meters!

What a spectacle at the Abington Invitational, where big marks were flying all over the place on Friday night!

Let's start with the Cheltenham sweep in the girls 100 meter hurdles, where Chanel Brissett edged out Ciara Leonard to lead a 1-2-3-4 finish! Brissett ran 13.83 while Leonard ran 13.84, PA#2 and PA#3 respectively. That puts them within touching distance of Sierra Brabham-Lawrence and her state leading 13.80. 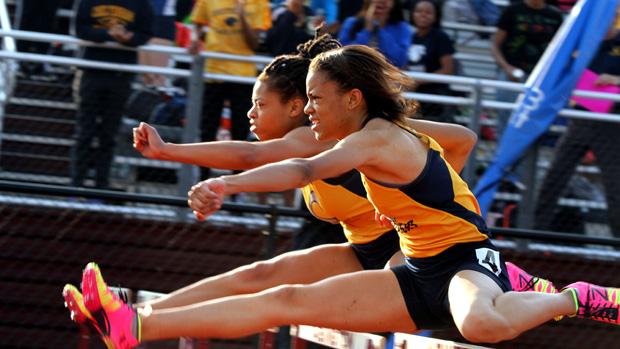 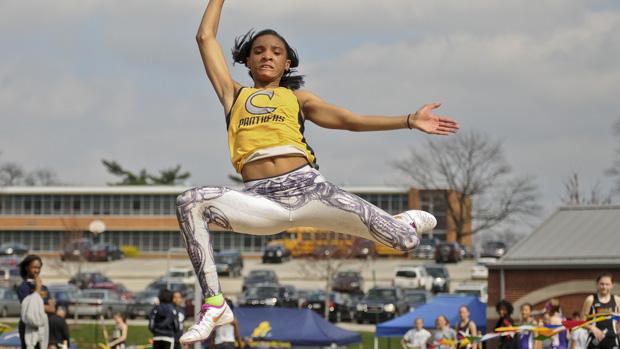 Then the Cheltenham boys joined the party, and it started with Christian Brissett winning the 100 meter dash in 10.82. 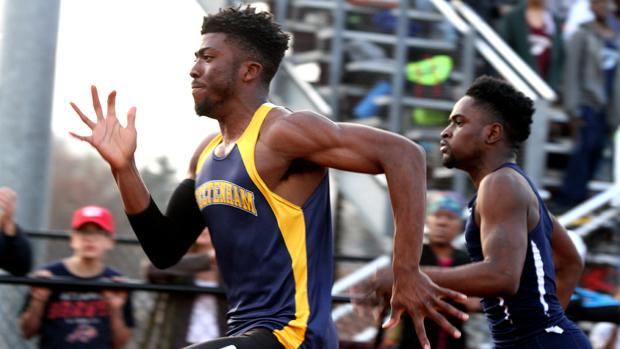 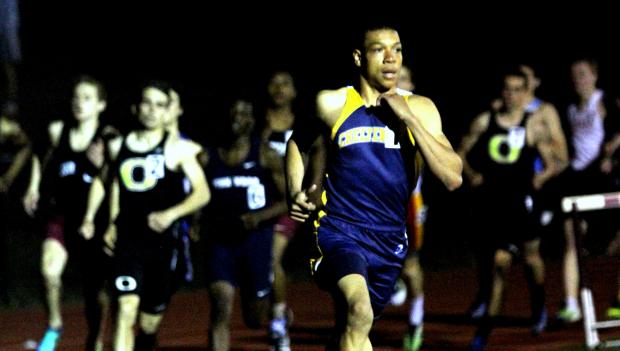 Other highlights of the meet included Erin Sample of Nazareth Academy throwing 42-3.50 to win the girls shot put. Norristown ran a PA#2 3:57.85 to win the 4x400 meter relay, becoming only the 6th team to achieve it this spring. Brooklynn Broadwater of Springside Chestnut Hill improved on her state lead in the 300 meter hurdles with a time of 42.99 and she won the 100 meter dash in 12.11. Jayana Wedd of Norristown ran 25.16 to win the 200 meter dash, good for PA#4. 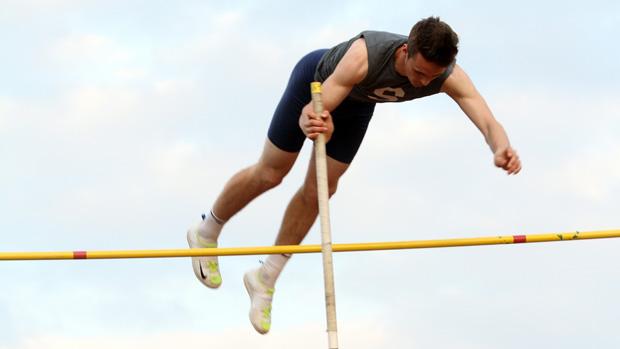 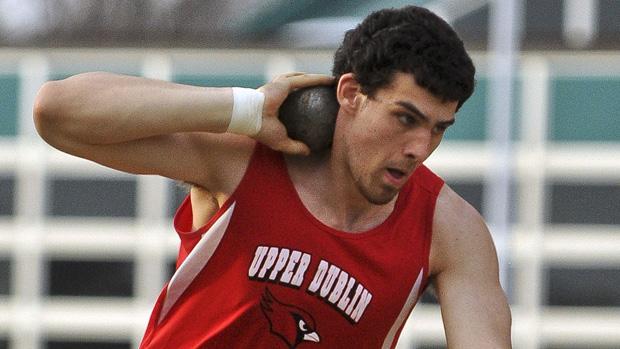 Matt Slagus threw 154-2 in the boys discus, while sister Jessica threw 115-1 in the same event.

Marianne Abdalah of Vincentian Academy continued her incredible spring season with two more victories, winning the 1600 meter run in a PA#5 5:06.79 and the 3200 meter run in a new state leading 10:49.66, becoming the first PA female to break 10:50 this season! She finished ahead of PA#2 Lauren Gronbeck of Eden Christian Academy (10:52.94). 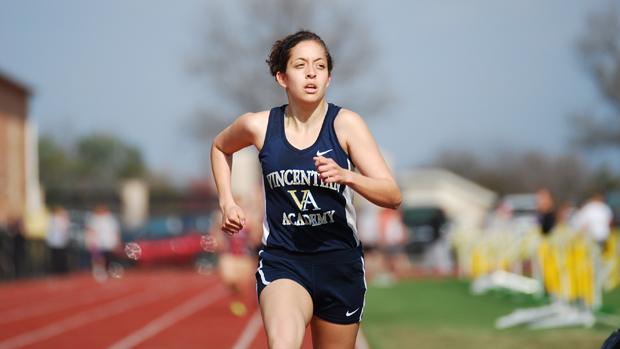 Abby Jones of Franklin Area and Jessica Stever of Indiana Area both cleared a state leading mark of 5-8 in the high jump, with Jones winning the event on misses. Stever did win the long jump with a PA#6 mark of 18-3.25.

For the boys, Jordan Geist of Knoch was back in the game and back at his best, winning the shot put with a US#3 mark of 66-1.50! It is the best mark of his outdoor career and the 2nd time this calendar year he has broken the 66 foot mark! He also added a victory in the discus with a mark of 171-7! 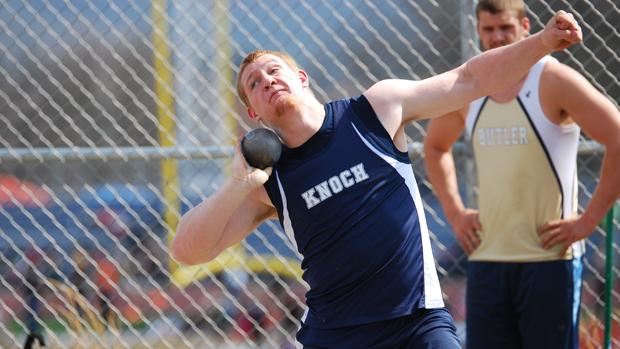 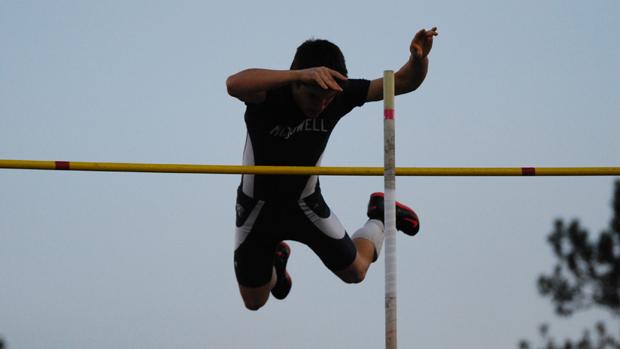 LOCK HAVEN -- Only two meet records went down Friday at the 17th annual Bald Eagle Invitational at Lock Haven University but that didn't mean there weren't some impressive times and marks laid down.

Current AA No. 1 ranked high jumper Lindsey Carl from Central Columbia got meet record honors as she took first in the high jump (5-3) and Mifflin County's Amanda Hassinger broke the 2K steeplechase record with a spirited run of 8:10.74. 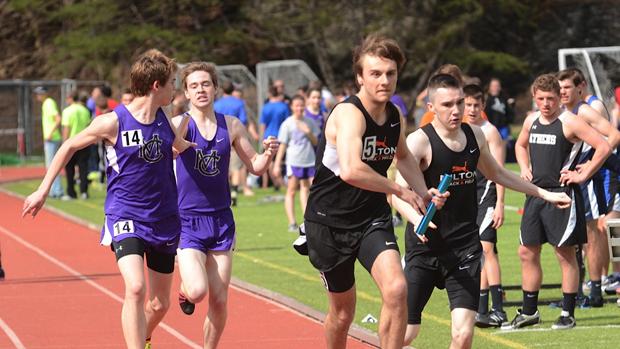 Graham, who hadn't run the 4x800 race since she was a freshman, went out strong in the first lap.

But her 400 lead turned into fourth at the handoff to Baylor.

The University of Texas-bound senior quickly picked off runners though and regained the lead for the Green Dragons by the first 400 and had extended it when she handed off to Martin.

"Over the winter I was injured," said Baylor. "So this is a good step for me."

Martin kept command of the race by focusing on her pacing.

"It was nice to get the opportunity for even splits," she said.

Farmer said it was fun watching her teammates perform.

"I always love to watch my team run a really good race before I run."

In the boys 4x800 Leeser, a freshman on the otherwise all senior team, got the baton to Wargo in second place.

And he didn't want to give his competition the chance to extend the lead.

"I knew if I didn't catch up with him and break him, I didn't have a chance."

A footrace with Mifflin County's Evan Becker gave Lewis a step on Anthony Shifano at the handoff.

And Lewis kept almost exactly that lead when he handed off to Heidel.

"I was trying to give Wade the lead," said Milton's third leg. "I don't want to be that kid that lets everybody down."

By the time Heidel came down the home stretch he didn't have to worry about Mifflin County's Keenan Walker as much as dodging the runners he and Walker had lapped.

He didn't seem to mind.

Milton went on to sweep the relays Friday with Heidel running anchor in all of them.

Gambrell shines, Molino retools and a battle in girls 400

Athens freshman Breanna Gambrell already the top-ranked AA girl in the 100, added another AA No. 1 when she won the long jump with a leap of 18-1.

Gambrell responded with two jumps that bested that -- her winning response was an 18-1 mark that tied the Athens school record.

"I think it was an adrenaline rush," she said all smiles after the final big one. "I was in second and I wanted to win." 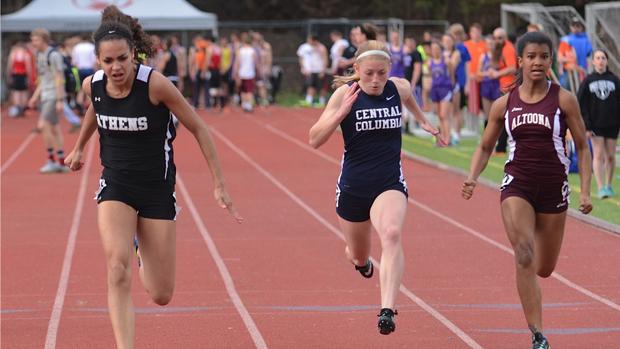 The two-time AA cross country champion was working his way back after an injury discovered after his win last fall.

"It was so disappointing," Molino said. "I wanted to go to cross country nationals and indoor nationals."

Getting back to work in mid-January Molino said he is working to peak at the right time this year.

The girls 400 looked to pit Northeast Bradford's Lydia Werner and Lewisburg's Jenna Farmer who were seeded within 13 hundredths of a second of each other.

But it turned out that Breanna Gambrell isn't the only Athens freshman standout. Coming out of Lane 6 teammate Emily Lunger just edged Farmer for the sub-60 win.

"I don't think people were going to expect that from me," said Lunger whose previous PR was 1:01.80. "It gets better from here I hope."

In the girls pole vault South Williamsport's Kaite Jones won with an elite jump of 10-6 and in the boys division Central Columbia's Mitch Riddick and Mifflinburg's Easton Plummer tied with elite jumps of 14-0. 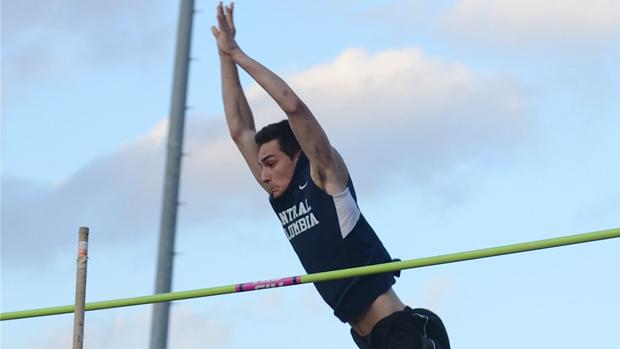 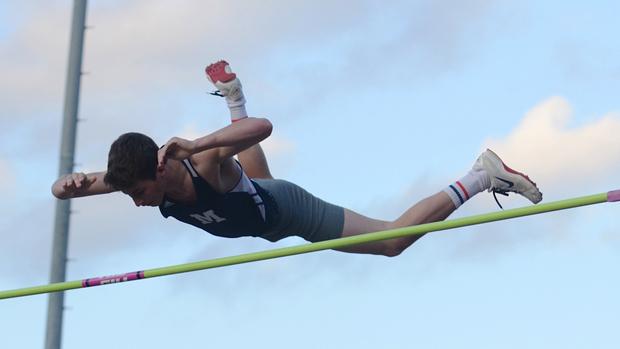 A hot but sunny day was a welcome sight at the annual Shippensburg Invitational and the athletes did all they could to take advantage of the beautiful conditions.

AA Boys featured the reigning 100 meter champion Jahvel Hemphill of Bloomsburg returning to the place he won the state title. On his return, he won the 100 meter dash in 10.97 to maintain his place as the man to beat in his main event. 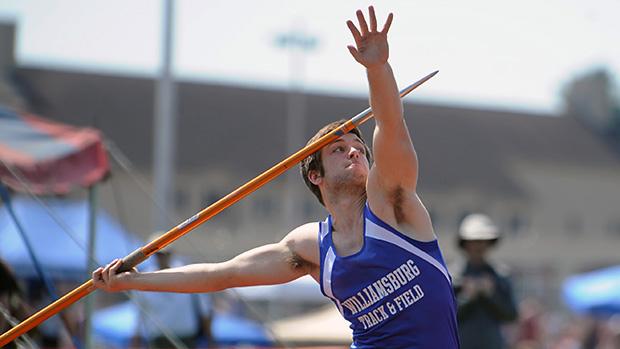 In AAA boys, we saw Colin Abert of Easton return to the form that had people calling him the best distance runner in the state of PA. Abert ran the 3200 meter run and became the second athlete this season to break 9:20. His PA#2 time of 9:17.75 just misses the 9:17.33 state lead held by Sam Ritz of Germantown Academy. Sean Widener of Lower Dauphin was 2nd in a PA#5 9:25.75. 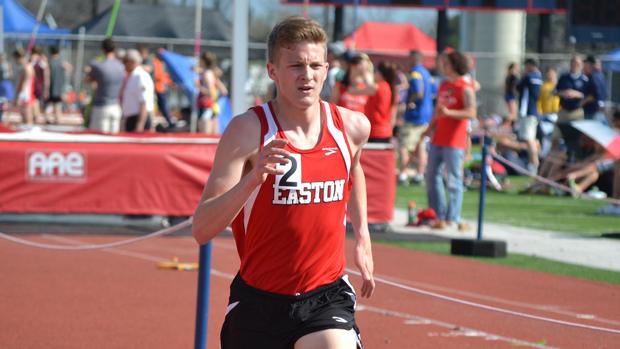 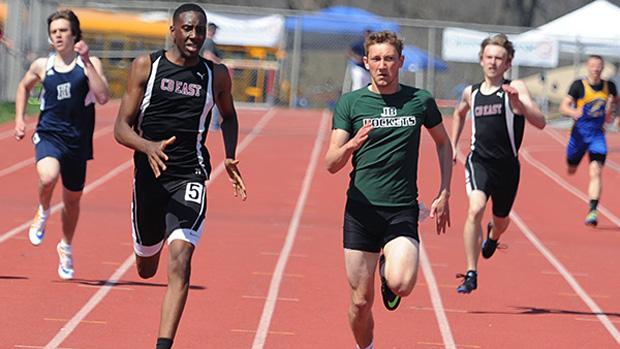 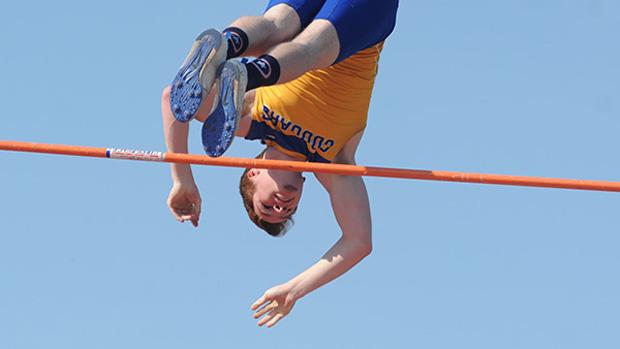 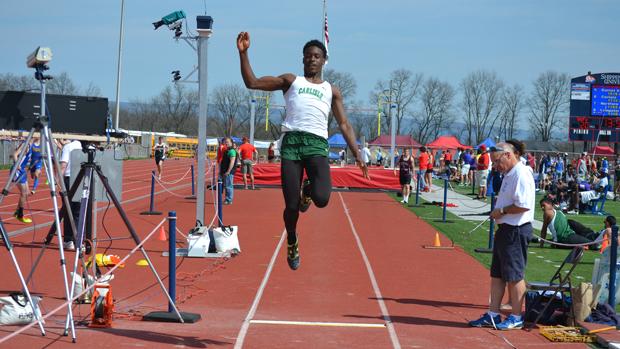 In AA girls, Shannon Quinn of Trinity (3) put herself in the spot of favorite in the 800 meter run at the state meet after her solo performance of 2:13.51, good for PA#3! 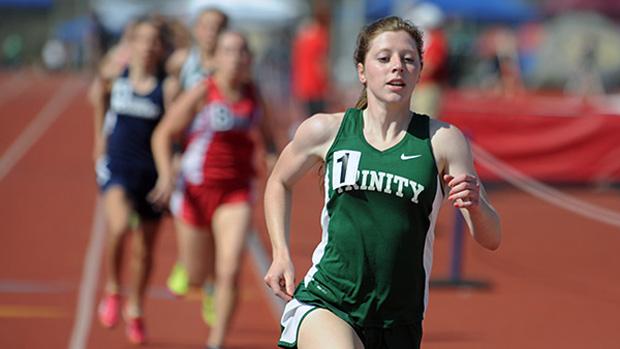 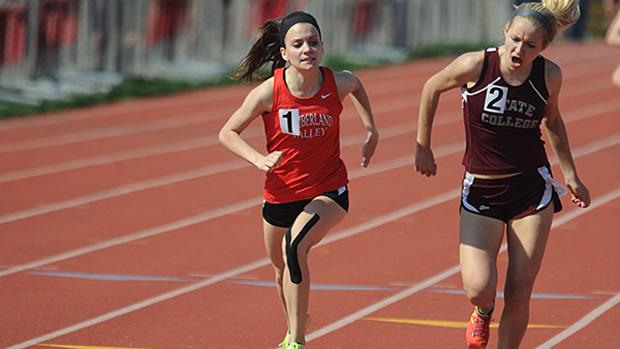 Erin Winters of Lebanon, Kennedy Shank of Northern, and Megan Fry of State College all cleared 11-9 in the pole vault, with Winters earning the victory on misses. Veronika Karpenko of State College had the best meet of her career, setting a new state leading mark in the long jump with a mark of 18-11.50 and a PA#2 mark in the triple jump of 38-11.25. Emily Stauffer of Cocalico threw 45-7.75 to win the shot put. 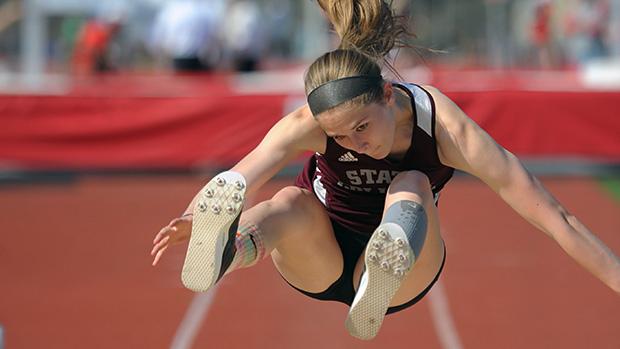 For the boys, Upper Darby created some distance from themselves and the chase pack in the 4x100 meter relay with an improved state leading time of 42.22 to set a meet record. They also ran a meet record 1:28.50 to win the 4x200 meter relay, and they ran 1:03.93 to win the 4x110 meter shuttle hurdle relay. State leader Andrew Diehl of Conestoga jumped 6-7 to win the high jump. Evan Sing of Penncrest threw a US#5 202-4 to win the javelin!

For the boys, Austin Aikins of Hickory dazzled in front of the home crowd with victories in the shot put (53-7) and the discus (PA#4 167-4). Grayson Hill of Cathedral Prep threw 189 feet even to win the javelin.

Imhotep Charter went down to Maryland to compete and they were led by a 22.10 performance by Ade Roundtree and a 43.30 performance from their 4x100 meter relay team.

Khyasi Caldwell-Adams of Pocono Mountain East jumped a big 19-2 to win the long jump. It is her 2nd meet with a 19 plus foot mark this season, and she has the two best long jump marks in the state this season!

Lucianne Burner of North Pocono cleared 11-6 to win the pole vault. Aspen Gaita of Stroudsburg ran 14.98 to win the high hurdles and 46.34 to win the intermediate hurdles. Maggie Toczko of Tunkhannock ran 11:13.12 to win the 3200 meter run.

Ty'Asia Dansbury of Harrisburg improved her state leading time in the 200 meter dash with a winning performance of 24.13! Sierra Brabham-Lawrence won the triple jump with a state leading mark of 39-1.25 and she won the high hurdles in 14.29.